A great attacking performance is such that at first viewing it inherently seems defensive. When Ajax beat Liverpool 7-3 in the European Cup over two legs in 1966, Bill Shankly peculiarly declared that “they were the most defensive team we have ever met.” Then there were the two famous 5-0 wins over Real Madrid: the first, by AC Milan in 1989, which put Arrigo Sacchi on the map; while in 2010, we remember mostly the way Barcelona kept the ball, in particular the controlling forces of Xavi and Messi, but just as important was the way they pressed their opponents, hunting in packs to win the ball back.

Great attacking teams don’t just throw caution to the wind when they go forward; effective attacking play is predicated on a solid defensive foundation which allows those players to flourish. That’s what set the platform for Liverpool’s 5-1 of Arsenal at Anfield on Saturday. True, they looked like they could score with every chance such was the regularity they got behind Arsenal, but it was the swirling press of red shirts that was just as memorable, surrounding the Arsenal midfielders in possession and blocking potential passing lanes. And when they regained the ball, the pace and trickery of Suarez, Sturridge, Sterling et al. put Arsenal to the sword. After the game Steven Gerrard said: “That is right up there. We have absolutely demolished a top team there from start to finish. I am trying to think back of a better performance, especially in the first half, that I can remember in the last 15 years.”

It’s indicative of the way Liverpool worked as a team that their best defensive player wasn’t a member of the back four nor a central midfielder: it was Philippe Coutinho. The Brazilian won 6 tackles and made 2 interceptions, but was most impressive was the way he filled in the gaps when players moved out of position. In fact, Liverpool’s system is all about little chain reactions: when one players moves, it activates the trigger for another to move into the space. What Coutinho did so well was to make Liverpool’s formation move from a 4-4-2 at various times, to a 4-2-3-1 or 4-3-3.

At times he would play behind the forward – or both when Luis Suarez drifted inside – or drop in as the left-central midfielder, allowing Jordan Henderson to cover the right-hand side of the pitch if Suarez didn’t get back. It was probably significant too, that Coutinho played on the left-hand side because that’s where most of Arsenal’s build up happens. 43% of Arsenal’s attacks went down that way with Bacary Sagna and Alex Oxlade-Chamberlain passing to each other 29 times in the game, second after Wilshere and Arteta who found each other 39 times.

The reductive way to analyse the game would be to say that if Liverpool didn’t score early, perhaps the game wouldn’t have gone in Liverpool’s favour. Because after all, two-thirds of their goals are scored in the first-half while for Arsenal it’s the exactly the same but in the second-half. But it did happen, and the galling thing was that Arsenal continued to (or rather Liverpool forced them to) make the same mistakes over and over again: 3 out of 5 of Liverpool’s goal came from a loss of possession somewhere along the line.

For the first goal, Per Mertesacker let the ball run and Luis Suarez was quick to seize on that to win his side a free-kick. Goals three and four then came from Mesut Ozil giving the ball away cheaply, but by that point Arsenal had started to over-expose themselves on the counter-attack. There were the others too. When Daniel Sturridge went through on goal in the twelfth minute, it started from Ozil again selling Wilshere short. Another chance, which fortunately led to a comfortable catch for Szczesny, originated from a static Wilshere unable to reach Arteta’s pass.

Credit must go to Liverpool for forcing those errors but as was the case earlier this season when Arsenal were punished on the break to lose 2-1 to Borussia Dortmund, the team was “naive”. Instead going all out for a way back in to the game, The Gunners should have looked to compromise. Arteta should have dropped deeper – Wenger’s also culpable for that – when he saw that Mertesacker in particular, was struggling against the number of runners Liverpool committed. The full-backs too, inexplicably continued to bomb forward which not only exposed Arsenal on the break, but left the team isolated in centre. Indeed, this is an issue that I want to talk more about in detail because far from being a substantial flaw in Arsenal’s system, it’s something I feel opponents – good opponents – can take advantage of. 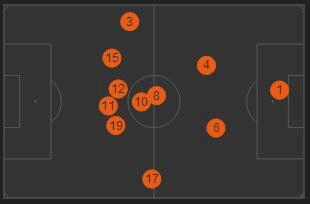 If you look at the average pass positions of Arsenal’s players (left), you can see that the full-backs are way up the pitch. For me, this was strange a move because that means they are not available to receive the ball when Arsenal have possession at the back. If you think about it simple terms, when playing up against a 4-4-2 as Liverpool loosely played, the centre-backs are marked by the two strikers so that means the full-backs receive the first-ball.

Except for Arsenal, the full-backs continually went away from the play and as such, they were never really able to get on top of Liverpool’s press. Of course, this was probably a purposeful ploy from Wenger because by pushing his full-backs up the pitch, his aim was to take the Liverpool markers with them. However, the Reds didn’t rise to the bait. Instead they remained organised, kept a close eye on the play and narrowed the angles to make the pass.

This idea of verticality can be a problem when teams play high up, as we have seen against Southampton, Everton, Manchester City to name three. Wenger’s aware of this, but he places great faith on his two centre-backs to pass the ball out and one of the central midfielders, usually Mikel Arteta dropping in. He says: “The teams close us down so much high up because they know we play through the middle. I push my midfielders a bit up at the start to give us more room to build up the game. When you come to the ball we are always under pressure. I am comfortable with that, although sometimes it leaves us open in the middle of the park. We want to play in the other half of the pitch and, therefore, we have to push our opponents back. But my philosophy is not to be in trouble, but to fool the opponent into trouble.”

What Arsenal do is, instead of opening the pitch horizontally to evade the press as other possession sides usually do (typically that means splitting the two centre-backs wider and dropping a midfielder in between or asking one of the midfielders to move laterally), they push the team up the pitch to create space in the middle of the pitch for one of the central midfielders to pick up the ball in extra space. The problem is when say Wilshere (who is not very good with the ball deep) or Arteta get the ball there, they’re often isolated and thus easy to dispossess. If you cast your mind again back to the average pass positions diagram, you can imagine that once Arteta or Wilshere pick the ball up in that position, they have to then try and find a way through a line of red shirts with a pass.

If they don’t, then it can prove catastrophic as Ozil continually found when he dropped deep and instead, was forced to pass backwards or attempt to dribble through. Bear in mind there is no right or wrong way – Liverpool have often been in uncompromising situations when they split their centre-backs – it depends on how well you execute your plans and Arsenal are better than most. Except, this time, Liverpool made exposed them in a way Arsenal should have when Skrtel and Sakho had the ball at the back).

Olivier Giroud came under a lot of stick after the game for not being more of an outlet for Arsenal either with a pass behind or simply by running the channels and opening space for someone else. Indeed, it’s even arguable that Arsenal don’t use him enough as a target man to bring more variety into their play – or rather that they can’t because his ball retention is wildly inconsistent. It’s more convenient (and frustrating as well) to think of Giroud as an extension of the midfield, another pass before Arsenal eventually get inside the box.

There is a valid assertion that, despite what has been a credible title challenge (contrary to what the media might say), Arsenal could be doing more going forward; that they could dominate games better and create more chances. Up until this point, the defence had been the one area that has excelled – and has arguably elevated expectations. The galling thing is though, the strategy that has served them so well, dropping off, soaking up pressure and gradually working a foothold in the game, should have worked better against one of the bigger sides.

Except, the bigger sides never let you play on your own terms – something Arsenal have probably gotten away with against teams lower down – and they never reacted once they went a goal down early and were asked to play more expansively. Of course, there’s a psychological element at play too: each goal drew Arsenal more and more desperate and clouded their decision-making. But we have yet so see both sides of Arsenal’s game click for more than a few isolated matches, while thrashings handed out to their opponents have been rare.

Wenger hopes Arsenal will react with a more mature defensive performance but as Liverpool has shown, attack and defence are relative and when in sync, it can be devastating.