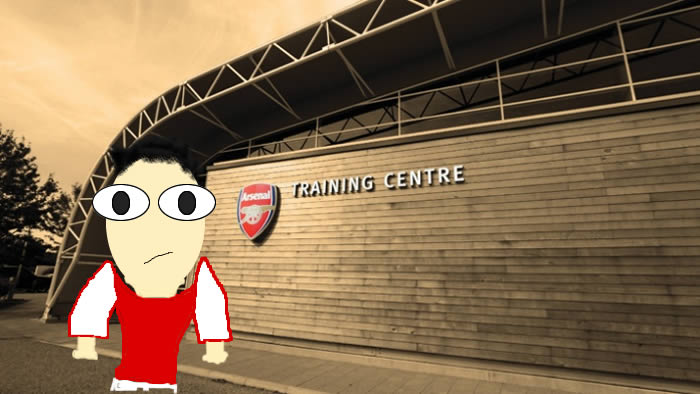 Yesterday saw the raft of inevitable ‘We must do better’ reaction pieces from the players. They are, like it or not, a fact of life. Some people bemoan their existence. I understand that.

What does it matter if Per Mertesacker says, “We feel very bad at the moment, disappointed with our performance right from the start. It was just not good enough”?

Does it make any difference that The Ox says, “We know we are better than that. It is our responsibility to turn that around and we have great opportunity on Wednesday night”?

Or that captain Mikel Arteta calls for unity? – “Normally, after a game like that, you tend to blame each other for mistakes in the game. I don’t think that is the right thing to do. We need to be realistic and improve on what we have done.”

It is the give and take of modern media. The demand for content means that you have to take the rough with the smooth, and to be fair there’s been a lot more smooth than rough this season. There’s very little else the players, or the manager, cay say other than ‘We’ll do better’, so there’s little point getting bent out of shape about it. You can always choose to ignore it.

Here’s a question though: isn’t it better (relatively speaking) to be get beaten occasionally by a glut of goals than lose consistently by a tight margin? I suppose that’s the difference between us and Man Utd this season. We’ve had one opening day disaster, a couple of hidings and a single goal defeat to them at Old Trafford. They’ve been turned over 8 times already this season, had a Capital One Cup semi-final humiliation at the hands of a keeper that most Arsenal fans thought a nice chap but not up to the standard required, and they, like us in seasons past, struggle to maintain any consistency.

Of course not getting your arse handed to you away from home, thus engladdening tedious Mugsmashers (including a number who thought it would be nice to come onto Arseblog News to try and comment and call us silly names), would be a much better strategy but unfortunately we don’t get to pick. When it boils right down to it, any loss is just three points; whether you get fisted by Hellboy, like we did on Saturday, or you concede a late goal in a game you dominated.

We did try and make some sense of it, to try and achieve some perspective, on yesterday’s Arsecast Extra. It’s very difficult to find the right answers when you see a performance as pitiful as that but all you can really do is hope it was just one of those days. That we’ve had one of those days twice this season does indeed lead you to worry that we’re capable of doing it again, you’d just like to think that professional pride would prevent it. Spank me once, shame on George W Bush and all that.

There were a lot of questions about Mesut Ozil and whether or not he should start tomorrow night. My feeling is that he certainly should, simply because he’s one of our best players. Nobody would argue against the contention that he’s struggling for form, or that he had a woeful day last Saturday, but he was hardly alone in that.

There’s a reason he cost as much as he did and it wasn’t just good bargaining on Real Madrid’s part: it’s because he’s one of the best players in the world. Yes, he’s got step up and show that, but I think if Manchester United come to our place tomorrow night and see an Arsenal team-sheet without Ozil on it, they’ll be thinking ‘Thank you very much’. And I don’t want to do anything that would make them even remotely happy.

I think Arsene Wenger is a man who, more than anything, trusts in the overall quality of his players, allowing them to play through periods of fallow form. Sometimes there’s an element of expediency in that, lack of options or genuine alternatives makes it easier to stick than twist, but I think he’ll stick with Ozil tomorrow night (unless there’s something badly wrong behind the scenes we don’t know about).

It can often be a case that a moment in a game can be the turning point, and there’d be no better game for Ozil to produce something in than tomorrow night, especially with the double cup tests coming up this week also. There will come a time where you have to seriously consider taking him out of the firing line if things don’t improve, but I don’t think we’re there yet and tomorrow night is not the night to do it, that’s for sure.

In other news, Lukasz Fabianski has confirmed he’ll leave the club this summer, which is not at all unexpected. I think as a number 2 he’s as good, if not better, than most in the Premier League but he is not willing to live the life of a Stuart Taylor, and wants to go play on a regular basis. Good luck to him, at 28 he’s still young enough to play for plenty of years to come, and I hope he finds the right club.

What it means, however, is that Arsenal have to be in the market for a keeper this summer. EmilianoViviano is unlikely to have his loan extended, which means we’re looking at youngsters like Damian Martinez, Dejan Iliev or Matt Macey, and although we went through the 2003-4 season with Graham Stack as back up to Jens Lehmann, you do have to think in this day and age you need a bit more experience than that. So, a chunk of the summer budget has to go on finding a new keeper.

Young Costa Rican striker Joel Campbell is liklely to be another ‘departure’, so to speak. After a ridiculous saga trying to sign this lad in the first place, we’ve loaned him out to Ligue 1, La Liga and now Olympiacos where he wants to stay. That he was sent out on loan despite getting a work permit, while we kept Ryo Miyaichi, probably tells its own story, but all things considered this, for now anyway, appears to be one of those deals that really wasn’t worth the time or the effort.

News from the manager’s pre-United press conference, over on Arseblog News. More here, with a preview of that game, tomorrow.