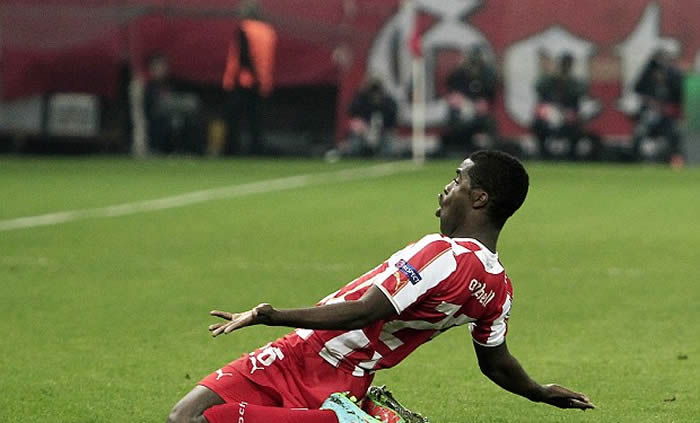 Arsenal have had some Campbells down the years.

There was Kevin. Striker (didn’t always get things Wright). Sol. Defender (hilariously nicked from Sp*rs). And before the days of the Rob the Chef there was Oxtail. Soup (served daily in the canteen).

Now there might be another one on the horizon. Joel. Forward (makes Rio Ferdinand look statuesque). You might remember we spent half a summer in Costa Rica trying to find this guy’s real agent and when we did we signed him up and everyone was happy except our application for a work permit was turned down and then Cesc left and Nasti left and then everyone was glum.

That was the summer we went on to get beaten 8-2 at Old Trafford, by the way (just to provide some context). So our only option was to loan him out. So, he went off on his travels:

Then, last summer, he was granted a work permit but instead of integrating him into the squad we sent him out on loan again, this time to Olympiacos. I have to say I thought that was pretty much that. Sending him away and keeping Ryo Miyaichi, for example, seemed implicit backing of one over the other, and as Miyaichi is a long, long way from ever playing first team football for us, I thought that might a measure of Campbell’s quality.

Last night, however, he showed he might well have something to offer. That was his eighth goal of the season (just 2 yellow cards), and he did it on European football’s biggest stage against one of European football’s biggest clubs. Ok, so that club might be playing like Superman with Kryptonite boots who ate some bad prawns and spent all night spewing lava-hot bile from both ends, but still.

Quite a goal it was too. Sure, Ferdinand is more Franz than Rio these days, but he curled it into the bottom corner from 25 yards, leaving de Gea flapping at air. Olympiacos went on to win 2-0 and afterwards that well known cultivator of team spirit, a man not known at all for putting his personal concerns above that of the collective, Robin van Persie, finally snapped because what’s happening at United doesn’t suit him (maybe he should pull that old trick of going ballistic at the manager in the dressing room like he might have done at a young player struggling for form a couple of seasons back before that young player landed him on his arse with a punch. Or maybe he’s learned that particular lesson. I hope not though).

Anyway, away from less salubrious characters and back to young Campbell. Interestingly, on the eve of last night’s game, he spoke about how much he wants to get a chance at Arsenal.

I believe I am ready to play for Arsenal next season. I know I have the capacity to play there. I am only waiting for the opportunity. With hard work I know I can get there. I have been an Arsenal fan since I was a child and that’s why I chose them. This has been a very good experience. I am trying to do my best, to do better and continue growing as a footballer.

We obviously saw enough in him in the first place to waste valuable time trying to sign him, so now that he’s playing regularly and showing that he’s capable of doing it at Champions League level, you have to say he’s doing all that can be asked of him.

Often players go out on loan because it’s obvious they don’t have what it takes to make it at Arsenal. It’s dressed up as development, but basically it’s shop window stuff as well as giving them a chance to play at a level that might suit them better. But for some it’s kinda sink or swim, can he do it? Will he be able to make the step-up? And Campbell showed last night that he just might.

There’s still the tendency to run away with things, to overplay the quality of a young player who did something good – especially against United and especially when there are still doubts over our depth in the forward positions – but if he continues to perform and to score for the rest his loan spell in Greece, then he’ll certainly give the manager something to think about this summer.

In other news, Kieran Gibbs may be fit for this weekend. Caveat: that’s according to his agent who Tweeted (note: he did not take to Twitter) to allay fears he’d suffered a serious hamstring injury. Good news if true, especially given that Monreal’s ankle is something of a concern and Thomas Vermaelen is still in the Twilight Zone. The more fit and healthy players we have the better.

And finally, Johan Djourou says he’d be on for a permanent move to Hamburg if all parties could work it out. Which is probably for the best, even if having centre-halves on our shopping list this summer has to be one of our highest priorities.