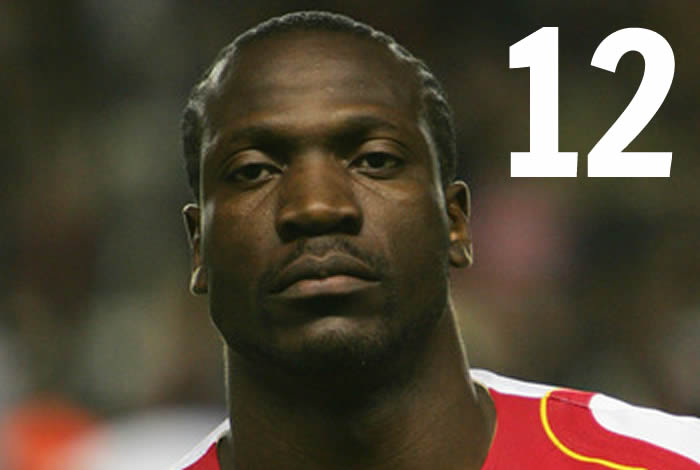 It’s very quiet this week, leading up to what is going to be a tough encounter against Stoke. As yet we don’t have any team news, but based on last weekend there are doubts over Gibbs, Monreal, Koscielny and Thomas Vermaelen remains sidelined.

Having him back would be a big boost going into the final games of the season. It feels like we’re skating on thin ice a bit and when your right back is forced to play three different defensive positions in one day then you know you’re not exactly flush.

I suppose the bonus is that we do have a squad that is quite versatile. Sagna can shuffle across from right back to left back to centre-half without any issue, while Mathieu Flamini can play in either full back position.

But those are stop-gap solutions so getting our full complement of centre-halves fit would be a very good thing. And maybe in the summer we can ensure that we have enough to deal with the odd injury or, indeed, the rigours of a season when from time to time it might be a good thing to rest a player now and again.

That said, in 2003-4, for example, the only reason Arsene Wenger rotated his centre-halves was because of injury/suspension. It was Sol Campbell and Kolo Toure for the majority of the season. Sol missed some games early for a couple of reasons, while Lauren’s suspension after Old Trafford saw Toure shunted out to right back and the Cyganator brought into the side.

I just live in fear of a Mertestrain or a Koscielknack.

Speaking of Flamini, he’s spoken about his job on the pitch and he says he’s happy to do the scrapping and the ‘dirty work’ for others to finish off. He says:

When I play with any of the boys in midfield I have to sit in front of the defence and do the dirty work but I enjoy doing it. My pleasure is to give them the possibility to attack and, when we lose the ball, to get it back as quickly as possible.

He makes the dirty work sound … well … dirty. I think his experience has been crucial this season and I’ll happily admit I was one of those who raised eyebrows at his signing back in the summer. More to do with the overall circumstances, in fairness, but he’s been so important. There’s no doubt we needed another player in there to share the burden with Arteta, and the two of them do more or less same job, but obviously they have different styles.

Arteta’s soundtrack would be beachy Flamenco, with some flourishes and Olés thrown in. Flamini’s a death metal version of a song he wrote himself which is called ‘I am going to eat your shins then poo on your stumps’.

I think when we’re forced to dig deep over the next two months – and make no mistake, that is what we’re going to have to do – having players with the experience of Flamini, Arteta, Mertesacker and Sagna is going to be absolutely crucial.

Lukas Podolski touches on the spirit within the camp, saying:

I’ve been at a few clubs and in different dressing rooms but I’ve never been in a team with such a strong spirit. You feel comfortable here – be it on the pitch or off it. You always look forward to being with the team and I think that helps us in matches.

It’s why people ought to ignore those who suggest there are tensions when you see Flamini and Ozil having a bit of a set-to on the pitch. It’s nothing. In fact, it’s healthy, as anyone who has watched or played football can tell you. I’d much rather the players felt enough to argue than amble around, getting overtaken by referees or hugging opposition players before, during and after games because they’re so desperate to be loved by anyone. Anyone at all.

Meanwhile, Laurent Koscielny gave an interview yesterday (you can read it in full here on the official site), but one of the side issues was him saying he’d like his own song. There are some suggestions in the comments on this Arseblog News piece here, but for sheer simplicity and effectiveness, it’s hard to look beyond this one:

Finally, for today – Arseblog turns 12. This day a decade and two years ago was the very first post from my sunny and warm (sob) attic in Spain. If you’d told me I’d still be doing this so many years later I’d have called you mad then wondered what the hell was wrong with my life.

I had a quick look to see if I could work out how many articles there’d been and while I think there might be a few missing here and there, the back-end (fnarr) tells me there have been 4834 published posts, which averages out to around 402 posts per year.

Obviously that has been bumped up in recent times with columnists and features (this doesn’t include the news site, by the way), but sometimes it’s hard to credit how big things have got over time. Thanks to all of you who read daily, or whenever you can, and for all your interactions, emails, comments and suggestions.

It’s not always been easy, given how things have been on the pitch in recent seasons, but it’s always been fun, and if an Arsenal fan can’t enjoy writing about Arsenal, then you might as well give up. Now, there’s Rice Krispie cakes and Jamribters for all. Tuck in.

Back tomorrow with an Arsecast and all the rest. Until then.

It’s snowing again and that has made me wistful

Monday musings on forward options and rotation + Lauren on Bellerin