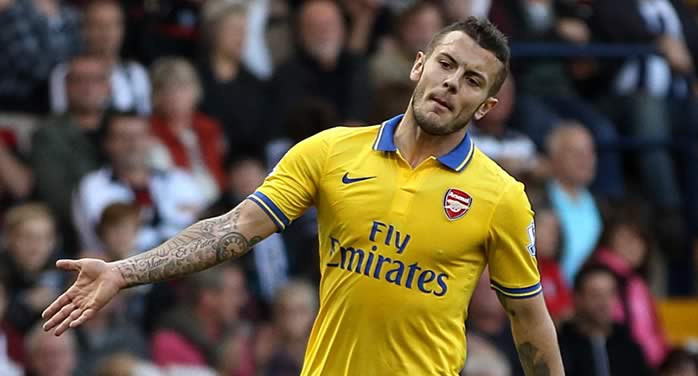 So the winning run came to an end, but thankfully we had enough in the tank for a point which I suspect will turn out to be a valuable one when it comes to the crunch.

As I spoke about yesterday, West Brom are no pushovers and although their record at home was a bit sketchy in the early part of the season, they look as if they’ve found their rhythm and will prove difficult opponents for most visitors.

There were a couple of changes from the team that beat Napoli, with Wilshere replacing Rosicky and Jenkinson in for Sagna, but no change of system with Ramsey and Jack deployed wide. It worked in midweek in the Champions League, not so much yesterday.

Ramsey had his first subdued performance of the season, perhaps troubled by a knee injury which saw him replaced in the second half, while Wilshere’s first half was one he’d want to forget in a hurry. He lost the ball constantly and while I thought a couple of decisions went against him he was careless and sloppy more than picked upon by the opposition or the referee.

We had Wojciech Szczesny to thank for keeping the scores level when he pulled off a quite brilliant save from a deflected shot, but conceded just before half-time to a smart Yacob header. It wouldn’t be unfair to question the marking when the cross came in either.

I thought we needed a half-time change. Rosicky for Wilshere would have been my choice but it’s rare that Wenger makes a change during the break. And when it did eventually come it was Ramsey who went off for Tomas. We might have been 2-0 down at that point too after Anelka beat the offside trap (looked off to me) but kindly curled his shot just wide of the far post.

However, after a dreadful first 45, Wilshere had a storming second and fired us level in the 63rd minute. Good build up play between Giroud and Rosicky saw the Czech lay it off to Wilshere whose first time shot took a small deflection on the way to the bottom corner. He then played one of the passes of the season to Giroud, dissecting the West Brom defence but good goalkeeping from Myhill prevented the shot on goal.

Then there were the penalty incidents. In one Wilshere took a shot before taking studs to ankle. It’s rare you see them given as penalties because the player’s had a go at goal, but anywhere else on the pitch that’s a late tackle and a free kick. As for the one when he got cleaned out from behind, yes the player got the ball fractionally before he leveled Wilshere but I can’t help feeling that if it had been up the other end that would have been a penalty.

I don’t really want to talk about the ref too much but I thought that was a strange decision. Since when can you come flying in from behind, get a nick on the ball and take a good chunk of the man without being penalised. Another one that had it been anywhere else on the pitch (see Olsson on Giroud) would surely have been an Arsenal free kick, so why not a penalty?

Anyway, ‘these things even themselves out over the season’, or something. In the end neither side could find another goal. Bendtner for Giroud was long-shot, but I don’t think a draw was anything other than a fair result. Afterwards, Arsene said:

Pleased? No because I want to win but if you ask me if it was a fair point over the 90 minutes I would say yes. It did require special resilience because they didn’t give us any space, they were well organised and we needed find something special to score.

After the high of Tuesday night it was always going to be difficult against a West Brom side who are rightly full of beans after beating Manchester United. They played well, we didn’t play as well as we have done in recent weeks, and it’s probably a testament to how well things have been going that a point away from home against a good team feels a bit disappointing.

I think what we saw yesterday was a small group of players who have done brilliantly finally succumb to a bit of fatigue in the face of fresher opposition, plus the lack of real options on the bench made it difficult for us to really go for it. But we showed good character to get back into it having gone behind in a game for the first time this season.

Huge credit to Jack Wilshere for putting that first half behind him and becoming the driving force in the second, particularly when we lost the threat of Ramsey. It would be good to get one or two of the wide players back after the Interlull though. I don’t think we get the best of the players when they’re deployed in unfamiliar positions. Ramsey in particular has been the best central midfielder in the league this season, so while I understand why he played there yesterday, it’s not something you want to see week in, week out.

Finally, a word for Wojciech Szczesny. The first half save was outstanding but since the Villa game, when he had that mad walkabout moment, he’s been really, really good. I know people just wait for a goalkeeper to do one thing wrong before launching the missiles of hyper-criticism at him, but he’s played a big part in how well things have gone and deserves some props for it in my view.

So, a point. It’s not what we wanted but it’s not a bad one by any means. Now we go into the Interlull hoping to get some of the walking wounded back and that nobody gets maimed in the next couple of weeks, then it’s into an extremely busy and testing spell.

Oh, and we’re still top of the league.