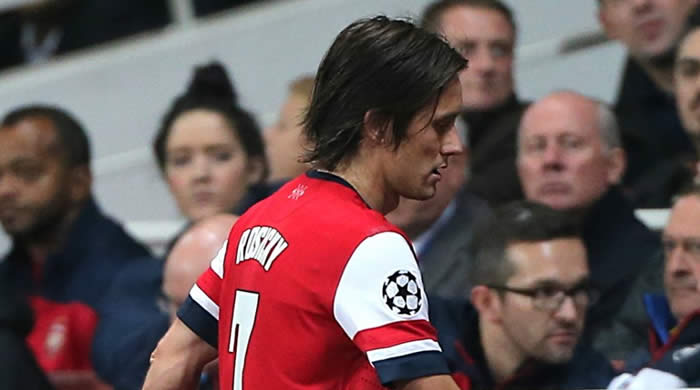 So, it’s into another Interlull. In times past these have more contentious affairs as we’ve had more difficult results and haven’t been sitting at the top of the table.

Now we’re in a lovely garden of peace and tranquility (mostly) where little fluffy bunnies skippity-hop about with no fear of being booted over the wall by disgruntled folk who complained that Mertesacker was just too slow for the Premier League.

It means there’s less to discuss which means that the Interlull will probably go more slowly than other Interlulls but hey, top of the league and it sure beats the alternative.

There’s some good news and bad news (depending on what you consider bad news) this morning regarding a couple of our players. Firstly, Tomas Rosicky won’t be going away with the Czech Republic for their games. They’re very unlikely to qualify for next year’s World Cup and it’s good to see common sense prevail here.

He’s only just back from injury and didn’t start against West Brom because he wasn’t 100% fit, so the idea of him going away with his national side and getting knackered again would have been difficult to take. Remember, it was during the last Interlull he picked up the knock that kept him out for 6 games, so another one would have been really very annoying indeed.

And at this point, you have to wonder if Tomas should consider his future at international level. He’s 33 now, the Czech Republic are unlikely to qualify for the World Cup in 2014 and by the time the European Championships take place in 2016 he’s surely going to be beyond the age where he’ll be involved.

Arsenal have shown a lot of faith in him, and there’s even talk of a new deal which would probably extend his stay by another season, so perhaps it’s time to repay that by ensuring he’s at his best for us as often as possible. He talks about being a couple of years younger than he actually is due to his injuries – his ‘football age’ – but the reality is that even with little extra in the tank, he’s heading into the twilight of his career and if he could focus on Arsenal for that, I think that’d be just swell.

Meanwhile, having been all set to sit around London Colney for a quiet 10 days or so, Kieran Gibbs has been called up to the England squad after an injury to Cashley. In one way it’s good that his performances at left back this season have gained some recognition, on the other it’s another player at risk from the Interlull.

That said, it’s inevitable that when somebody plays as consistently as Gibbs has that he’ll be called up, and he has been one of the unsung heroes so far this season. He’s been eye-catching at times, some of his forward runs into the box remind you that he started life as an attacking player, but it’s the improvement in his defensive work that’s so impressive.

His positioning and reading of the game are much better, he’s more alert to danger, and he’s better at defending the space in behind which is somewhere he found himself exploited a bit too often. But that all comes with playing on a regular basis. The way he’s worked on his game, and cut out some of the flaws is something that Carl Jenkinson, for example, should pay close attention to.

I thought he was a bit suspect at right back on Sunday, and it’s not just down to being raw or inexperienced. He’s still got a lot to learn, obviously, but some of what he failed to do was just the basic stuff you expect from a full back at any level. Hopefully, on the training ground and in the video room, these incidents are being pointed out to him so he can learn from them, but in Gibbs he’s got a great example to follow.

And finally, Jack Wilshere admitted that he made a mistake with the whole cigarette thing and that he won’t be doing it again. Hopefully this can now draw a line under this entire, tedious thing and we can get back to discussing him for what he does on the pitch rather than off.

Anyway, here’s a piece I wrote for ESPN about how, perhaps, his lack of form is a little overstated and how a bit of patience is required. Comes with fantastic bonus comment from one of the readers:

Flamini got his first yellow of the SEASON in the game

Erm, not quite, but still. Right, that’s about that for this morning. Keep an eye out later on for a chance to win a Mesut Ozil print from our good pal Dan Leydon, and remember there’s a chance to win a print from @threenil in this week’s Arsecast (which also features an interview with the author of the Dennis Bergkamp book).