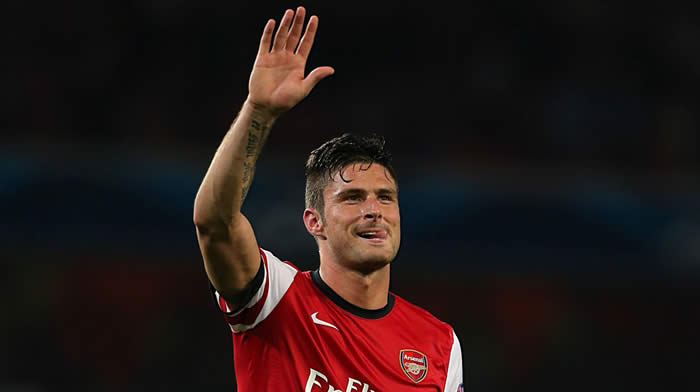 After a weekend in which the focus has been on the beautiful goals and the goalscorers, it’s interesting to look at Olivier Giroud’s role in how the team is playing this season.

I’ve spoken before about how much his overall game has improved. As the focal point to our attack, he’s come on considerably from last season, particularly in the air where he now wins more than he did and doesn’t sit around if he gets clumped by a defender. He’ll just get on with it and win the next ball.

His lay-offs are better, his passing is better, and his relationships with his teammates are such that there’s now an instinctual understanding between them. You have to only look at the Wilshere goal to see that. Jack knew that he could, at the very least, try to make his way through the Norwich defence by trading flicks with the Frenchman. That it came off was a wondrous thing but it shows what Giroud’s game is about: unlike some strikers whose first thought in an around the box is how they can find space for a shot, he’ll try and make something for someone else.

It’s something that Philippe Auclair touched on in Friday’s Arsecast. Giroud was one of the subjects we touched on and he said:

He’s not just a big guy who is good at holding up the ball with his back to goal. He’s somebody who loves to play with ‘first intention’ as we say in French. Somebody who can flick the ball around the corner, is always looking for a quick solution when the tempo of game has to be accelerated. He’s always looking to create something, a creator in the box. It’s something that Arsenal have been lacking for a while.

Obviously it’s something that doesn’t always come off, but when it does it’s so deft that it very often creates chances from which we should score. There was a game earlier this season when he laid a couple on a plate for a misfiring Theo Walcott, and you think back to the goal Podolski scored last season in the Champions League. A first time dink over the top made to look even more special by the quality of the finish.

He is now performing, and producing, on a very consistent basis, and after high profile pursuits of strikers like Higuain and Suarez, Giroud has responded brilliantly. The inability to close one of those deals meant our reliance on him was strong. In which case it was down to him to take that chance and show that he’s the man to lead our attack.

In the summer there was a feeling we needed a world class striker to push on and improve. Instead, we’ve added a midfielder who has gone some way to doing that but Giroud’s contribution ought not to be overlooked. You now have to question if our striking need is as pressing. I think we need some back-up but I don’t believe any more that we have to have that expensive forward everyone wanted a few short months ago.

What more can you ask of a player than to take his chance and prove his quality? At which point, do you reward that by making him important and an integral part of the team, or simply go out and buy somebody anyway? There’s always the need for good players, and every team should look at improving where possible, but you also have to take into account what’s happening and what you’re seeing with your own eyes. When players develop because they’re playing regularly and responding to the responsibility placed on them, you keep playing them.

The ‘world class’ tag is one that’s thrown around too easily, and it’s a fairly arbitrary one anyway, but is there a striker in better form in the Premier League so far this season? He’s never going to be the quickest, but he’s up there with the strongest, he’s improved in front of goal (although can still do more, I think) and the way he allows the players behind him to just get on and play is really important to what we’re doing this season.

To be fair, I think his job is made a little easier by having players like Ozil, Ramsey, Wilshere, Rosicky and Cazorla to act as a focal point for, but that’s not to dismiss his quality at all. The Wilshere goal on Saturday gets all the replays, while Ozil’s first is somewhat overlooked because of the other three, but I loved the precision of that cross. The height, weight and timing of the ball made it relatively simple for a man who has never, ever scored a headed goal in his career before.

I was very much an advocate of a striker signing this summer, especially as Giroud was our only real option. That situation has been slightly lessened by the return of a seemingly motivated Bendtner who, despite all the other nonsense that has surrounded him, has never been as poor a player as people say. And now I think our need is about finding somebody who can provide genuine, effective cover.

Such is football, that is the way things fluctuate. Situations, and opinions, change. And it’s one of those very Arsenal things, seeing a player come in and develop from something good to something better. And Giroud looks much, much better. He’s on target to improve on last season’s 17 goals (a respectable figure all the same), and 10 assists. Maybe he still has to prove himself to some people, but I like what I’ve seen this season and I think, if we can allow him the rest/recovery time he needs, then there’s plenty more to come.

Elsewhere, Mathieu Flamini is a doubt for tomorrow’s game against Dortmund due to concussion; here’s a By the numbers look at the Norwich game, and this is just one of my favourite things ever. The audio from inside the stadium of Jack Wilshere’s goal. It starts just as picks up the ball in our half, and just after the one minute mark you can hear the audible gasp from crowd as they see the replay on the big screen.

Right then, back tomorrow with a preview of the Dortmund game. In the meantime, have a Handsome French Monday.

ps – I know it’s still a bit away, but if anyone has a couple of spares for the Liverpool game, can they let me know? Thanks.