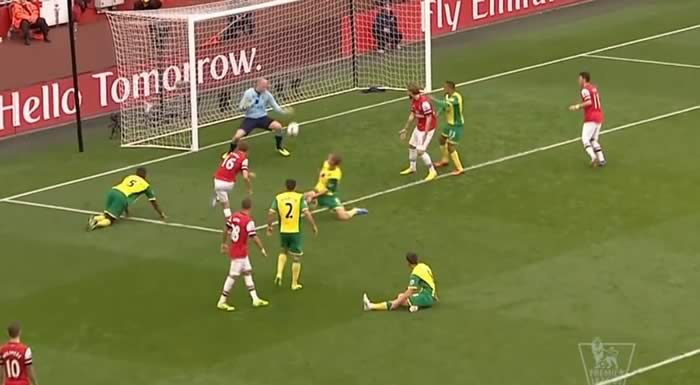 And Wilshere picks it up deep in his own half, plays it out wide, he keeps running forward. Cazorla has it, he gets to the edge of their box. Cazorla to Wilshere, he flicks it to Giroud, he flicks it back. Wilshere doinks it back to Giroud with his heel … the crowd are on their feet … they can sense something special is going to happen. Wilshere keeps running, Giroud, with a left foot like a sand wedge, chips it behind the defence. Wilshere is still running, he’s beaten the offside trap like a mangy cur, the ball falls perfectly to him on his right foot. He closes his eyes because that’s just how good he is … and finishes past the keeper who can’t even move. Yaaaaaaaaaaaaaaahhhhhhhh, Goooooooaaaaaaaaaallll! The crowd are going wild. 1-0 Arsenal!

I mean, really. I don’t think I’ve ever really seen anything like that. It was a once in a lifetime series of clips, chips and dinks built around devastatingly effective movement. If it was a cartoon there’d have been one Norwich defender turned literally inside out, his skeleton reeling as Wilshere confuses his insides out of him.

It was special. As was a lot of what we saw yesterday from Arsenal. The loss of Mathieu Flamini affected the team considerably. We lost our momentum for the rest of the first half and for a good chunk of the second. Norwich came out to play, caused us some problems and were beginning to find their range when we scored our second. And it was a goal that showed quite how different things are this season.

Last year we’d have been hanging on a bit, confident enough of scrapping out the 1-0, but these days, despite being under pressure, we hit them with a sucker punch of genuine quality. Koscielny read a through ball and intercepted on the edge of our box, Cazorla drove forward with it, played it to Giroud on the corner of their box and he spotted the lung-bursting run from Mesut Ozil. Spotting a run is one thing, most players with eyes can do that, but the quality of the pass which allowed the German to head home on the run was superb. The Frenchman might not have scored yesterday, but it was another fine display and with two assists to his name he should be very happy with his day’s work.

A rare miscue from Mertesacker created the chance for Norwich to pull one back, but again we showed what a difference it is having players of real quality, and ones in real form. Aaron Ramsey wasn’t content with a one goal lead. He’d been peppering shots at Ruddy in the minutes before he scored and the Norwich keeper had a really good game (the save from Giroud in the first half was outstanding).

But watch Ramsey beseeching Wilshere to give him the ball just inside the area. Such is his confidence in his own ability he thinks he can score from anywhere. He feinted to shoot, leaving one defender twisted on his arse and a second with nowhere to go, turned inside another sliding tackle, and buried it despite another defender sliding in to try and prevent the shot. This time the keeper had no chance.

Arsenal’s fourth involved a slightly misplaced pass from Ozil to Bendtner who might well have been tempted to go it alone and try a shot. Instead he laid it off to Rosicky, Ramsey called for it at the back post, Rosicky delivered, Ramsey cushioned it back to Ozil who had the simple task of side-footing it home for his second of the game. Just outstanding team football. The awareness of the movement, and the players confidence in each other to be able to make the right pass is just glorious to watch.

It comes from spending on Ozil, the sensational improvement by Ramsey, having players like Rosicky as options from the bench, and from a group of players that look like they’ve clicked. The belief is palpable, and there’s so much to be said for having genuine quality in the team. That even when you’re going through a difficult period you’ve got Cazorla giving it Giroud who finds the £42.5m signing making the kind of run that destroys a team. There’s nothing precious about it, it’s all about desire to make something happen and having the ability to finish it off when a chance presents itself.

Afterwards, Arsene reflected on Wilshere’s goal, calling it one of the best he’s ever seen, and spoke about the quality of the overall performance:

We won 4-1 and their keeper had a good game. But I think as well that Norwich played well, so it is strange. They made it difficult for us. We had a difficult period between 30 and 60 minutes where we struggled a little bit to keep our game going. I would come out of the game thinking Norwich is a good team.

And that’s a fair point, I think. They did look decent when we went through that post-Flaminitic slump, but when you look at the way we, essentially, pulverised them in the final part of the game it’s so encouraging. Ruddy had a really great game, making save after save, from Ramsey, and from a reinvigorated looking Bendnter (who appeared sharp and quick), but it was the moments of brilliance and magic that won it for us.

The Wilshere goal was incredible. There’s nothing complicated about Ozil running half the length of the pitch to try and make something happen but too often that kind of thing is overlooked. How many times have you seen a player run past a marker and thought ‘Oh-oh’ before we’re punished for it? This was that, but in glorious, hard working, reverse. Ramsey’s third was as good as anything you’ve ever seen from the litany of great players in our history, and the fourth was beautiful in its simplicity and effectiveness.

You don’t want to go into individual performances after a day like this because it was all about the team. 11 men, plus subs, making something special happen, and that’s what we got yesterday. Maybe some still aren’t taking us serious as title contenders, which is fine by me. I think there’s still something to prove against the better opposition, but you can be sure they’ll be watching us and realising that they’re facing a different Arsenal this season.

So are we. And it’s a great big bucket of fun right now.

Finally for today, love this crowd picture from the TV coverage yesterday. The difference one second makes (and we see you, ArsenalFan TV!).