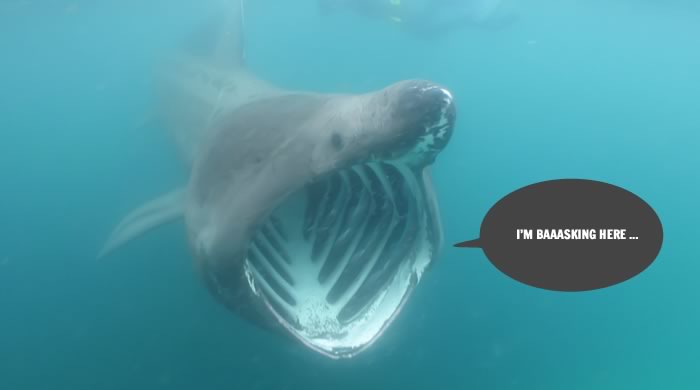 You know what the coolest kind of shark is? It’s the basking shark. You know why? It’s because it basks.

Unlike other sharks who scour the waters looking for trouble like corner boys, the basking shark simply basks around the place, basking. There’s a lot to be said for such an approach and at the moment being an Arsenal fan is a lot like being a basking shark.

Ok, so we all like to feed on things tastier than plankton and small invertebrates, but we’re just cruising around with our mouths open enjoying the situation we find ourselves in. It’s been a long time since we’ve been able to do any basking at all. Too often we’ve been swallowed up by the depths, swimming madly to avoid the bigger fish, or prehistoric looking coelacanths who are basically the fish you would get if John Terry and Luis Suarez had a baby together.

“No, of course I didn’t abuse that puffer fish for his colour and or lifestyle. No, I said he was a Gillito, it’s a term of endearment where I’m from. You wouldn’t understand, I was speaking Mariana Trench fish, it’s a dialect that few people understand.”

So it’s nice to be clear of those kinds of worries right now and be where we are. Is it unexpected? Somewhat. Let’s be honest, we’ve just won 10 games in a row. I can’t remember the last time that happened. This is why we have websites which list that information and the last time it happened was in the 2007-8 season when we won 12 on the trot in all competitions. It’s a leap forward, because last season the most we managed was 5, the season before that 6.

It’s fun and although there’s a part of me that wants to urge caution and to check expectation, what’s the point? We’re all old enough and experienced enough (I’m assuming) to know that it’s ups and downs, swings and roundabouts. It’s the circle of life. We’re never as good as we like to think and never as bad as we fear. Or something.

So as long as it lasts I’m just going to make like a shark. And bask. If we have to deal with a coelacanthariffic situation at some point in the future that’s a bridge we can cross when we come to it.

In the wake of Tuesday’s utter destruction of Napoli (set in greater focus by the struggles of the Manchester clubs this week), Mikel Arteta has been the most vocal of the Arsenal players when it comes to Mesut Ozil. Olivier Giroud bigged him up, and the man himself talked about his first goal, but Arteta touched on his signing in general, saying:

I think it was a great message from the club because everybody was expecting a top, top player – probably a striker more than a No 10 – but at the end we got an amazing player. I think he has lifted not only us but you can see the people are excited again to come and watch us and it makes a big difference.

It’s almost as if he was some kind of magic button. It’s pushed and things change. The dull grey landscape is transformed into vibrant colour. Flowers spring from the earth, young saplings become mighty oaks. It’s kind of amazing. Which isn’t to take anything away from the other players who have played such a huge part in the run we’re on, but that little sprinkling of something special changes the entire landscape.

I loved Ozil’s goal on Tuesday night. The technique, the control, the swerve (and I also loved Rosicky’s run which took two defenders away from the middle of their area and created space for it), but I think what I liked most is that it was the kind of goal we used to score. It was the kind of goal that Henry, Pires or Bergkamp might score. Anything that harks back to those days and that kind of quality is sure to send a tingle down your spine.

But while the limelight is very much on the German, the influence of Mathieu Flamini is also worth noting. It was easy to be cynical about his signing. It seemed to sum up our transfer policy at the time. Opportunistic, unadventurous, perhaps a bit easy and, of course, as inexpensive as you can get.

However, what he’s brought to the team is just as important in my opinion. Ozil brings beauty and quality, skill and finesse; but Flamini adds a platform of combative, uncompromising nastiness that allows that to flourish. He has had an influence on those around him. He will stop the opponent if at all possible. Sometimes fairly, sometimes not. He’ll pick up a lot of cards this season, and will miss some games through suspension, but it’s too easily forgotten how the best Arsenal teams had that kind of edge.

The silkiest players also had a steel to them that Flamini was around to witness and learn from in his first spell. Even the strikers, the wonderful, technical Bergkamp and the free-scoring Henry, would get their foot in and make life as difficult as possible for the opposition.

The transformation, dare I say progression, in this area over the last couple of seasons has been really interesting. Out went Song, a guy more concerned with hugging the opposition than doing his defensive duty. In came Arteta to that position whose experience meant he’d make the foul when necessary, providing that shield for his defence. And now we’ve got Flamini in there who adds more defensive nous but a measure of nastiness too.

Like it, or not, every team needs to have an edge. It’s a physical game, you can get bullied if you allow it, and this now looks like an Arsenal side that won’t. Will other players take their cue from Flamini? They’ll have to, or he’ll point and shout at them. Adding that kind of character to the side has given us something different, so all credit to the manager for spotting that and the player’s desire to do something in his second spell at the club.

Finally for today, we have the winners of our competition to win the Dennis Bergkamp book – Stillness and Speed. The winners of a book each are: Nimalan Christopher, Chike Echebiri, Johannes Lundetag, Marie Coggin and Glenn Perry. Congrats to you.

The winner of the star prize, a signed copy of the book and a signed Arsenal football is Richard Reid. I’ll be in touch with all of you today to get your details so we can get the prizes sent out.

And on tomorrow’s Arsecast, I’ll be talking to the author of the book, David Winner, so tune in for that.