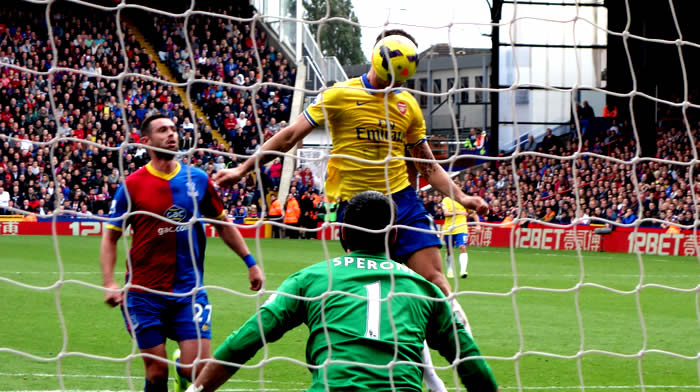 Another day, another three points, but it was much harder work than many had anticipated. I’m sure I’m not alone in feeling a little uneasy when the pre-game narrative isn’t just about how we’re going to win but how how many we’ll score in the process.

Under ideal conditions you could look at the two teams and fairly suggest an Arsenal victory but as we know things happen in 90 minutes that have a big impact on games of football. For example, losing Mathieu Flamini in the 7th minute wasn’t ideal. His replacement, Serge Gnabry, did ok, but his departure robbed us of a little intensity that might have made the first half less timid and Arsenal more effective.

It was good for us that Palace had Marouane Chamakh up front. A footballer might actually have buried that glorious chance he had late in the half; instead the Moroccan jumped under the ball with just Szczesny to beat. It was a massive let-off and against better quality opposition we’d have been chasing the game in the second half.

As it turned out, Palace gave us an opening with a ridiculous penalty. Quite what their bloke thought he was doing, sliding it at full speed on Gnabry, is anybody’s guess, but I’m very grateful for his stupidity. Mikel Arteta stepped up and put the penalty right where the keeper couldn’t get it to make it 1-0.

Chamakh and Arteta then clashed as Palace broke after an Arsenal corner. At full speed it looked accidental. Replays showed Chamakh’s touch pushed the ball to the right, he ran to the left into Arteta, legs tangled 45 yards from goal and Chris Foy issued a red card to the Spaniard. It was a harsh decision, a clever bit of chicanery from Chamakh (which is about all he’s good for), and all of a sudden we’re down to 10 men.

Not ideal. Circumstances change. Now the narrative is not how many will Arsenal win by, but ‘Can they hang on?’

That we did was down to some excellent defending, particularly from Bacary Sagna. In situations like this, when backs are to the wall a bit, I don’t think there’s a better defender anywhere. If there’s a header to be won, he’ll win it. He prevents danger developing and he was absolutely outstanding yesterday. Contract. Contract. Contract. Come on.

However, major plaudits will also go to Wojciech Szczesny who made one of the best saves of the season so far to prevent Jedniak equalising. The Pole punched a corner away, it fell to the Palace man whose volley was certainly heading for the net, but with Giroud obscuring his view, Szczesny got a massive hand on it to tip it over the bar. It was a game saver and he’s been doing that with more regularity since his return to the side.

I think it was QPR last season when late on he brilliantly stopped Remy getting a goal which would have, in the end, have seen us finish outside the top four. For me his form is overlooked and under-appreciated. Not that this is necessarily a bad thing, but too often we’ve bemoaned the lack of a keeper who could make a difference and right now we’ve got one.

Wilshere and Monreal came on to shore things up and the Spaniard in particular looked determined to make the game safe, almost finding his way through on a couple of dribbly occasions. In the end though, two of our best players this season ensured we took the points. Giroud held the ball up in midfield, and fed Ramsey who went on a run towards goal. When you see the replays you can almost spot the moment Giroud realises there’s something happening. He charged into the area, Ramsey’s delicious chip was perfect, the Frenchman timed his leap perfectly – like an anti-Chamakh – to nod home our second.

It was not a game of brilliance but it was a game of efficiency and patience. For us it was about being patient and not making a mistake and we did that well. The pitch was a bit slow, maybe we were not the sharpest as well and the two together made us create less chances than we are used to but we were serious and determined.

It’s often said that a team with genuine title ambitions has to be able to win games when they don’t play particularly well, and if so it augurs well for us because this wasn’t a sterling Arsenal performance. It seems that some of the attacking verve and zip to our game has disappeared in the last few games, and without pointing the finger of blame in any way, I wonder if the return of Santi Cazorla has contributed to that.

I shouldn’t have to qualify this by saying how much I love him and what a brilliant player he is, but this is the Internet so I will. However, since his return from injury he’s struggled to find his best form. He’s not somebody who spends a lot of time injured so maybe he’s just taking some time to feel his best again, but he’s been uncharacteristically poor on the ball, giving it away when he rarely, if ever, did beforehand.

It’s not to say he’s the only reason things haven’t clicked, other players have had their difficulties too, but you just get the sense that if he found his rhythm again it would have a big impact on how effective we are in the final third. Anyway, I’m sure it will come, he’s too good for it not to, but in the meantime we’ve got to take some real heart from the fact we’re still capable of scrapping out results when we need to.

The downside is the injury to Flamini and already we’re hearing about the ubiquitous three weeks. If it’s a muscle strain that really makes him a doubt for the games against the Mugsmashers, Dortmund and United, and that would be a blow. Fingers crossed. Mikel Arteta’s one game ban will see him miss the midweek Capital One Cup game against Chelsea – a fixture he was unlikely to play in anyway, so it could have been worse.

Overall, it was a day when we weren’t at our best, nor at the level many predicted, but we still did what was required. Three points. Top of the league.

Not bad at all.