Tactics column: Mesut Özil – a new breed of No.10

Back in November last year, Arsenal were reportedly ready to smash their transfer record on another German midfielder with an umlaut: Mario Götze. It never happened, but it prompted Guardian journalist, Barney Ronay, to tweet: “what arsenal desperately need is another small tricky midfielder.” My reply was that that was most people fail to understand; that “Arsenal needs these (small) tricky midfielders to be better at what they’re good at.” Ronay then summed it up nicely: “interesting thought. One very good trick, not just one trick.”

We’ve had some who’ve harboured the same misgivings – although drummed out by the excitement over £42million price-tag – following the signing of Mesut Özil.

Özil, though, isn’t short. He’s fairly slight although he has bulked up considerably and he is tricky. He fits in perfectly to the way Arsene Wenger wants to play – quick, one-touch football based around lots of movement off the ball. He should improve Arsenal immensely; arguably more than a physical midfielder might, because it strengthens their USP. Think about it this way: if playing against Arsenal was difficult because they pass and move so well, imagine how harder it’d be with another trickier midfielder in the line-up (that’s better than what they have already).

A midfield enforcer might allow Arsenal to compete better in certain areas that they may be lacking in – but it’d be a bit like sticking a square peg in a team of round holes, and would the improvement enough to make them outstanding? Some might point to the impact of Javi Martinez has made to a Bayern Munich team that was previously seen as a little bit flaccid at the back, but it’s not as if Arsenal don’t realise benefit of such a player, with both Arsene Wenger and Steve Bould proclaiming how Aaron Ramsey has grown in “stature” and is now a “physical presence.” The stats bear it out: last season, Ramsey attempted a tackle every 30 minutes, at an exceptional success rate of 89%. This season, he’s already the league’s best midfield tackler, winning 12/13 of his duels (a success rate of 92%).

Because Arsenal are a side with so many of these tricky midfielders, the arrival of Mesut Özil poses the nice dilemma of how to fit them all into the starting line-up. Feasibly, Arsenal could deploy a midfield five who have all started in the number 10 position in the last two years. Jack Wilshere and Ramsey, though, have started to make themselves comfortable in deeper positions. Then there’s the possibility of Arsenal fielding a midfield trio of Santi Cazorla, Tomas Rosicky and Mesut Özil (if, God forbid, one of Arsenal’s two frontline strikers become injured). Indeed, those three also represent the playmaker in its different guises: Cazorla as the wide playmaker, Rosicky as the all-rounder and Özil as the creative playmaker. The different interpretations should make it easier to slot them all into a line-up.

To focus on Özil, though: he is a peculiar-type of playmaker. His chance creation statistics are extraordinary, delivering at least 3 key passes per game from open play. But his de facto move is not necessarily to position himself in central areas, as you would stereotypically expect a playmaker, but to drift into wide spaces. The effectiveness of this move facilitated by the quality of movements around him – at Real Madrid he had Cristiano Ronaldo and Angel Di Maria both looking to cut inside and shoot, and Arsenal will need to try and look to do the same – yet it’s still unique to see somebody pick the ball out wide as often as Özil does.

In essence, he’s doing just what all playmakers must be capable of doing nowadays: roam laterally. If the space in the centre is blocked – and often it is the most congested part of the pitch – then typically the most space will be on the flanks. Similarly, wingers are cramped for room so they’re increasingly forced to come inside – that’s why there’s a proliferation of inverted wingers these days. Therefore what Özil does to get space, is to make use of his team-mates by doubling up to create an overload. He doesn’t just move sideways though; he moves backwards and forwards, never sticking to one position, making it hard to mark.

It also makes it hard to underpin what type of player Özil really is. He’s a number 10 for sure, but what kind? Because he drifts wide so frequently, he can almost be a winger. But then again, he can’t be as he always starts in the middle of the pitch. When he moves up the pitch, he at times, becomes a striker. And when he moves backwards to pick up the ball, he’s a third central midfielder. He’s also not really a dictator of play, more an instigator therefore you can’t really call him a playmaker.

Indeed, the compact nature and defending in front of the area, has effectively ushered the natural playmaker into a stealth position. Playmakers now come in a number of forms and have essentially become players of “between-the-lines.” “The word enganche (playmaker) is dangerous,” says Atletico Madrid manager Diego Simeone. “But, I like enganche, although with some variations. More like the playing style of Zidane, call it a prototype of enganche? That evolved into the enganche roles today of Kaká, Totti, Pirlo, Ronaldinho and Robinho. I believe enganche today must come from another sector, there must be wider variety of options.” Indeed on Kaka, he was thought to be by AC Milan owner Silvio Berlusconi as an attacking midfielder, so he decided to splash out on Ronaldinho from Barcelona to play as a forward – Carlo Ancelotti, however, was adamant that Kaka was already a striker. 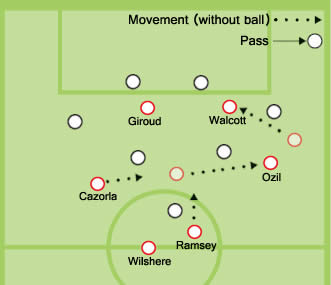 The best term to describe Özil might be to use a redundant term, as an inside forward. Because he frequently looks to exploit the space in the corridor between the full-backs and the central players, be that moving higher up the pitch or sideways. His movement is so clever that it’d be interesting how it will affect Arsenal. Santi Cazorla loves to move inside from the left, also creating overloads, which should encourage further combination play.

His predilection to moving wide should make a potential partnership with Theo Walcott interesting. Would it encourage the England man to play further up the field more, almost as a 4-4-2 or make his runs behind the full-back more effective with Özil combining? Giroud too, should enjoy Özil as he plays closer to the striker than Rosicky, offering more of a goal threat. In short, Mesut Özil should be perfect for Arsenal.