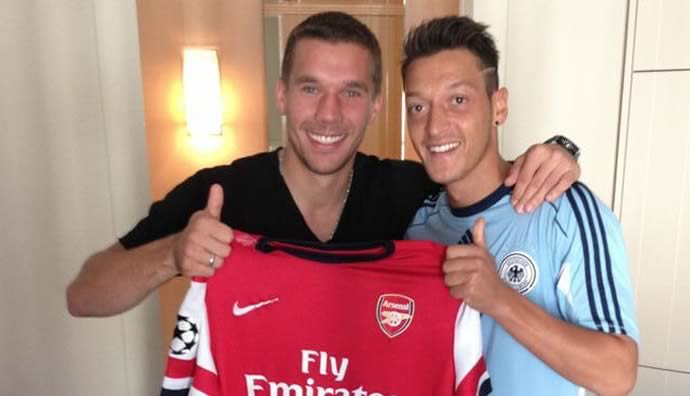 the dust has settled a bit on the transfer window and the final day which saw us sign Mesut Özil from Real Madrid. It still sounds a bit weird to discuss him as an Arsenal player, but an Arsenal player he is. The papers today give some background to the deal (actual background, not made up nonsense by spoofers and waynkers) – about how Ivan Gazidis flew to Spain to sort things out while Daniel Levy was watching his Bale-less Sp*rs take a beating in our stadium, but as amusing as all that is, the important thing is we got it done.

And while there’s background stuff and brokering that’s important, it seems it was a lengthy phone conversation between Arsene Wenger and Özil that sealed the deal. Having more or less been dumped by the club at which he felt comfortable and loved by his teammates and fans, he wanted assurances that he’d be important to whoever he joined – and Wenger was able to give him those.

Speaking about the move, he said:

I’m really looking forward to it because I have the complete faith of the manager. I talked to him at length over the phone and he told me his ideas and he trusts me – and I need that as a player. I realised I would not get the full trust of the manager [at Madrid]. I am a player who needs to feel that – and I felt that with Arsenal and that’s the reason why I’m signing for them.

I don’t imagine it was especially difficult for Arsene to convince him how important he’d be to us. He’s a player who clearly knows his own ability and will be aware what he can bring to this particular Arsenal side. I think the underlying issue here is that players as good as Özil don’t just want to be reassured that they’re going to play, but that the players and the team they’re going to play with are capable of competing at the highest level.

It goes back to something I said yesterday, that this signing can’t be a one-off. We’ve changed the way we do things in the transfer market and we now have to continue to operate at this level. That’s not to say every transfer should be a record breaker, but the calibre of the player should be reflected in the deals we do and are financially capable of doing.

The reaction to his arrival from our players has been telling. Walcott, Cazorla, Wilshere all waxing lyrical. Our German internationals know him as well as anyone and obviously know what he can bring to the team, while even former teammate Sergio Ramos said:

I am very unhappy after the exit of Ozil. If it was up to me then he would never have left. But it was the choice of the club. But I am totally convinced he will be a star at Arsenal. I know Santi Cazorla well and together they will be an enormous spectacle.

It is a mouthwatering prospect, no doubt about it, and over on Arseblog News, Sul offers some analysis of the signing and how the team might change when he arrives. We just have the small matter of the Interlull to get through, then he can start his career in England with consecutive games against Sunderland and then Stoke. I’m sure he’ll be clued-in by Per and the Pod, but that’s some start.

Meanwhile, the goalkeeper we signed has flown under the radar a bit and Emiliano Viviano has spoke about the ‘positive fight’ he’s looking forward with Szczesny and Fabianski. There’s a full interview with him on the official site and despite his English not being perfect he gives it a really good go. When you consider we’ve had guys play at the club for years and years and still insist on doing their interviews via a translator, you have to say fair play to the bloke.

It’s difficult to offer any kind of opinion about him because I really haven’t seen him play, but if he’s there for cover and competition then he ticks many of the right boxes. He seems happy and enthusiastic to be here, and if his arrival keeps Wojciech Szczesny fully focused throughout the season then it will be almost worth it in itself. The Pole has been excellent this season and he continues that kind of form then it can only be a good thing for us.

The lack of a striker on deadline day was/is an issue for some, and I understand that. I’d certainly feel a lot more confident about the season if our options in that position had been improved, and it was interesting to hear Mourinho say they wouldn’t sell us Ba because with Özil we’re title contenders. From what I gather the Ba deal was very, very close until they pulled it at the last minute, but when you lie down with dogs you can’t complain when you get fleas.

It was always going to be a dangerous game dealing with him, and them, on deadline day when any change to the potential deal would probably prove fatal to our hopes of signing a striker. Ultimately, what it meant is that Arsenal pulled the deal which would have seen Nicklas Bendtner go to Crystal Palace. Yesterday, TGSTEL released a statement expressing his disappointment that he hadn’t been allowed to leave but insisted that if called upon he’d give his all for Arsenal.

I don’t know what else he could say really. If he’d really wanted to go somewhere else and play football this summer he could have done. It’s up to you to decide if he should have taken a massive pay cut to do it, but there you go. He’s injured for a while anyway, and is probably a long way from full fitness, but on the off-chance that he’s needed, I think we have to take his statement at face value.

It strikes me that it’s all set up for a January move. We may have to stick with each other till then for the sake of expediency, but if Arsenal can find the right candidate when the mid-season window opens, I suspect moving Bendtner along will be part of that. The issue is that he’d be available on a lucrative Bosman if he sticks it out until summer, but that shouldn’t change what Arsenal need to do.

In other news, this is an entertaining read about what went down at the Emirates on deadline day, some of the pictures are fantastic and the man with the spud had a good idea but when I was watching on TV I was wondering why he was holding a lemon. Must have been the lights.

And finally, with our squad settled and ‘complete’, check out our 2013-14 Arsenal Player Profiles on Arseblog News.