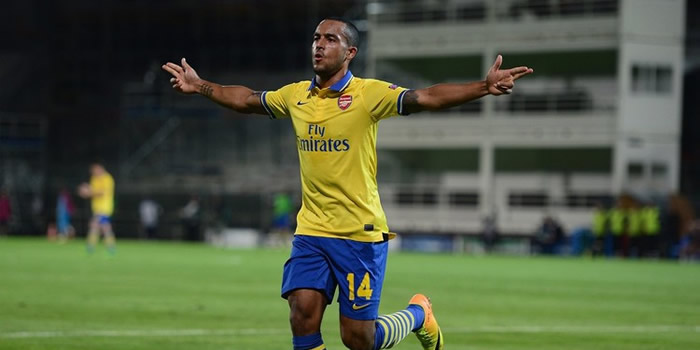 Arsenal started brightly enough, passing it around well in midfield, but it was fairly end to end stuff, with the Arshavin-sized Valbuena (height, not girth), featuring prominently. He’s a player we’ve been linked with, and while we’re pretty well stocked for technical, attacking midfielders, you can see why people might think he’d fit in. A couple of early chances – one a header for Gignac (I think), which Szczesny had to easily save, and then another from distance when Valbuena himself tried to curl one – and we were on the back foot and we were struggling to get time on the ball.

Much had been talked about Marseille’s high line before the game, and the thought was that we’d be able to exploit that with Theo’s pace. A few early chances for Walcott seemed to bode well for that theory, but a difficult headed chance from the edge of the box saw too many players between him and the goal, and then he couldn’t get enough power in the shot from Ramsey’s long ball.

Marseille, perhaps spurred on by the lunatic on the PA system, began to have more of the possession. It was scrappy though, and Arsenal – for the most part – coped adequately without ever really feeling in danger. Payet almost had a shot from the edge of the box that Ramsey got to, before Andre Ayew (who I bizarrely called “Jayew” on the liveblog, apologies for that), had a free header that he only just put wide. It was the closest they came in the first half.

It remained mostly scrappy though, and also mostly Marseille, with Mertesacker having to make a couple of vital tackles and interceptions to see us through to the break.

The second half started in much the same vein, with Arsenal almost immediately conceding a corner which eventually led to Rod Fanni smashing it across goal with Szczesny only able to watch it go past his far post. The chance seemed to finally wake us from our slumber, and a few minutes later, Ozil popped up on the right hand side and put in a cross for Walcott which went behind for a corner. Then, some beautiful football all round saw Ozil back heel the ball into Gibbs’s path, the full back doing superbly to get his shot away, and the keeper forced into a smart save.

By this point it really was end to end stuff, and a long cross from the left dropped to Payet on the right corner of the box, but his volley was saved at the near post by Szczesny. On the hour, a bizarre touch from Mertesacker saw the ball looping over Szczesny, and Gibbs had to be alert to head off the line. It was one of several telling contributions from the left back, and while others got the headlines, Gibbs was a very important player for us last night.

Finally, in the 65th minute, Walcott broke the deadlock with a stunning, and technically excellent volley to make it 0-1. Gibbs had put in a good cross from the left, the defender stooped to try and head it, but only succeeded in letting it bounce over him, and Walcott had all the time in the world to compose himself and hammer it across the keeper into the top corner for what felt like a very satisfying strike, his first of the season.

Marseille were visibly deflated, and though Valbuena had another chance from a couple of yards outside the box, the home team never felt hugely threatening after the goal.

With 6 minutes to go, Ramsey continued his excellent early season form and scored a second to make the game safe. Having received the ball from Gibbs, he turned in central midfield, ran cleverly across his man to prevent the tackle, and fired in a shot from just inside the box, a little deflection helping take it past the keeper. Arsene Wenger was delighted on the sidelines, his patience and faith in Ramsey continuing its reward, and Ramsey looked like he might’ve enjoyed it too. That’s his sixth goal in seven games now – more than he got in 91 appearances in the last two seasons. Truly remarkable, and hopefully he’s saved one more for the visit of the Orcs at the weekend.

The game was dead and buried, but in stoppage time the referee awarded a penalty to Marseille, Ramsey having stuck out a boot, over which Ayew gratefully tumbled. I thought it was harsh – Ramsey got the ball, and Ayew didn’t need to go down – but you’d be disappointed if it weren’t given for you. Ayew got up and scored an excellent penalty to make it 1-2. It was very nearly the last kick of the game though, and the referee blew the whistle for full time only seconds later.

Despite being disjointed in the first half, it was an excellent result, a sign of growing maturity in the side. They displayed patience when things weren’t going well, dug in, and when the spark from Ozil was unforthcoming, still found the resources to go on and win the game. Marseille aren’t a bad side – a considerable step up from Fenerbache – but despite their chances, you never really had the sense we were in any trouble, and that we were playing within ourselves. We’ve lost once in 18 games now, and that’s an excellent habit to (not) be in, and with Napoli beating Dortmund 2-1 in the other game, it was important we did the same.

So, a good evening to be a gooner, capped by the result from Chelsea where Mourinho’s side lost again.

Have a good one folks.