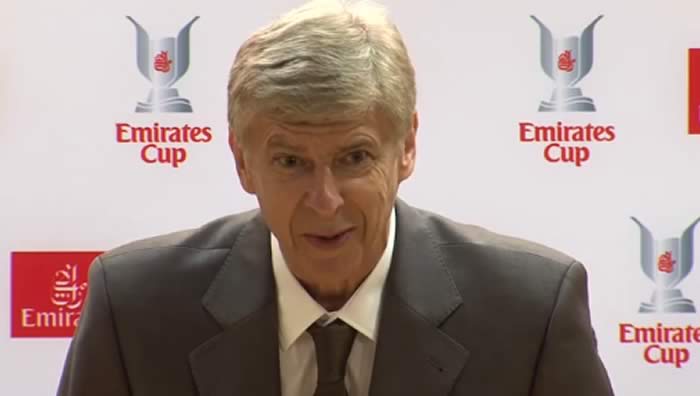 Thankfully, and I know you’ll be glad of this just as much as I am, stuff happened yesterday. Ok, it wasn’t signings, but in a pre-Emirates Cup press conference (which you can watch here), the manager was obviously pressed on his plans in this area.

I don’t want to talk specifically about Luis Suarez, because that is between Liverpool and Arsenal. We will completely respect what Liverpool wants to do. We want to do it if it is feasible in an amicable way.

And he said quite openly that he was ‘confident’ of making signings, that Chompy O’Toole was not the only player they were after, hinting that they’re playing their cards even closer to their chest than Arsenal normally do (which is stuck their chest, so much so that the cards have nipple imprints on them):

I am a great believer you have to keep as much confidentiality as possible, which is quite difficult in the modern world. But we work very hard, not only on the case you name, but on other different cases.

I know, I know, I’m still very much in the believe when I see it state of mind, but after so long with nothing at all to cling to, it’s something. The merest essence of whatever that thing is that you throw a drowning man the name of which I can’t remember now. It’s round, with a hole in it. Like an inflatable Polo mint. I’ve got fingertips on that now. Hopefully he’ll ensure we get a full hand on it, and not snatch it away to leave us flounder, but it’s something, right? RIGHT?

He made the point that the transfer window doesn’t close until the end of August, but because the 31st falls on a weekend, the transfer deadline this year is September 2nd. Hurrah! Even more time to get caught up in at all. Anyway, it seems we’re willing to go the distance with whatever deals we have in place.

He was asked if it wouldn’t be better to do deals early and get players bedded in, but gave an Arsene-ish answer which I can’t really remember but referenced the fact that Man City were the only ones spending and the market was quite static. Then someone asked him ‘What about Sp*rs?’, who have smashed their transfer record twice already, and Arsene said ‘Quick, look over there – a cloud which looks like a man on a unicycle carrying an umbrella and juggling otters!’, and everyone looked and then he legged it.

So, as always, there’s never a clear picture about our transfer dealings. There’s always a qualification, a but, a caveat. Encouragement on one hand,  the return of an ugly wart on the other. To my mind there’s no reason why we should have got to August without spending, but hey, I’m just a bloke with a blog. I would hope that key signings are made before the start of the season and not dragged out to deadline day just so we can play our favourite game of brinksmanship which is, basically, ‘You let us buy the thing we want at the price we want or there’s no deal’.

It is a dangerous strategy though. There are 2 weeks from today until the Villa game. Should points be dropped for the want of new players (which will be the only reason anyone can find for points being dropped) then it will get ugly quite quickly, I’d imagine. ‘If we’d bought X, Y and Z we’d have won that game’. You need not be a sayer of sooth to predict the reaction, and frankly it’d be to everyone’s benefit if that wasn’t a discussion we were having.

There was also the stuff about buying the right players and that’s perfectly reasonable, but then do we take the signings of Chamakh, Park, Santos and others as evidence of a man who isn’t that concerned if the signings are right or a man who has learned his lesson from deals like that? You’d like to think it was the latter, obviously.

And speaking of signings that haven’t quite worked out, it’s being reported that Roma are in London this weekend and they won’t leave without a strange-haired Ivorian they call Gervinho. It’s no surprise that he might go, in all honesty, he’s been linked with lots of clubs this summer and it hasn’t really worked out for him since his move from Lille. He’s had some good moments, but also some fairly atrocious ones.

What’s interesting, however, about his potential departure, is that it’ll be the first one this summer of a player who actually contributed something to the team. Whether you rate him or not, he scored 7 goals last season and 4 the season before. Hardly earth-shatteringly prolific, but a whole lot more than some of the players who have already gone. Whether this means we get a signing in to replace him remains to be seen. I suspect this is a move which opens the door for Alex Oxlade-Chamberlain who, at some point, has to be given a real chance to establish himself. We shall see.

Other than that, there’s the football later on, as we take on a Napoli side which will contain Gonzalo Higuain who is bound to score about 8 goals. Or be terrible. Who knows? It’s more pre-season preparation, the result really isn’t that important, but I can feel the tingle coming back now.

Or that could be that last beer last night. Either way, it’s all good.