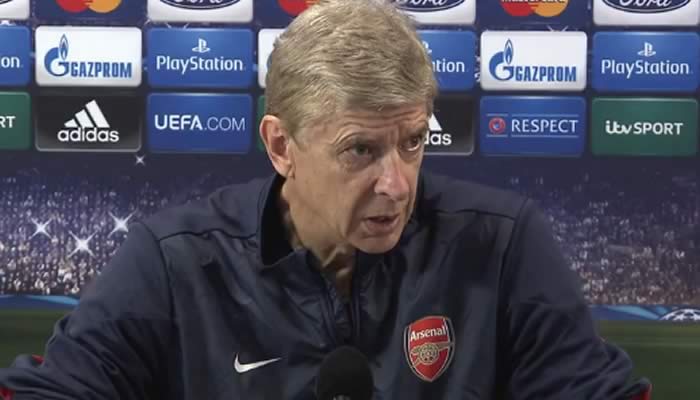 the small matter of a Champions League qualifier this evening. It’s one we go into in good shape after a fine 3-0 win in Istanbul last week and Arsene Wenger says 95% of the team that played against Fulham will play tonight. It’s hardly something that needs qualifying, options are few and far between at the moment.

I do wonder if we might see a couple of changes. Nacho Monreal might get a start at left back, Laurent Koscielny is fit again, Jack Wilshere might come back into the side after being rested at the weekend, and there’s room for him to give Lukasz Fabianski his first game of the season although after two excellent performances I think he should stick with Szczesny.

But the squad itself dictates we can’t do much more than that. As I mentioned yesterday, if we’re cruising in the second half, he’s certainly got scope to give a run-out to Sanogo and Gnabry but let’s make sure we get ourselves in that position and don’t make life difficult for ourselves.

All it takes is one away goal to make things a little bit more complicated and edgy, so there’s no need for us to go crazy this evening. What we have, we hold, and all that. It might not make for the most exciting game around but then that’s not really a necessity. That said, they really weren’t very good in the first leg, and if can reproduce the kind of football we played against Fulham then I think they’ll find it very difficult to cope with us.

The passing at Craven Cottage was reminiscent of the Arsene Wenger sides of old, and it was interesting to hear the manager talk about the squad he has at the moment. Pressed on transfers, as you would expect, at his pre-game press conference, he said:

I am guided by my conscience to do as well as I can for this club and the vision of the gamed I want to play. I feel with the players I have we can play the football we want to play.

Last season’s run-in, as good as it was in terms of results, was almost anti-Wenger in terms of how we achieved fourth place. It was like he came to the conclusion that they couldn’t play the way he likes to play. The attacking philosophy went out the window and we based our performances on not conceding first and foremost – a Bouldian pact? What’s even more interesting is that these are more or less the same players, but the style is clearly quite different.

It could be the clean slate of a new season, confidence at having done what was required last season, the pre-season preparation, or all of those things, but we’re playing a different kind of football so far. There’s still a team focus on what we do when we don’t have the ball, but the counter-attacking is swift and decisive, and for the most part we look more efficient in front of goal. Yet the only real difference to the squad is that we’ve rid ourselves of the deadwood and wasters who hardly played anyway.

So, we’ll see how they approach this one tonight. Ahead of a North London derby I’m not sure caution will be the byword, Arsene Wenger will want to use this one to boost the confidence further and I think we’re more than capable of repeating the result from last week. Building on the two good performances would put us in good shape ahead of Sunday, and who knows, by then we might have an addition or two to the squad.

The manager wouldn’t be drawn on names, despite many being chucked at him, saying:

You could see that many of the disputes you have all over the country is because the coaches or the managers speak about the players. In our job, just be discreet and try to make things happen. That’s what we try to do. Everybody has a good opinion about what other managers should do but they do not look at themselves. It’s better that you shut up and don’t say anything.

It was a nice reference to the fact that managers through the league this summer have been reacting like gigantic babies every time somebody tries to buy one of their players, something I touched on here, but even though Arsene has been quiet, let’s not be blind to the fact that Arsenal, like any club, will use the press to further a story when they need to. Whether it’s for PR or other reasons, when the same player is linked with the club in 3 or 4 different newspapers at the one time, there’s only one place the story could have come from.

There are all kinds of names floating about this morning: Ozil, di Maria, Benzema again, Flamini (with suggestions that Dick Law and Darren Dein thrashed out a contract, sadly not each other, yesterday), but we’ve been here before. Things might be heating up, and the pressure of time means that decisions have to be made, but until something actually happens it’s worth keeping a bit of distance.

Anyway, let’s get done tonight what we need to get done, then there’s plenty of time before Sunday to operate without too much distraction. The boss says he wants special players to add to the special ones he’s already got. Fingers crossed.

In other news, here’s a profile of majority shareholder Stan Kroenke from an American Gooner which looks at how he operates and the differences between owning a club here and in the US. People have asked where is the signal of intent from him, where is the leadership, the show of ambition, but it’s unlikely to come any time soon simply because of the way he runs things.

And finally, this week’s Tactics Column focuses on the win against Fulham.

Remember, if you can’t see the game later, we’ll have full live blog coverage. Bookmark the default live blog page now or check back later for a post with all the details.