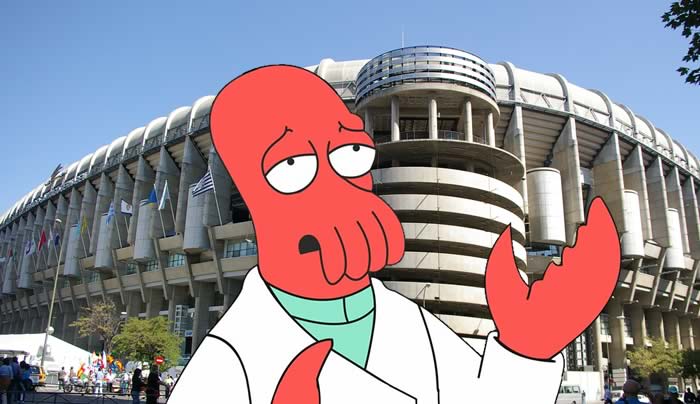 I think by the time this summer runs out I will:

a) have run out of salt

b) become such an expert salt pincher I could pinch salt in the Olympics (hey, they’re bound to make it an official sport when you look at events such as Snakes and Ladders, Milk Curdling, Hopscotch and Kick the Can which have been added to the next games).

The latest from Madrid is that we’ve apparently made no offer for Higuain. That’s according to president Florentino Pérez who said yesterday about the Argentine:

We don’t want him to go. Furthermore, nobody from Arsenal has come here, or made an offer, not €27m, nothing. There is no offer.

Having pinched a substantial amount yesterday over the ludicrous Suarez story, I feel those Zoidberg claws getting ready again. On the one hand, given our nervousness and fear that we won’t be able to complete this deal, it’s easy to think that this is information that is 100% reliable and that we haven’t been in touch with Real Madrid at all.

On the other, when you look at what his agents/family have said, how they’ve been ‘granted permission‘ to discuss terms with Arsenal, how a move is ‘close’ and so on, it makes little sense to think we’ve done this without any contact whatsoever with the club that holds his registration.

Perhaps I have my Johnny Positive hat on this morning, but I think this is all posturing from Madrid. They’ve spent money already this summer, Marca this morning is saying they’ll sign Bale before they bring in another striker, and the reality is they’re going to need some money coming in. Perhaps there’s a difference in terms of the final fee, perhaps we’re still discussing that hence his claim there’s been no offer, but I don’t think it’s as drastic as he makes it sound.

The fact is big deals with big clubs can be difficult and complicated. Despite the will of the player to leave, and an apparent will to come to us, Real are making sure they get as much money as possible for him. And I don’t think there’s anything wrong with that. I don’t believe it’s just as simple as both sides saying numbers until they reach one that’s mutually acceptable, there’s an element of Madrid showing their power and standing firm over a player who still has three years left on his contract, as far as I know.

That said, I do think that we need to be mindful their position and not try and use this as some kind of dick measuring competition (no pun Mr Law ) to show who’s the greatest negotiator of them all – clue: it’s not us. One of the Spanish dailies said yesterday that Carlo Ancelotti wants to speak to Higuain on July 15th (when their pre-season starts) to convince him to stay, the same article says that Higuain has told his people to make the move happen before then.

Again, it all sounds a bit fanciful. If they really wanted him to stay they’d surely pop round his gaff for a quick Horchata and a chinwag about his future rather than waiting for him to come to the first day of training. So, I’m hopeful this will be sorted over the next couple of days, but then we’ve been saying that for a while now.

Still, it’s further evidence that perhaps the best thing to do when the season ends is to lapse into some kind of coma, waking up on the eve of the new campaign to be surprised and thrilled (or disgusted and dismayed) at the transfer business we’ve done/haven’t done. Higauin is the ultimate watched pot, never coming to the boil. It’s the night before christmas every day of the week. But hey, it’s all part of the fun, right? RIGHT?

Elsewhere, the Mirror report this morning that Thomas Vermaelen is out of Arsenal’s tour of the far-east with a back problem and he could miss the start of the season. It’s a blow for the Belgian, who spoke publicly of his desire to win his place back having been ousted by the Mertescielny Axis of Awesome at the end of last season.

It also means that we’re very light in that department for the the start of the season. With Squillaci and Djourou gone, we’re short on numbers (rather than genuine options), and although Ignasi Miquel is in the training pictures you have to think we’ll probably need somebody with a little more experience than that. As I’ve said before, I think a centre-half ought to be on our shopping list this summer.

Quite what kind of centre-half, I don’t know. Do we go large and bring in somebody to compete directly with Mertesacker, Koscielny and Vermaelen, or somebody content to be a back-up to those guys? The problem with the latter option is that you might classify that kind of player as a Squillaci type, and ain’t nobody got time for that. Another little puzzle for the manager to figure out before the first game though, let’s see what he does.

Finally, the new away kit launches today. We’ll have a correspondent there who will try to look beyond the rather fetching yellow and blue (which should be mandatory in my opinion) and uncover some info about stuff that really matters. Like has Lukas Podolski got a thumb problem which makes him RT everyone in the world, ever? All that and more, answered later, or tomorrow.