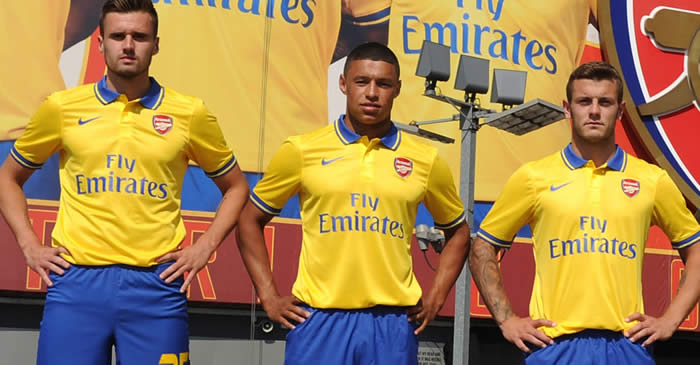 So Arsenal launched their new away kit yesterday and it’s very nice.

It is, ultimately, just a kit, but you can’t go wrong with a bit of yellow and blue and hooped socks. That’s what we’ve been missing. Not multi-million pound transfers, hooped socks. I suppose it looks even better when placed next to some of the abominations that Nike have foisted upon us in recent seasons. There’s no purple, no blue shirt, no shirt in the style of a 1920s coal-miner, no tie-dye, nothing. I think we’ll look quite swish in that.

The event itself gave Arseblog News, amongst others, a chance to have a few minutes with Carl Jenkinson who spoke about his hopes for the coming season. With the number 2 now free due to Abou Diaby taking 999, he was asked if he’d fancy it:

Gotta love that attitude and I don’t think anyone would begrudge him the number if his development and performances continued the way they did last season. Speaking of which, he talked about the impact Steve Bould had on the defence, saying:

Since Bouldy has come he’s been working on a specific drill which revolves around shape and pressing when you should press and dropping when you should drop. I guess the answer to your question is yes, we’ve worked on it. I think so far it’s been working. He’s brought in his own stamp with regards the defensive work and what we’ve been doing. As a player you do still look up to them and think, ‘You don’t argue with that, he’s done it and been there and achieved great things’. There’s a lot of respect from the players towards him.

I don’t think it’s a secret that things involving Bouldie got a little strained at times last season, but the fruits of his work could be seen as we went on that run towards the end of the season. That wasn’t the kind of defending you associate with Arsene Wenger’s teams (which isn’t to say the manager has no clue, he’s built top defences before), but he likes to play a much more attacking kind of game.

Yet an acceptance that wasn’t working, along with Bould’s experience in that area, meant that we were able to modify the way we approached games and it was a success. I think there’s still a better balance to be found as the attacking side of things did suffer a bit, but that’s surely something we can do with new players who will improve the efficiency at the other end of the pitch. Anyway, that’s something for the weeks ahead, in the meantime you can read the full interview with Carl Jenkinson over on Arseblog News.

Away from all that, and in exciting transfer news, Eintracht Frankfurt have officially confirmed they’re talking to Arsenal about the ‘purchase’ of Nicklas Bendtner. They say a decision will be made in the next 2 days. Which is good news, but I won’t hold my breath because time and again we’ve had deadlines for something to happen with this guy, and time and again it doesn’t.

The reality is that his demands and behaviour (which have made his stock fall so low) mean that we won’t get anywhere near as much money for him as we should, and some reports in the Danish media suggest we’ll be supplementing his first year’s salary at his new club. Not ideal, but that’s the bed we’ve made and we’ve got lie in it. At this point he just needs to go. For his own sake, to get what’s left of his career back on track, and he then has to be consigned to Arsenal history. All we can do is hope that this time everything can be settled, the deal will be permanent, and all parties can move on.

There’s nothing new from Spain regarding you know who. There’s more talk of the bitey racist but again I still don’t think there’s anything serious in this, and it’s dismaying to hear talk that Gareth Barry might be an ‘option’ after a bid for Lars Bender was knocked-back. I can see the sense in adding a youthful, dynamic, defensively minded midfielder to our squad. I see no sense in buying a past-it, slow, thoroughly dislikeable gimp like Barry.

Given what we’ve got to spend this summer, wasting any of it on Gareth Barry would be hard to take. If Bender isn’t the guy, find another player in that age-bracket who can do the same job. We have a 30+ player in that position anyway, and the idea that Barry would be in any way an improvement on Arteta is laughable. Plus, it’s impossible to see how the next step from Bender is Barry. It’s like offering to buy a lovely new town-house, with all mod cons, before spending your money on a shack whose floors are littered with the corpses of small, decaying animals with walls smeared with shite and dried sick.

You have the money for a barely used top of the range luxury car, and you go buy yourself a three-wheel Only Fools and Horses jalopy. It’d be the same kind of thing as walking into an Apple store, eying up one of their 27″ iMacs then finding an ad in the Buy and Sell, calling around to the home of a creepy hoarder who is wearing a jumper made up of 87% fleas and mites, and buying a Commodore 64 whose keyboard is covered in a disturbingly shiny crust.

No thanks to any of that, buy someone good instead.