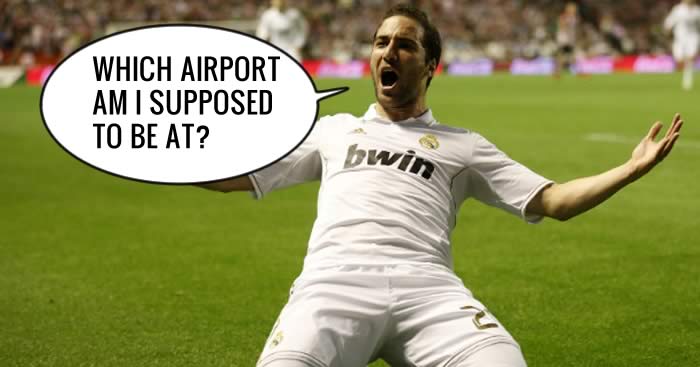 The buzz about Higuain grows buzzier by the day and yesterday there were suggestions the deal could be done as early as today. The player was in the airport. Or not. Or taking a personally chartered hovercraft over land and sea to get to London for a medical. I tend to take those things with a pinch of salt, really, but it does appear as if this is going to happen.

What was slightly interesting was the report that he’d sign a three year contract with us on wages of £100,000 a week. Even taking into account the fact that that information spread from what appeared to be a fairly random Tweet from a Madrid ITK account, it makes little sense.

The idea that Arsenal would spend £23m on a player and not secure him to a longer contract than that seems preposterous to me. The idea that after one season the speculation would start over his future as he headed towards the final year of his deal is something we’d be obviously keen to avoid. Imagine the headlines: GONE-ZALO (and such). Ugh.

Having gone through it with various players down the years, it’s distracting and unhealthy, and although we bucked the trend of losing such players with Theo Walcott, I just can’t imagine any circumstance in which we’d put ourselves through that after smashing our transfer record.

As for his wages, I’d say he’s on more than £100,000 a week at Real Madrid. I think if you’re spending a record fee on a player then you’re going to have to pay him record wages too. Not that his salary should really be a concern of ours. This modern obsession with how much a player earns and how we judge them based on that, rather than what they do on the pitch, is painful at times.

Meanwhile, in Spain Marca (Spanish link) are saying that no club has made a formal written offer to Real Madrid for the player and he’s much closer to staying at the Bernebeu than moving anywhere. Given that Higuain has made it quite clear he wants to leave this summer, I suspect this is shenanigans on the part of Marca who are happy enough to further the Madrid agenda when it comes to transfers. If it’s brinksmanship, grand, that’s part and parcel of any deal, but you’d like to think this is little more than public posturing than anything else.

We’ll find out soon enough, I suppose. I’d be genuinely surprised if anything happened today, which could mean another weekend of nail-biting and/or fuming and/or sitting in the corner clutching your knees rocking back and forward whimpering gently ‘Why won’t you just sign him? Why won’t you just sign him?’, but on the plus side the forecast for this part of the world is supposed to be lovely so we could get outside, get some fresh air and sun and have a beer. Que sera, sera, and all that.

Meanwhile, pre-season training started yesterday for some of the players. The official site carries some photos of the players running, and lifting things, and running a bit more, and giving thumbs up for the cameras. The usual first day of training stuff. Obviously some players will come back later than others. The Confederation Spaniards, for example, will be given time off to rest their weary legs, while Wojciech Szczesny was all over a Polish gossip website with his pop-star/model girlfriend, drawing their ire as he smoked what looked like a More menthol.

There was a return for Marouane Chamakh, who looked perplexed and confused (conflexed?), but no sign of Park who was rumoured to have been released from his contract. We did a little digging into that and discovered the story had come from a line in a local Spanish publication who said Arsenal had officially released him. Clearly, there’s been nothing official yet. It wouldn’t be a surprise, of course, but as yet nothing’s done.

I have given up trying to make sense of this transfer and why it happened. It’s more perplexing than trying to figure out where the universe came from (I think we all know we exist only inside the snow globe of an autistic child), so I won’t waste any more time on it, except to say I hope he and Chamakh find somewhere to play football and have a nice time and get some treats and that.

Finally for today, former Arsenal man Nicolas Anelka has joined West Brom on a one year deal. This video of him at his new club shows the lighter side of the game, and I think we all need that. His unrestrained joy and sheer delight at signing for the 23rd club of his career would soften the hardest of hearts. That smile … it’d light up the darkest of rooms. What a guy.