A very quick Sunday round-up for you. The latest on Higuain is that AS report he’s been in Madrid since Thursday, having come back from holidays in Miami, and he’s been doing a bit of gentle training.

They say the agreement between him and us is ‘total’, and has been for some days, and he’s just waiting for the two clubs to reach a similarly happy arrangement before he joins. Basically, it’s nothing we haven’t already heard, but it wouldn’t be a surprise if this were done early this week. Beyond that, there’s little to say about it.

The same paper says that Nicklas Bendtner is in Malaga, ready to sign a deal with that poor unfortunate club. TGSTEL himself hinted something was close on his Instagram page, posting the following: 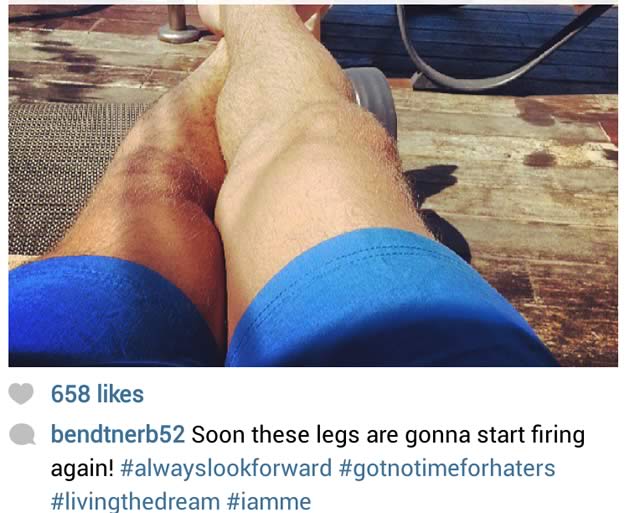 That’s some serious hashtag action right there. What better way is there to communicate? Good for him for always looking forward. Fair play for ignoring the ‘haters’. Living the dream seems a bit smug, actually. Unless your dream is to have, essentially, wasted the last two seasons of your career.

But who amongst us can find fault with #iamme. I. AM. ME. That speaks of a self-awareness that is unusual for footballers. He knows exactly who he is. He is him. #iamme.

Stunning stuff, really. I bet he wakes up every single day, looks in the mirror and says “I am me.”

Bendtner: Mirror, mirror on the wall, who’s the greatest striker that ever lived of them all?

Mirror: Famed is thy talent, Majesty. But hold, a sterling forward I see. Size cannot hide his gentle grace. Alas, he is more TGSTEL than thee.

Bendtner: WHO IS THIS?

Still, I hope this goes through. It seems a bit unfair having nicked Santi Cazorla from them for a bargain price but hey, it’s a cut throat, dog eat dog world out there. If they’re actually willing to give us real, actual money for him, and he can lower himself to accept a wage which isn’t quite as big as the one he’s on with us, then everybody’s happy.

We’re happy, he’s happy, they’re happy … for now. We really ought to put a no comebacks clause in there, just in case. Anyway, let’s hope it’s true. I think, after all this time, we deserve some good news. And maybe he can get his career back on track. He might want to work on not being such a knob though. That rarely ends well.

Right, time to do Sunday stuff. Have a good one, back tomorrow.

Previous articleThe future is now. Or something.
Next articleLuis Suarez to Arsenal? Nah.