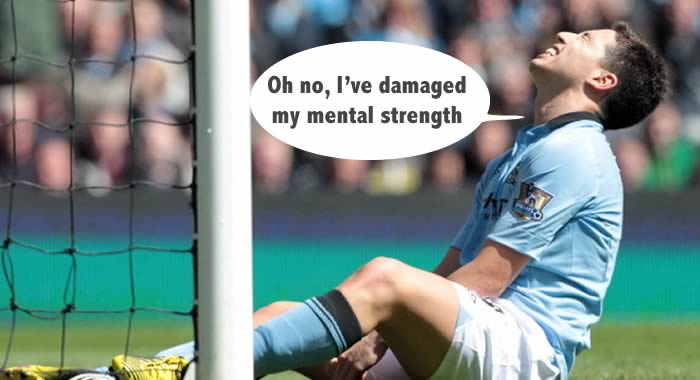 Well, despite the best efforts of all and sundry to make the  Beer TV Company Electronics Corporation Money Lending Institute Washing Powder FA Cup Final as tawdry as possible, Wigan returned some of the magic of the competition yesterday by means of … football.

You know, the thing it’s actually about. Not relentless punditry, daft kick-off times and commercial tie-ups. A late winner gave them the win they thoroughly deserved on the day, and it’d be a hard-hearted person – or a Man City fan, obviously – who didn’t enjoy what it meant to them, the manager and their fans.

A tiny club like that beating off the oil rich billionaires and their hapless bunch of think-they’re-so-great players. Roberto Mancini can complain about his squad all he likes, he bought those players. He went hell for leather to get Samir Nasri from Arsenal on the back of a three/four month purple patch when, if he’d asked any Arsenal fan who’d watched him game in game out, he’d have been told this was very much the exception and not the norm. As you might expect, after talking a lot beforehand, Nasri was the first player taken off and another big game passed him by.

Mancini, trying to win the FA Cup let’s remember, then took off Carlos Tevez and put on Jack Rodwell. Think about that for a minute. It was only fitting when it was Rodwell’s lack of marking on Ben Watson allowed Wigan to score the winner. That’s not conservative, it’s just terrible management. Taking off a striker in a cup final for a kid who has barely played all season. City looked a shambles yesterday, as you might expect given the rumours surrounding a new manager, conveniently leaked on the morning of the cup final.

And you know what? It’s fantastic to see it. This idea that money is the only way to build a football club is put to the sword by the gigantic clusterfuck their season has been. Appointing a new manager will only hand over that mess to a new man. Maybe he’ll cope better than Mancini but it seems like there’s a lot wrong under the surface as well as in the playing squad.

If I were Arsene Wenger, I’d be all ‘Hey, you know the way you like buying players from us and it always works out really well and that … *cough* … well, how about we swap our Belgian centre-half for your Belgian centre-half? Ok, you can pay us £12m too, go on then!’ In a football world packed from top to bottom with absolute shit-stains, Kompany seems like one of the good guys, and he’s clearly at the wrong club. Kom to us, Vincent!

As for Wigan, I said all along I wanted them to win it, and I’m delighted they did. Now though, I want us to smash them. It is possible that we can beat them and, if results go their way today, they can still survive on the final day (although that could mean needing us to beat Newcastle). I don’t think them winning the cup will have them any more or less motivated to get something from our game, they know how important Premier League survival is, and hopefully we can take advantage of the effort they put in yesterday.

They worked extremely hard and by the time Tuesday comes around we’ll have been off for 10 days. I know they’re all professional athletes but that could be telling in the final half an hour. Hopefully it’s a case we’ve got the game sewn up by then but going by our recent form it’s not likely be that easy. Anyway, we shall see how it goes.

As for today, there’s little happening from an Arsenal point of view but obviously we’ll be keeping a keen eye on what goes on when the Orcs entertain Sp*rs. Emmanuel Adebayor, on a high after his first goal in 16 months, says he wants to ‘kill’ Arsenal. Good for him and his desire to play to the crowd. He’s like a bloke on a cart who is pulled around for 26 miles of a marathon then jumps off and sprints for the line, gormlessly waving at the crowd as he leaves his exhausted pullers behind.

That said, there is simply no chance that the Orcs will get anything from today’s game. Sp*rs will win today, convincingly. Probably by three or four goals. It is inconceivable that they could draw or even lose. That will not happen, it cannot happen, and it will not happen. Stoke will lose. They will win. No other result is possible. I don’t know why anyone would even consider it. It is impossible that Sp*rs drop any points today.

After Chelsea’s win yesterday made third a probability for them, it means it’s down to us and them for 4th. It’s in our hands, let’s not forget. If we win both our games it doesn’t matter what Sp*rs do or how much they win by today in the game they’ll definitely win. Which is some comfort.

Right, have yourselves a good Sunday. Till tomorrow.

Things aren’t so bad, if you just pretend …