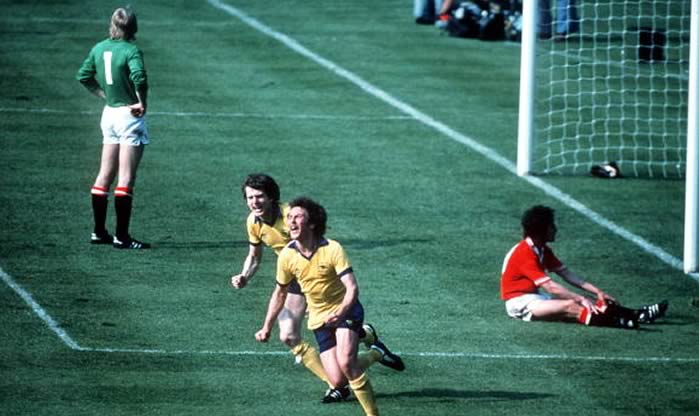 In the absence of any real Arsenal news, and given that it’s FA Cup final day, I’m going to post something I wrote for the Arsenal Collective a little while ago.

It’s about the first Arsenal game, I remember, the FA Cup final in 1979 and what that game, and other cup finals, taught me as a young Arsenal fan.

Have a good Saturday folks.

ONE ROOM, LOTS OF LESSONS

The first game I really remember is the FA Cup final of 1979. I watched it with my Dad that Saturday afternoon in our sitting room. He wasn’t an Arsenal fan. He has a vague allegiance to Fulham having spent time working in that part of London when he left Dublin in the 1950s. In fact, my first ever football memories are of watching my Dad play for his local side on muddy pitches when we lived in Yorkshire.

That day though, May 12th 1979, I spent in front of the telly wearing the Arsenal away kit. I remember it being given to me as a present, laid out in full on my parents’ bed. Shirt (made from strange, vaguely towely material), shorts (ultra nylon) and socks (socks). I think seeing it that day, the gorgeous yellow – blue – yellow, coloured, no pun intended, my view of Arsenal away kits since. The blue shirts just don’t come anywhere near the simple beauty of that combo.

So, the game. Arsenal 2-0 up and cruising towards the trophy. Then United scored twice in two minutes to make it 2-2. I looked to my father for some kind of reassurance. This couldn’t actually be happening, could it? I mean, how could these Arsenal players – to a man heroes to an 8-year-old boy (it’s only when you get older your critical faculties develop, you know) – manage to concede two goals to this Man United team – to a man monstrous, ugly brutes to an 8-year-old boy? I have a recurring nightmare about losing my front teeth and I am convinced that it was the sight of Joe Jordan in that game that did that to me.

I remember standing up, looking around for something, somebody, anybody, anything, to console me, to make it better, to make it stop, because whatever this was, I didn’t like it. I liked being 2-0 up. I liked the idea that being 2-0 up with less than five minutes to go was pretty much an assurance that you were going to win the game. Clearly I didn’t know football very well at all.

I didn’t know how it could transport you from elation to misery in less time than it takes to boil a kettle. I didn’t know that you could be happy and carefree then sick to your stomach seconds later. I didn’t know that something I was watching on television from hundreds of miles away could reduce me to panic. What if they scored again? What if it went to extra time? Although I don’t recall, I’m sure the commentators said something about how it would be United with the wind at their backs, boosted by the late comeback. And how could they not be? And how could Arsenal not be anything other than deflated?

I also didn’t know how quickly football can move you from happy to miserable and back to happy again. Before I even had the chance to get into a full blown tizzy about what I’d just seen an exhausted Liam Brady, socks around his ankles, took the ball from kick off, played it with the outside of his boot to Graham Rix who crossed it for Alan Sunderland who made it 3-2 and this time there was no way they could come back. I didn’t know much about football, but I knew that.

In that very same room, almost to the day one year later, I sat listening to the radio as Arsenal played the Cup Winners Cup Final against Valencia in the Heysel Stadium in Brussels. We had one of those stereo units that looked like a piece of furniture, lift up the lid on one side and you had the record player and the radio, on the other the tape deck. I was glued to it, fiddling with cassette copies of my mother’s Neil Diamond albums.

It was 0-0 at full time. 0-0 after extra time. Then there were penalties. Liam Brady, my hero of all heroes, missed the first. At 4-5 Graham Rix had to score to keep Arsenal in it. He missed. I cried. It came just four days after Arsenal had lost the FA Cup Final to 2nd division West Ham. Trevor Brooking made me hate the phrase ‘stooping header’ for years.

Losing two cup finals in four days is tough going for any team and any fan. The year previously I had absolute faith that Arsenal would prevail because, well, it was the Arsenal. I supported them, clearly they were the best team and all others were second rate.  The following year I came to realise that despite my belief in them, football didn’t work quite like that. What I wanted or what I thought or believed was irrelevant. I realised that football has the power to lift you up and then drop you right back down, and then give you a sneaky kick in the bollocks for good measure.

But that room, that TV and that ‘stereogram’ are as indelible in my memory as Brady’s socks, as Sunderland wheeling away in triumph, and the crackling medium wave commentary I listened to as we lost that European final to Valencia. I still don’t claim to understand everything about football, but that’s where I learned that winning and losing, ups and downs, happiness and heartbreak, are intrinsically linked and you just can’t have one without the other.

Especially as an Arsenal fan.