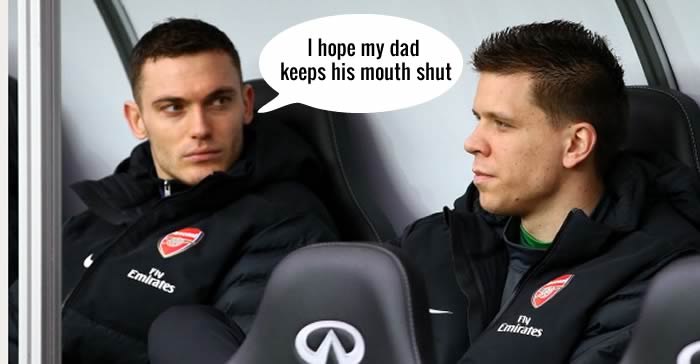 Morning all, I know I’m prone to weird dreams, but this morning, between snoozes, I dreamed that I was watching Football Focus, and Alex Ferguson’s answer to Robin van Persie’s goal drought was simple.

‘We’re going to find the biggest mains tap we can, stick it up his arse, and turn it on full blast. It worked for Andy Cole!’, he said. I am hopeful this was just crazy talk, and not an other-worldly insight into how things work on the Manchester United training ground. Or in my head.

Anyway, we’re right slap bang in the middle of the Interlull now and as such there’s the potential for a little thing to become a big thing because there’s so little going on. And such is the case of Wojciech Szczesny’s dad. He had a bit of a pop at Arsene Wenger, blaming the manager for his son’s poor form, playing him too soon after injury and, I think, the banking crisis in Cyprus.

Speaking to the local media, he said Wojciech had played too quickly and was ‘foolish’ to agree to the boss’s request in April and May, and continued:

In addition to that in August there was an metatarsus injury after which he played almost instantly. After seven weeks out Wojciech trained for just seven days and played the match. How on earth can he be on his highest form?

I think, while the man may have a point about coming back too soon from injury (which, it’s worth pointing out, is what tends to happen when a player becomes important and is needed by the team), the key word from last sentence, for me at least, is ‘August’. If Szcz Sr is trying to blame an injury in August for iffy performances recently, then I think he’s stretching things a little too far.

It sounds like a man who is disgruntled at the fact that his son was dropped. That it was for a guy who hadn’t played for a year perhaps compounded it, and so he’s gone off on one; as competitive dads and former goalkeepers are wont to do. It’s not particularly helpful but it’s hardly the end of the world either. And remember what the manager said about Szczesny and his situation just this week:

If you raise the question, ‘Is Szczesny happy?’ then of course he is not happy when he doesn’t play. Every guy wants to play. They want to play in big clubs as well where there is big competition.

And that’s what it boils down to. The simple fact is that Szczesny was dropped because the manager felt his form wasn’t good enough. The important word being ‘form’. Arsene Wenger has a lot of belief in him, but he’s got to do what’s right by the team, and although it was a brave and risky move, he’s been proved right by the last two results and the clean sheets. It’s down to Szczesny to work his way back into the team, down to him to prove that he’s got what it takes to be the best number 1 at Arsenal and that’s all there is to it.

If you’re not particularly discerning you might read stuff in one of the papers from a journalist well known for his anti-Arsenal agenda suggesting Szczesny’s Arsenal career could be over. The only thing I’ll say about that is that when this story first broke yesterday on Arseblog News, his publication ran it with the following headline before correcting it. My RSS reader picked it up though.

Rather an important part of the headline to get wrong, eh? And I don’t just mean the spelling. Personally, I still like Szczesny, I think he’s got big, big potential and I think he’s suffering a little bit from inexperience (at 22 he’s still very young in the goalkeeping world), and a little bit from lack of competition. Not that I’m suggesting he’s become complacent, but when it comes right down to it there’s nobody now suggesting Arsene Wenger was wrong to bring back Fabianski.

That’s not to say the elder of the Poles is the man for the job in long-term, but if Szczesny had been playing well enough then he’d still be in the team. He’s not a scapegoat for anything, just a player who, like Thomas Vermaelen, has been reminded that if you don’t play well enough somebody else will come in and take your place. It might even have happened sooner if we’d had a decent alternative, and it’s part and parcel of football. The only reason it’s a big drama is because of the overly-shouty dad on the sideline.

Meanwhile, 7amkickoff has a look at Abou Diaby’s performance against Swansea. It’s interesting stuff. I was one of those who felt he didn’t have a particularly good game, and I still think we were a bit better when Ramsey came on, but he didn’t have the stinker some people insisted.

And a report on the U21s win over Man Utd last night. Hector Bellerin is a young player catching the eye on a regular basis now, there was talk of him being included in the senior squad recently and more performances like this won’t do him any harm at all.

And that’s about the size of it really. I suspect tomorrow will an Arsecast-less Friday, there’s so little going on that it doesn’t make for good aural material. Swansea’s been done to death and Reading is a week away. So it’s likely there’ll be a gap until next week.

Until then. Tomorrow, I mean. Not next week.