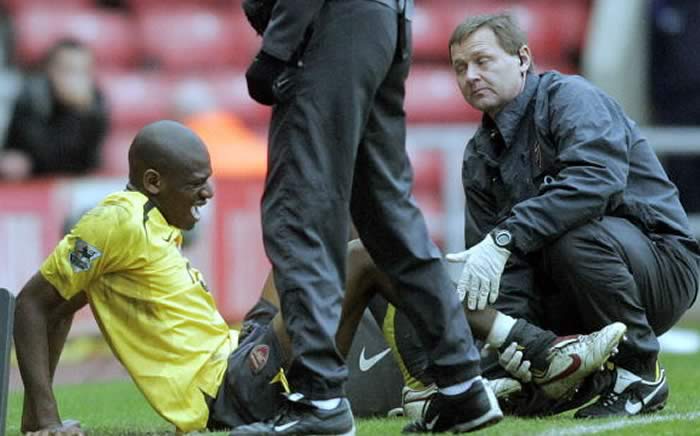 We’ll start with the Abou Diaby story, and the French midfielder’s injury curse continues as he was ruled out yesterday for up to 9 months with a cruciate ligament injury. It’s unbelievably harsh news for a guy who was happily proclaiming he’d learned to manage his own body just a few days ago. Clearly, his body doesn’t like him much.

On a purely human level it’s hard not to feel sorry for him. The fact that he earns a lot of money shouldn’t exempt him from sympathy. Sure, he earns well and he’s set for life, but money is not a shield from everything bad in this world. Plenty of rich people are depressed and miserable. If we were to dole out care and goodwill based on people’s bank balance, none of us would deserve a bit of it, simply because there are people far worse off than we are.

He’s a guy who has worked incredibly hard since having his ankle destroyed in that tackle by Dan Smith, and it’s impossible to look beyond that challenge as the defining moment in his career. He was just 19 years of age, that match was over, Arsenal were winning 3-0, and that idiot went in late, high and hard and it’s wrecked Diaby’s footballing life.

Since then he’s tried everything to remain injury free and was hopeful that this season he’d cracked it. From extra training in the summer, specialists, consultants, training regimes and everything else. He just wants to be fit enough to play football, but he’s never been able to play for long enough to become the player people thought he might be. You can’t play 5 games here, 10 games there, missing great chunks in between, and ever hope to realise your potential.

It must also be frustrating for him, as somebody who simply wants to be fit, to see players at Arsenal who have the gift of good health and who remain mostly injury free, waste away their careers, content to pick up their money rather than play the game. While it’s clearly not an either or situation, I’d be firmly on the side of the guy who was trying his hardest, rather than the fella who has given up and doesn’t care anymore. I’d rather see him paid than the bloke who did nothing at all and still lapped it up.

If there’s frustration it ought to be directed elsewhere, not at him. He didn’t injure himself, he hasn’t tried to sponge off the club, he didn’t give himself new contracts (and it was 2010 when he signed his last deal – not so recent that hoping he could become fitter was unreasonable). It’s fairly clear that Arsene Wenger was desperate for Diaby to make it, he gave him every chance to do that when other players have been moved on when injury blighted their career. It’d be fair to say that the impact of Smith on Diaby has been far greater than that of Taylor on Eduardo, but the Crozilian was, essentially, frozen out and then sold.

I can understand that Arsenal didn’t want to give up on Diaby, there were enough years left in the tank for him to make an impact … if he could stay fit. What a big if though. The sad fact is he can’t. He started this season very well, had a great game against Liverpool, then missed three months after taking a shot on goal against Chelsea. He’s come back again, now he’s gone for 9 months. And as harsh as it might sound, that really should be that for him at the club.

Nobody can ever accuse Arsene Wenger or Arsenal of not giving him every chance, of not standing by him through a set of circumstances that were not his fault, but perhaps it went a bit too far the other way. Selling a midfielder and hoping to replace him with Diaby was, at best, wildly optimistic. He isn’t a player you can rely on, the aches and niggles and strains mean he just can’t play often enough to be considered a vital part of the team. Another serious injury on top of that means he’s a full year away from being ‘match fit’.

The solution is not obvious though. You can’t ‘get rid’ of a player who is going be out of the game for 9 months. Nobody will buy him. Suggestions of paying him off and sending him on his way don’t seem feasible to me either. When has it ever happened? And while I don’t see any real future for him as an Arsenal player, what would it say about any football club that would treat a player that way?

There are, in this world, some right spawny people who, no matter how badly the shit comes down, always manage to escape smelling of roses. They can be racist, adulterous, spiteful, horrible, despicable, violent, mean and stomach churningly awful, yet always land on their feet. Diaby is the opposite. He might, from time to time, land on his feet but he’ll turn his ankle and step on a rusty nail at the same time. C’est la vie.

For me it comes down to this – you can want Arsenal to improve the squad and be more competitive and still have sympathy for a footballer whose career was needlessly ruined in an instant by a moron. The two things are not mutually exclusive. I hope that one day he manages to stay fit for a few seasons and enjoy his football. I don’t believe it will ever be with Arsenal, and I imagine this is a line crossed that will make the manager think that too, but who would begrudge him a few good seasons somewhere else?

In the very short-term, I don’t think this is an injury that affects us greatly. While obviously you want as many players fit and healthy for the run-in as possible, the truth is he hasn’t ever been fit long enough this season to become that important to the team. There are numbers, and options, once we don’t pick up any more knocks I think we can cope without too many problems.

Anyway, best of luck to him. This is going to look like a long, dark road ahead, I hope he comes through it well.

Right then, onto this week’s Arsecast and I’m joined by Tim Clark from Arse2Mouse to discuss Diaby, the return of real football and more. There’s also a bit of culture in there and the usual waffle.

That’s yer lot, have yourselves a good Friday.