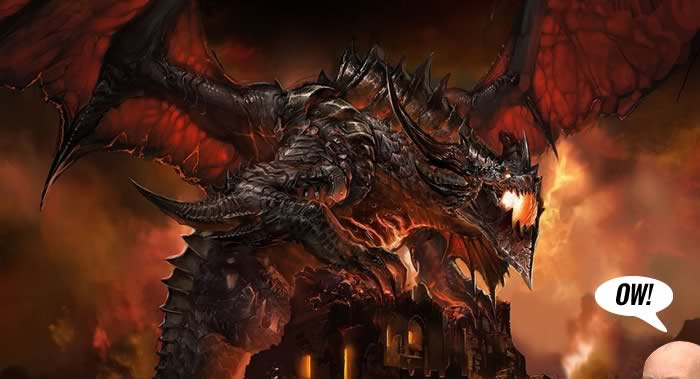 For many days the people did struggle against the lusty and vicious dragon. Their normal lives were set upon their heads as if they were Australian, and their best efforts at ridding themselves of the beast came to naught.

Fire did nothing but provide sustenance which he gobbled up like a small chuckling Russian did gobble many pies. Gigantic boulders shot from a hastily configured trebuchet had little impact; and even their most deadly weapon – a loathsome bard named Collins, a disfigured hairless creature with a voice so nasal it could often shatter sinuses, playing his foul melodies at the enemy – made no difference whatsoever.

They were starving, desperate, weakened. Conversation fell away, the only sounds made by man were plaintive cries fondly wishing things would return to the way they were. Then, one day, the dragon simply wandered off.

The people could not believe their pus-filled eyes. There was great celebration and a mighty feast. Goblets of mead and wine were drunk, suckling pigs suckled and then roasted, and the loathsome bard got up and performed a ditty he had written especially.

“There’s a dragon that’s been in this town
getting us down, In-In-Interlull, wooo-ooooh”

At which point the great dragon returned with great haste, consumed the bard and warned the people he wasn’t gone forever. After a moment during which the crunching sounds of teeth on bone and skull echoed through the village, the people did celebrate with all their might and main. For not only had the dragon gone but he had rid them of the bard.

Like the most foul and evil mythical creatures, such as Grendel, Satyr, Banshee and Johnterry, his noxious ways did permeate the landscape, but for now, at least, they were safe.

Which is a roundabout way of saying the internationals are over! I watched some of Ireland v Austria last night and it was very kind of Geovanni Trappatoni to give that Make a wish foundation fella a whole 90 minutes up front in an important qualifying game. Whatever else you might criticise him for, he’s got a good heart.

I also tried to watch a bit of of France v Spain via the Guardian who were streaming it, but it was like the worst game of online FIFA of all time. Like when the person you’re playing against is clearly downloading a boxset of any sitcom with Charlie Sheen in it (I assume they like Charlie Sheen because he’s simply not funny unless he’s having a public, drug fueled breakdown. Let’s face it, the bloke peaked with Hot Shots. How can anyone expect to better that in the remainder of their career? He fried an egg on Valeria Golino’s belly for goodness sake! An egg! Now he’s simply chasing a high he’ll never replicate. It’s kind of sad really, but anyway, I digress).

The point is I couldn’t watch that but Spain won and from an Arsenal point of view it was good news because Cazorla didn’t play at all, Giroud only came on very late, Monreal got himself a nice assist for the Spain goal and Koscielny did 90 minutes without being dragged off by his feet. That, in the grand scheme of things, is what you call a successful night.

Elsewhere, the BFG did 90 for Germania but Podolski stayed on the bench, Rosicky looks to have played a full game for the Czech Republic, Vermaelen did likewise for Belgium and that’s it as far as I can tell. Alex Oxlade-Chamberlain wasn’t used by England so, assuming Theo is unfit for this weekend, he should be nice and fresh if the manager decides to call on him.

Fingers crossed it looks as if we came through it all relatively unscathed. I guess we’ll have to wait and see if any of the guys who did play (some of them have done 2 games) have any little aches or strains, but nobody’s coming back on crutches or wearing a cone of shame or anything like that. We should get a more official tomorrow after the players come back and check in but hopefully we’re in good shape going into this weekend.

So, we can now concentrate on the football that really matters. The final nine games of the season, the push for a top four place, and all the thrills and spills that go with that.