It’s -5 here this morning. I’m sure there’s a metaphor to be made about the cold, lifeless heart of Arsenal, or something, but I can’t be arsed. I just wish I had boiling hot Bovril instead of blood. Mmmm, beefy.

We have West Ham tomorrow with talk of a ‘crisis meeting’ at the club yesterday between the manager and players. It’s an interesting one, mostly because after any difficult defeat or run of bad form, the ‘crisis meeting’ story is one you can roll out without too much fuss. Maybe there was one, I don’t know, but if there was I hope it was more than the manager barking at the players.

I think he’s right to expect more from them, but are they entitled to expect more from him? Are they content with the squad? Do they feel it’s good enough to achieve what a) is expected and b) what they’d like to in terms of winning trophies and, at least, competing for the league. We know players have left this club in recent seasons, some for more money, some because they felt they couldn’t win things, and while there’s a unique irony in footballers leaving a club because the club can’t hold onto its best players, or doesn’t seem willing to  buy new ones to improve things, it’s also hard to escape the fact that it keeps happening.

Arsenal lose their best players when they don’t want to and can’t get rid of the ones they don’t. Although they’re not at the club week in, week out, Denilson, Bendtner, Park, Chamakh and Djourou are on all loan. Guys like Squillaci and Arshavin, considered surplus to requirements, have no interest in going elsewhere until their contracts are up. The squad is imbalanced, reliant on a core of 14 or 15 and when you go beyond that, as we saw against Chelsea, the options are limited.

So, if the manager is demanding more from his players, I’d love to know if the players were demanding more from him and the club. Not that they should go out and buy a Messi or a Falcao or a Cavani, much as we’d all like to see it, but that they don’t sit there eyes closed, hands over their eyes going “lalalalalala, can’t hear anything”, until the transfer window closes.

Look at the situation involving Yanga-Mbiwa, he’s off to Newcastle for £7m. He can play centre-half, he can play as a defensive midfielder, he looked very impressive when we played Montpellier in the Champions League, and he’s a player in who we had a great deal of interest last summer before he signed a new contract. Now, we’re a centre-half down with Djourou gone, Squillaci is a step closer to first team action, it’s hard to find anyone who wouldn’t fancy a bit more steel in midfield, and where are we when this is going on? Even the Montpellier president thinks going to Pardewland is a mistake, saying:

It’s not my fault if he’s an idiot. Newcastle really isn’t a good choice

Maybe the fact he’s going there is proof of his idiocy, but maybe that’s his only option. Would he go there if he had to choose between Arsenal and Newcastle? I don’t think so. Perhaps something has changed between summer and now, perhaps we know he’s a bad guy off the field or not as good as we thought he was, but our summer interest was real enough and our need for players now is more pressing, so it’s a tough one to figure out. Especially as it’s a signing that seems to fit us perfectly from a financial point of view, not to mention ‘footballistically’.

Anyway, it’s just impossible to make any sense of what’s going on, why we’re not in the market, and why it’s come at the expense of Premier League points this month. It seems Arsene has got every faith in the players he has and I accept he’s right to expect them not to make the kinds of mistakes they have been this season – but at some point the narrative will change from ‘The players shouldn’t make those mistakes’ to ‘These are the kinds of players who make those mistakes’.

Anyway, yesterday I thought I’d have a look at where we are now compared to this time last season. You can see the table from 2011-12 on top, the league as it stands on the bottom: 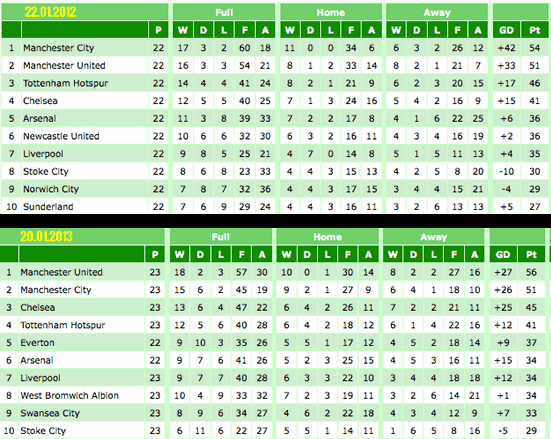 The gap between us and the leaders is certainly greater, but with Sp*rs our main rivals for a top four finish it’s somewhat heartening to see a smaller points difference and we have a game in hand. Which is a good thing because I don’t see this Sp*rs side going into a Redknappian freefall like they did last season. I certainly can’t envisage Chelsea slipping away the way they did (they finished 6th!).

But it means that as tough as it is, and as difficult a place as we’re in right now, there’s still a lot to play for and that has to be drummed into the minds of the players as a matter of urgency. We need to get a run of good results under our belt, to put some pressure on those above us at least, and it has to happen soon. I will say though, that if more is expected of the players, then that too goes for the manager, because every single time we lose a game, or drop points, his intransigence when it comes to the transfer market becomes a bigger, pointier, nailsier-in-it, stick to beat him with.

I think all we can do is hope for renewed focus from everybody at the club, players, manager, executives, Dick Law’s houseboy, the lot. If there is, and if we show a bit more of The Arsenal on and off the pitch, then we’ve got a chance to salvage a season that is slipping away from us.

Firstly, let me preface this bit by saying I think Theo Walcott signing a new deal is a generally positive thing for the club, as outlined here. But if anything illustrates the fact that footballers are living in a different world from the rest of us, and really have no clue how they relate to the ‘common man’, then it’s these kind of quotes when he talks about his new deal:

It has been tough through the negotiations. It hasn’t always shown on the pitch and off the pitch but deep down, it has been tough, not just for me but for my family, my partner. They were all getting hit with it every week and every day. I’m so pleased it’s over.

I can deal with the speculation but it’s more my family and friends, who I thought might not have been able to cope. I’ve dealt with it and I think that shows that I’ve matured as a man. I can deal with these sort of things.

Finally for today, you might have seen the image of the player fines going around, the full list of Arsenal player fines can be found here.