They say that all formations are neutral; it’s their application which decides their failures and success. Both Chelsea and Arsenal essentially played a 4-2-3-1 on Sunday but it was Arsenal’s which was made to look inadequate and it wasn’t until they switched it in the second-half, playing with one holding midfielder, did they improve.

A lot has been made of Chelsea’s flaws; that with the beauty that a triumvirate of Oscar, Eden Hazard and Juan Mata brings, it can be particularly exposed down the flanks. Arsenal might have sensed the opportunity to exploit that given the way they moved the ball against Swansea City in the FA Cup but they were unable to in the first-half because they just couldn’t get hold of the possession. Chelsea went into half-time with 60% of the play and two goals in front.

There was a bit of controversy about the goals, both involving Ramires. The first came from a foul by the Brazilian which went unnoticed by referee Martin Atkinson and off went Chelsea on the break to open the scoring. The second goal involved two tackles; the crucial one being the one which brought down Ramires although it looked like he might have “cleverly” fallen under the challenge of Wojciech Szczesny. However, it originated from his tackle to on the halfway line to dispossess Abou Diaby and for that while Arsène Wenger was unhappy, he wasn’t entirely indignant. Arsenal simply could have defended them better for both goals with Bacary Sagna’s positioning especially exposed when Chelsea scored through Juan Mata.

Chelsea’s platform for dominance in the first-half can be traced back to the way their fantastic three behind Fernando Torres danced in the puddles between Arsenal’s midfield and defence. But as Rafael Benitez was quick to praise, it wouldn’t have been possible without the splashes made by Torres. “Fernando Torres was great,” said Benitez. “He was fantastic for the team. He was working so hard. We needed his effort, his runs, his movement to create the space for the second line [of Oscar, Hazard and Mata].”

The Spanish striker won’t get the plaudits: his touch was heavy and he showed a lack of composure. Indeed, it’s clear Demba Ba is the superior striker at the moment. But Torres worked for the overall strategy of Chelsea and that was to create space for the three behind him to play. He made sure he constantly occupied the two Arsenal centre-backs, Per Mertesacker and Thomas Vermaelen, neither of whom wanted to be left exposed to his pace. As it was, they probably should have taken the risk as Torres clearly lacks belief in himself, and squeezed the space in front because Arsenal’s midfield wasn’t doing it and that allowed Oscar, Mata and Hazard to revel in the between-the-lines. 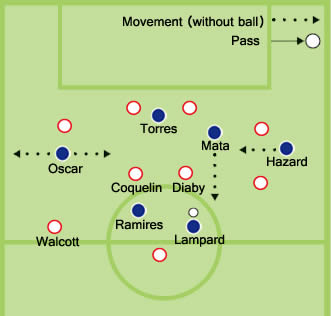 With Torres playing on the shoulder, Chelsea’s second line of attackers were able to revel in the extra space. Arsenal’s mentality, however, was too passive and that meant Chelsea were all too comfortable in possession.

It wasn’t until a change in mentality and a tactical switch to a 4-1-2-3 with Francis Coquelin as the sole holder and then later Aaron Ramsey, a bit like how Mikel Arteta has excelled as the best defensive midfielder in the league, did Arsenal cede giving Chelsea “too much room.”

The switch probably highlights the flaws of the 4-2-3-1 formation, a system Jonathan Wilson says has started to lose its shine. He writes for The Guardian that “an intelligent wide man, who drops off the full-back, can prosper against a 4–2–3–1, particularly if the opposing winger neglects his defensive work.” Theo Walcott constantly did just that, staying up the pitch which exposed Sagna.

Even though Arsenal dropped deep, they didn’t know how to deal with Chelsea’s magic three who constantly swapped positions, and as such, the intelligent wide men, as Wilson describes, prospered. Playing one holder in the second-half and pushing Diaby up allowed Arsenal to put pressure of their own and if need be, an extra body in midfield.

Suddenly in the second period, Arsenal turned the tables and led an impressive fight-back. They in turn, nearly exposed Chelsea’s inefficiencies when playing the 4-2-3-1 but Chelsea, especially Gary Cahill, stood firm. Indeed, Arsenal’s passing and movement was at times scintillating and were able to turn Chelsea back to front so quickly that it is still a wonder how a team as talented as this could be so easily inhibited as they were in the first-half.

Clearly the subtle alteration to the formation helped Arsenal to move the ball better, with Santi Cazorla increasingly able to combine and interchange positions with Jack Wilshere.

Questions will certainly be asked why Arsenal took half of the match to react, Wenger stating psychological reasons as well as tactical – of which he addressed in the second-half – for the disparity in performances. Certainly, there was a moment just before Chelsea scored their second which I feel summed up the differences between the two sides.

Abou Diaby picked up the ball in the middle of the park and looking forward for options, dwelt on the ball and was eventually forced to pass it back to Per Mertesacker. After he did, he quickly turned back to Theo Walcott and remonstrated that he should have remained in his position wide right so that he could receive the ball. Instead, Walcott drifted towards the edge of the box where play was congested. When Diaby received the ball again, he was still distracted by the inability to make the pass he originally wanted and was easily dispossessed by Ramires who eventually won the penalty.

It wasn’t that Walcott was wrong to keep wanting to get into central areas -indeed, he was Arsenal’s main threat coming in off the flanks – but he needed to be cleverer, more selective with his runs. Actually, Arsenal’s movement as a forward unit needed to be more intelligent. At the same time Jack Wilshere, overwhelmed by Chelsea’s dominance, was seen constantly gesticulating to his team-mates to press harder and at one point, even looked to the bench to ask them to do something about it. In the end, Wenger might have drawn encouragement from the reaction in the second-half but such psychological freezes that we saw in the first-half have become all too frequent.

They were tactically naïve.