Steve Clarke’s post-game comments suggest there’s still much more for Arsenal to do to rebuild their formidable reputation even after their comfortable 2-0 win on Saturday. “We knew the longer the game went, the more pressure would come on Arsenal and then we would have a chance to play,” said Clarke, adamant that his side could have done what Swansea did if the score had remained goalless. Purely looking at shots attempted, though, one might feel Clarke is being a little optimistic because West Bromwich Albion only managed 8 shots to Arsenal’s 19. However, considering that only three of Arsenal’s total shots were on target, and two of those were penalties, perhaps Clarke had a point.

Except, that would be telling half the story because unlike against Swansea, where Arsenal had only 10 shots and visibly had trouble creating openings, there was more purpose about Arsenal’s play and especially in the case of Gervinho, were a more confident player away from adding to their goal tally.

Not all of Arsenal’s swagger returned although a move which started with a quick triangle between the enticing triumvirate, Mikel Arteta, Jack Wilshere and Santi Cazorla, and ended with a Alex Oxlade-Chamberlain cut-back, showed that it flickers from time to time and is not too far away from burning for longer.

In the main, Arsenal’s play was about releasing the ball quickly, avoiding the clutter and nuisances in the middle of the park and combining with pace. Gervinho was released on a number of occasions and should have finished but his speed was always an outlet.* It was Jack Wilshere, though, who typified Arsenal’s new-found urgency and was usually the impetus to begin attacks. He dovetailed well with Santi Cazorla and together, they look a formidable duo, capable of turning defence into attack quickly. That would be music to Cazorla’s ears in particular, as he has had to shoulder that burden in Abou Diaby’s absence. Against WBA, the pair drove Arsenal forward and with their ability to change the emphasis and speed of Arsenal’s attacks gives a dimension to the team which I wrote was lacking in previous matches. 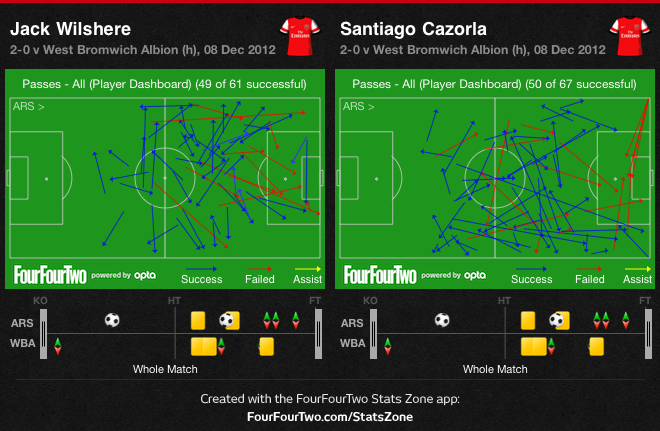 While the return of Wilshere close to his best is a timely boost, others step to the plate too. Alex Oxlade-Chamberlain delivered a mature performance, choosing wisely when to roam inside or stay wide; while Mikel Arteta was imperious in front of defence too and his two goals should convince him of his attacking prowess. (His relationship with Wilshere, timely enough after my last piece, looks to finally developing the understanding required with Wilshere saying: “I speak to him during the game. I say ‘Mikel if you want to go forward, I can sit.’ It’s quite a good understanding.  He knows I want to get forward and try and get on the scoresheet. He’s the same. At Everton, he was our most attacking midfielder. I think it’s a bit of both. But I think he lets me go [forward] a bit more than he does.”)

* Wenger’s deployment of Gervinho, especially in the first-half, was interesting. He pushed the Ivorian up the pitch, almost as a wide-forward at times, closest to Olivier Giroud. Wenger likes taking the initiative early on in matches and as such, Gervinho pace looked to be exploited when the match could be described as its “most open.” Other games such as Everton away and Montpelier at home, he used Walcott and Podolski respectively, pushing up on the left (with Santi Cazorla usually covering and someone balancing on the right. In that sense, it highlights Oxlade-Chamberlain’s increased maturity against WBA to remain disciplined).

While the way Arsenal won their two penalties might be disputed – Cazorla did dive while Oxlade-Chamberlain’s dispossessing of Goran Popov bordered on punishable by free-kick – Wenger will be happy that Arsenal never let up as they might normally after they scored the first spot-kick. And when Oxlade-Chamberlain won back possession in the lead up to the second, it typified their graft on the evening. Indeed, it’s a good question to ask to what degree was Arsenal’s improved pressing 1) tactical; 2) psychological or 3) due toWest Brom’s approach? The answer probably is a mixture.

Certainly tactically, there was nothing drastically different to Arsenal’s pressing strategy in this game. The way Arsenal play, they chose to close down opponents only after they get into shape, usually in their own half. But due to WBA’s slow passing – a stark contrast to Swansea last week – Arsenal weren’t forced to retreat into shape quickly. Instead, they could push higher up the pitch and win the ball back where it caused most problems. Indeed, Borussia Dortmund coach Jürgen Klopp says “the best playmaker on earth is (gengen)pressing” (his own term for asphyxiating high-intensity pressing). For a team that likes to pass the ball as Arsenal, it suits them if they can press the opponents high up the pitch when it’s possible. They did so on Saturday every time West Brom moved it backwards and got their reward when Oxlade-Chamberlain forced a foul from Chris Brunt after stealing the ball at the edge of the box. 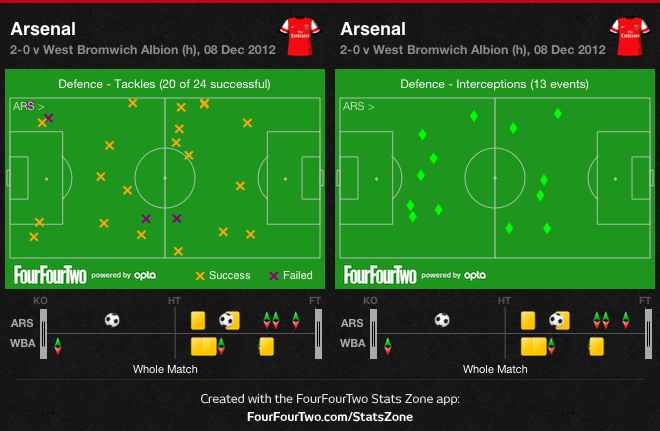 Certainly, West Brom were hamstrung in their ability to pass the ball out due to the absence of their most important player, Claudio Yacob, a neat distributor in front of the defence. Nevertheless, complacency was never a thought that crossed Arsenal’s mind. They knew that they would have to work hard to win the game after the defeat to Swansea, a game which Wojciech Szczesny admitted they thought they “should be winning comfortably.”

There wasn’t the same self-entitlement this time and it was evident to the crowd from the first-minute, that their approach to this game would be markedly different – for the better. Wilshere embodied that, showing purpose with the ball, driving the team forward and then a tigerish focus when without it. “He won balls when he closes down and he made a difference running with the ball,” said Wenger. “He’s an enthusiastic player – he goes for the challenges the day before a game. I don’t hold him back because I think it is good to have that attitude. When the best players have that attitude, you have always a chance.” With that sort of mentality, Arsenal certainly gave themselves the best chance of coming away with the three points against West Brom.