As you’d expect this morning’s blog is jam-packed full of information about the players we’re going to sign and … damn, sorry. That’s my other blog in opposite world. Oh well.

Arsene will have a press conference today ahead of tomorrow’s game against the Mugsmashers and we might get a bit of clarity about what the plans are. Probably not though. As usual he will talk about how he’s got to focus on the players who are available and not the ones we have sold. Or are about to sell. Or that we haven’t bought yet.

Which, ahead of an important game is entirely the right thing to do, but I hope Arsene chooses his words carefully. I don’t think he realises that one badly placed ‘super quality’ or a slightly premature ‘We are not close to …’ could actually cause the entire internet to quite literally explode. There are people who make their living from the world wide web, he’s got to bear that in mind.

Naturally there is concern and worry about where we are. Cescless, waiting for Nasri to complete his move to the sunny climes of Manchester, wracked with injuries and fretting over the fitness of Armand Traore. Nothing else quite sums up where we are better than that.

Early team news ahead of tomorrow’s game is that Gibbs is out with a hamstring problem but Djourou’s strain is not so bad and he might be fit. Traore is, I suppose, a left back but if he’s not fit then it’ll be interesting to see what the manager does. Will he give Jenkinson his first Premier League start, maintaing the burgeoning partnership between Koscielny and Vermaelen, or will he move the Belgian out to left back and play Djourou in the middle?

The more pressing issue is in the centre of midfield where Tomas Rosicky is a doubt. If he misses out our midfield options are very light indeed. Wilshere is injured, Diaby is injured, Song is suspended, which leaves us with Ramsey and Frimpong (best Flinstones chant right here) and that’s it. The chances of signing a midfielder between now and then seem slim, to be fair, so what does he do? Will Lansbury get a chance? Will he play Arshavin as the more attacking of the three midfielders and give The Ox a start as part of the forward three?

Even talking about these potential line-ups gives you a real sight of just how badly this squad needs strengthening. I know there are injuries and suspensions but it needs it when those players are back too. Another week has chugged along and come to an end without anything happening. Of course we’re not privvy to anything that might be happening behind the scenes but all we’ve got to go on is what plays out in public and what we see before us. And right now it’s very worrying.

So no doubt Arsene will be asked about that today, about his plans, about potential newcomers, and he’ll play with a straight bat giving nothing away. I’m sure there’s stuff going on, there has to be, but sometimes you get the feeling Arsene plays his cards so close to his chest he can’t even see them. Then when it’s time to call and show what you’ve got he goes ‘Ta-daaaa’ and lays out the three of clubs, the six of diamonds, the king of spades, that one with the rules of bridge and Amaury Bischoff’s business card. 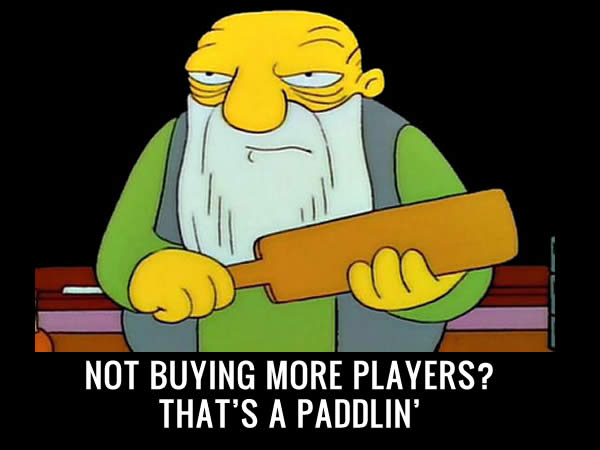 So, let’s see what plays out today. Arsene will also find out if he’s going to face further charges for the Champions League nonsense. He claims to be a bit confused by the rules, and while I certainly believe UEFA have their heads up their arses and make life difficult, I’m pretty sure a man as clever as Arsene knew well enough what he was allowed to do. Fingers crossed nothing comes of it.

Meanwhile, David Dein has come out in defence of Arsene again. Apparently it’s part of a Football Focus interview that will be screened on Saturday. That’s the second time in as many weeks he’s gone public, and at a time when things at the club are difficult. Curious. As is the thinly veiled threat about Wenger’s potential departure. Especially when you consider we know how strong the friendship between Arsene and Dein still is.

I don’t think there’s any fan who doesn’t respect Arsene for what he has done and what he’s achieved at the club. That doesn’t mean he should be exempt from criticism now though. If you take the plaudits when times are good you have to expect some censure when they’re bad. I think some of the opprobrium goes much too far but if you had to sit down at give him a mark out of 10 for the way he’s managed the summer thus far it wouldn’t be very high.

It’s not all down to him, in fairness, I think there’s frustration at how the club is being run in general. From boardroom to pitch we’re like a one legged man trying to get up a down escalator at the moment. But Arsene is the figurehead, the man who ultimately makes the decisions about buying and selling, and when we’re in a position where we’re going into a game against Liverpool with only two fit central midfielders, one of whom is yet to start a Premier League game and has a total of 25 minutes first team football under his belt, I don’t think it’s unfair for people to express their concern.

So Dein, making those vaguely passive aggressive statements, is a little hard to take. If he’d wanted to continue to have an influence at Arsenal Football Club, to have a say in how things were run, the very easy thing for him to have done is not sell his shares to a random billionaire.

Anyway, away from all that now and time for this weeks’s Arsecast. Joining me to discuss the state of play is Amy Lawrence, and with me to dicuss the Mugsmashers is the Mugsmasher himself. There’s also Internet Joe, Arshavin and the usual waffle.

You can subscribe to the Arsecast on iTunes by clicking here. Or if you want to subscribe directly to the feed URL you can do so too. To download this week’s Arsecast directly – click here (31mb MP3) or you can listen directly below without leaving this very page.

Ok then, let’s see what bounty this press conference bring us this morning. Any breaking news or developments can be found over on Arseblog News.

Back tomorrow with an (early) preview of the Liverpool game. Till then.