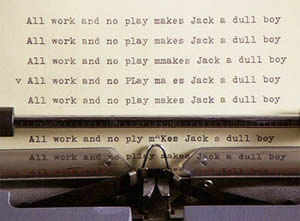 However, I did get a bit of an exclusive. Arsene has been in his office, working obsessively on transfer targets and my super serial spy managed to take a pic over his shoulder as he was working. That was before Arsene saw him, chased him around with an axe, smashed open a door and was about to say “Heeeeeere’s Jooooohnnyyy!”, until he realised he’d sold Johnny a week last Tuesday.

As we sit anxiously awaiting reinforcement it looks as if the next big deal at the club will be $amir Na$ri to Man City. Reports yesterday suggested his salary will be £200,000 per week with a signing on fee of £5m, net. When you look at it, who wouldn’t have their head turned by that amount of money? He and his agents have played Arsenal, played United and City off each other, and when your pockets are as deep as City’s you can afford to pay whatever it takes.

That is the harsh reality of the football world we live in at the moment and there’s not much we can do about it. If it comes down to a straight choice between us and City over a player, they’ll generally come out on top because of what they can offer.

“What’s that you say? You’d like a truck full of fresh orphan meat delivered to your house by an endangered species of panda. That you’d like strangle to death whilst you have sex with it? Sure! No problem at all”.

We heard how much City were paying Yaya Toure when they signed him from Barcelona. A little bit above the £200,000 Nasri is going to make. You’d think for that price ol’ Yaya could rent himself a semi-detached house in a reasonably nice estate. Except as part of the deal City are paying over £1m per year to rent a mansion for him. We know clubs look after the players and offer them all kinds of things to make them sign, but this is a whole other world.

On the plus side though, it looks as if we’ll have another £25m coming in which I’m sure will go straight into the team, alongside £36m, for Liverpool this weekend. It is a remarkable amount of money for a player in the final year of his contract and even for City’s deep pockets it seems a bit, well, considerable. It’d make you wonder all right. Perhaps, if you thought about it, you’d cast your mind back to the comments that Arsene made about Mancini back in mid-July after the City manager spoke openly about signing Nasri.

I think the comments are not allowed. They are against the basic rules of football and he should be informed. What we want is respect and we don’t make these comments about players who are under contract at other clubs. Disrespectful? I cannot say otherwise. This comment is absolutely out of order.

Was it just the comments that were out of order though? Perhaps there was behaviour that was outside the rules. Contact between player and potential new club without the permission of his current club. You know, it’s almost as if someone stumbled across the scene and thought ‘What are Man City doing? It looks like they’re going about the place tapping. But which direction are they tapping? Well, it’s not down. They’re not tapping down. Nor sideways. Nor diagonally. It’s almost as if they’re tapping … oh …”.

And we all know tapping in that particular direction is not allowed. Could Arsenal make a fuss? I suppose they could. Would anything happen? Probably not but being pragmatic about the whole situation would make sense for both clubs and if the final fee included a ‘thanks for not making a fuss’ stipend would anyone be surprised? Anyway, the sooner we get the deal done the sooner we can get the money and stick it under Scrooge McDuck’s Arsene’s mattress.

Away from transfers, but still tied in with the awesome depth of our squad, Alex Song’s 3 match suspension was announced after he accepted a charge of violent conduct. There’s a lesson here for all footballers: picking somebody up off the ground and throttling them is a yellow card, lightly trampling on somebody’s calf is a 3 match ban. Song was stupid, no question about it, but lads, the next time we play Newcastle, can we either ignore Barton completely or fuck his shit up completely? I’d like to see him RT Nietzsche without any arms. Or eyes. Or a torso.

Arsene will find out today if he’s going to face any further charges from UEFA for the sneaky communication business during Tuesday’s game. On the one hand you’d think common sense would prevail and that we could just get on with things. On the other you remember this is UEFA, an organisation which makes a player serve a suspension for a ridiculous red card received 6 months earlier in the previous season’s competition. So, let’s expect some more fuss and if it doesn’t happen we can be pleasantly surprised.

There’s not much in the way of transfer speculation this morning. There might be some dismay at seeing Juan Mata linked with Chelsea but I still think their main target is Modric and this is a bit of a smokescreen. The only player linked with us is Mertesacker and that’s in the Mail. Yes, the same Mail who blah blah blah. And honestly, if I hear the names Jagielka, Cahill or Samba again this summer, I’ll … I dunno what I’ll do actually. Probably nothing but I’m sure you know where I’m coming from.

Archduke Frimpong Frimpong III talks about taking his chance. With Song’s suspension, injuries a-plenty and fewer signings than a Theo Walcott book launch he could very well make his first Premier League start on Saturday against the Mugsmashers. And surely any song for this lad has to be to the tune of the Flinstones?

“Frimpong, something Frimpong, he’s a something something blah blah blah”. Needs work. Over to you song makers (but not the Chamakh Iraq bloke, you had your chance and you blew it, sir).

Beyond that, not a lot happening. Hoping Arsene and Ivan head out to the footballing Lidl today to replensish the larder. Won’t be holding my breath though.

Back tomorrow with an Arsecast. Till then.