if last season’s re-signing of Sol Campbell had a few people scratching their heads, yesterday’s news that Jens Lehmann is more than likely going to come on board for the final ten games of the campaign will have had some scratchy fingers out again. He’s 41, retired and, as we all know, completely mental.

However, my thoughts on it are thus: 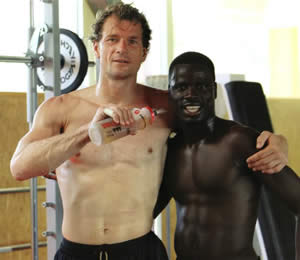 1 – Better the devil you know: Arsene knows Jens, his character, how hard he’ll work and everything else. Take some randomer in from somewhere else and you have no assurance that he won’t be a total cock who might like to play Phil Collins tunes in the dressing room. Most of the players know him, so there’s no issue there either.

2 – It’s an emergency signing: Desperate times often call for desperate measures. And let’s face it, we’re desperate for someone to back up Almunia after the injuries to Fabianski, Wojscez©® and Mannone. That it’s a 41 year old makes little or no difference to me. Regardless of who you try and get the only keepers available for loans at this time of the season are ones so far down the pecking order at their clubs that when it comes time to peck their beaks are nigh on useless.

3 – Experience: How many of this Arsenal team, which is already low on confidence and moral, have gone the distance in a league title campaign? The answer is … none. Yeah, Gael Clichy has a medal from the Invincibles season but he was a kid swept along by the tide of awesomeness.

To have even one player in that dressing room who has been there, done that, worn the t-shirt, urinated on the t-shirt and thrown it at Sp*rs fans, could well be very important. A mature voice who people will respect because of what he achieved and how long he played. He can motivate and reassure and I think his presence could be very positive in this regard.

4 – Professionalism and standards: We know Jens has high standards, he expects a lot from the players he’s playing with. Now, all things going well he’s probably not going to play at all but that doesn’t mean he won’t be afraid to speak his mind should he notice any slacking. A bit of fear might get that bit extra out of one or two of them. And as an example to them, a man who played till he was 40, gave everything in training to keep himself fit and ready for the game, that could be of benefit too. He might also keep Almunia on his toes.

5 – Mentalness: It should not be overlooked that all great teams need a bit of this. It wll shake things up on the training ground, in the dressing room and on match days. I can’t be the only one who thinks this Arsenal team is a bit meek, maybe Jens can bring out the inner loon in a couple of them and that would be no bad thing.

Of course many people will point to the fact that there appeared to be a fairly poor relationship between Almunia and Lehmann during their time at the club. This is indeed true but Jens know his role now and says:

This time I’m looking forward to my role on the bench, I will support Almunia. We can win the title – source.

The relationship between them has been better in recent times, perhaps that’s because of the distance, but I’ve seen Jens talking in very complimentary fashion about Manuel when doing the odd bit of punditry on Sky. And the two will have something in common now, both knowing how it feels to find themselves frozen out for the best part of a season.

Almunia’s lucky in that injuries have allowed him a return but if there was the danger that any personal enmity between the two could cause even the slightest disruption at this stage of the season then there’s no way the manager would bring him back. That’s the bottom line. As I said, he’s there as back-up for Almunia, he won’t be expecting to play, and his signing, should it happen, makes sense on a number of levels. If something happens to Almunia – like someone mysteriously pushes him down a flight of stairs or something – meaning Lehmann has to come into the team then I might well have concerns about how a 41 year old can cope with the Premier League again.

However, you need only think back to Saturday and the performance of Edwin van der Sar to realise that age is not a massive impediment to performance. Jens is obviously in good enough shape, this is a professional football club, not a old boys club looking to make someone’s wish come true, so we’ll have to trust that he’s the guy to fill the gap if this goes through.

And you just couldn’t write this script, could you?

Now, interesting news emerging from the Swiss FA suggests that Johan Djourou’s season may not be over. They go as far as to say he might even play against Bulgaria on March 26th pending further tests. Obviously we’ll have to wait and see but if it’s a simple dislocation which they can pop back with no resulting ligament/bone damage then we might well be lucky on this one. It would be a massive boost to have him back so fingers crossed. And if it does happen, and I’m keeping everything crossed, it’d be the second reported season ending injury he’s come back from. We need to change his first name to Lazarus.

Mournful D, as Leopold calls him, won’t be so mournful after all. Cheers to Swiss Ramble for the heads-up.

Fabio Capello on Jack Wilshere, he reckons he could be England captain one day. I hope that when it happens Jack’s first edict is the summary execution of John Terry.

And props to Henri Lansbury for a crucial late goal for Norwich last night. Clip here – go to 1’38 to see the goal. Of all the players out on loan he seems to be the one really making a mark. Let’s hope he keeps it up between now and the end of the season and provides our squad with some fresh Arsenal blood next year. It’s all down to how hard he works though.

And that’s about that for this morning. Until tomorrow, Jens fans.

Previous articleI’m holding out for one
Next articleTim Stillman column: Beware of the Keeper