And then there was one. Admittedly the shiniest, most prestigious looker in the bunch, but having stumbled out of three competitions in fourteen days, it still feels somewhat deflating. If one more po-faced twat accosts me with “ooooh, you lot were talking about the quadruple two weeks ago” I think I’ll hack liberally at his testes with vinegar soaked razor blades.

Clearly Arsenal fans did not entertain any thoughts of completing the clean sweep. It’s a classic, tired media trick. Journalists talk about Arsenal doing the quadruple, taking no cue whatsoever from the club and then when it unravels (as it was obviously going to at least some small degree), they clamour over themselves to pretend that their own column filler was the invention of the club somehow. They then mock their own fabrication. It’s the sports journalist’s answer to knock down ginger.

As you come to expect from your modern Arsenal fan, there’s a fair bit of doom and gloom doing the rounds – hanging ominously on the air like a particularly unpleasant fart. I guess you come to expect that given the torrid time the team have had over the past fortnight. In isolation, there’s little shame or surprise in going out to Barcelona and an away tie against Manchester United in the F.A. Cup. But the Carling Cup Final defeat appears to have eroded some cautious faith amongst the support. When the team sheets were read out at Old Trafford on Saturday, my sense of cautious optimism morphed into a conviction that we would, at the least, get a replay.

But Ferguson is no chump, that wasn’t just a cobbled together team of reserves. He knew that playing three defenders in his midfield would aid and abet his game plan of sitting back and soaking up the pressure. He also knew that Arshavin’s abject laziness made Arsenal’s left side a veritable fish barrel prime for some target practice. Coupled with the slightly more callow Kieran Gibbs at left back, United got a great deal of joy and two goals out of forays down that flank.

I’ve been an ardent defender of the guy for a long time now, but I must say I am beginning to lose faith in Arshavin’s ability to be anything other than an impact sub. A man of his experience should realise that his “I’m such a lazy genius that can do everything at half tilt” impression is not really appropriate in crucial games such as Wembley finals or games we are chasing at Old Trafford.

Some would say he has always been that way and now he’s no longer the shiny new marquee signing he was two years ago, we’re more prepared to see his flaws. Much in the same way that the way your new girlfriend’s jaw clicks when she eats melts your little heart in those first couple of months together. But enough time passes and you can barely disguise your scowl at her over the dinner table. At 30 it’s hard to see how he can be taught and that Ferguson can target such an experienced and talented player as a weak link so successfully has to be of concern. He was booed off by a lot of the travelling fans when he was substituted on Saturday.

That said, I don’t believe United gave us the traditional schooling that some would have you believe. In recent years they and Chelsea appear to have developed the knack of keeping Arsenal at arm’s length. Like a gangly gentleman placing his palm against a midget’s forehead and allowing him to swing wildly and unsuccessfully at the torso. Arsenal amassed 11 shots and found van der Sar in inspired form. What was worrying was the lack of a cutting edge, without Cesc and Walcott we weren’t nearly penetrative enough. Fact is United scored two goals with a tad over half of the attempts we amassed. Ultimately, we were guilty of conceding the first goal when we were under very little pressure.

I think a lot of the doom and gloom has masked the fact that we’re in a thoroughly decent position in the league. Three points behind with a game in hand and a home game with United to come should technically put is in the box seat. But it’s up to us, all of us, supporters included, to dust ourselves down and make one final push for the run in. We are in a better position in the table than we have been at this stage of any season since the unbeaten season. Even in 2004-05 when we finished 2nd, we were ten points behind on 5th January and did not get any closer come May.

I think we would have taken that at the beginning of the season. I realise the belief amongst supporters is faint. I haven’t heard the “We shall not be moved chant” emanate from a Gooner larynx since that fateful day at St. Andrews in February 2008 – which tells a story – but United are tied up with other concerns, a win at the Hawthorns and we go into the interlull feeling a little more enthused. 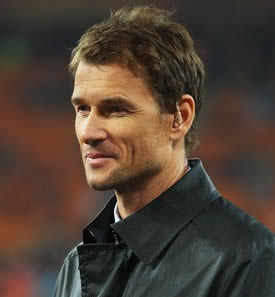 There is also the possibility of a popular old face reappearing for the run in. With the goalkeeper situation at Cuban Missiles Crisis point, Jens Lehmann has been tempted from retirement to provide back up. Is it too early to open the book on which member of the Invincibles will be drafted in for our injury ravaged run in next season? Perhaps 54 year old Kanu can add some firepower to our front line in the spring of 2012? I hope Jens gives the squad a lift – I am sure it will give the supporters a timely boost.

Jens might be madder than Homer Simpson on a toad licking binge, but he also knows what it is to represent this club and he certainly passes the “get yer medals out” test. Hopefully he can pass on that valuable knowhow to the squad. In truth, we’re going to have to hope that that is as far as his involvement goes. Removing the mists of sentimentality, he ultimately left three years ago because he was no longer up to standard, so he’s hardly likely to have found the fountain of youth in his sabbatical and returned as the 2006 version of Jens. Let’s hope we can meet and greet him in the warm up but leave it at that.

Except when we play Stoke. Purely for comedy value he has to play at the Britannia. I have visions of Stoke City players’ heads rolling around the penalty area, whilst the detached bodies wander around baffled. I’ve a friend who saw Jens at Heathrow Airport after the 2004-05 season. It was June and Jens was with his family, clearly off on a private family holiday, yet he was still wearing an Arsenal polo shirt. I’m sure you will agree that that, my friends, is fucking bonzer.

A final word on the Arsenal Reserves too, who make a return to Underhill on Wednesday night after a winter of behind closed doors fixtures. I find it such a shame that the club have taken the decision to play so few Reserve matches in front of crowds at Barnet this season, I really hope they reconsider next year. Not only are reserve matches a valuable way of getting youngsters into the live football experience without spending £50 on a ticket for the wee nipper, (who then yawns and fidgets his way through the match), but it also gives sad trainspotting bastards like me time away from our 2003-04 season review DVDs and gets us some fresh air. Try and get down to Barnet on Wednesday night for the Liverpool game if you can. Hope to see some of you there. Up the Arse.LD.