Arsenal back on track, now for Chelsea

Back on track with a good, if not always convincing win, but Sevilla’s 3-0 win in Prague means we finish second in our Champions League group.

With one eye on the Chelsea game we saw Lehmann, Senderos, Traore, Song, Denilson, Walcott and Bendtner all start while there was a welcome return from injury for Robin van Persie. We started very brightly and Theo could have had two before Diaby opened the scoring on 8 minutes when he collected Sagna’s cross from the right and turned it home. 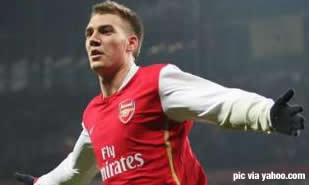 We pretty much dominated the play, Steaua are not a particularly good side, and went further ahead after 42 minutes when Nicklas Bendtner took a Robin van Persie pass, went past a defender and slid it home. It was a very nice finish and looking at Bendtner during the game he found himself in some great positions but was let down by poor final passes from his teammates. I suppose you could say Theo Walcott was guilty of that a bit but I much prefer to look at the positives of Theo’s performance. He looks much stronger, much more confident and although his finishing and passing was off he created some good space to have those opportunities in the first place. Another 90 minutes will have done him good and when he sorts himself out in front of goal he’s going to be a real weapon. He also showed an ability to work back defensively that we haven’t really seen before so long may that continue.

The second half saw them come back into a bit, in particular they exposed the space behind Armand Traore a number of times and they got a goal with about 20 minutes to go. Zaharia’s looping header found Jens a bit flat-footed but I suppose you can expect that after so long without first team action. We had more chances to score, Theo again might have done better and a finisher like Eduardo will be disappointed with his half-arsed attempt at a chip over the keeper. They might even have snuck an equaliser with a long range effort that flew just wide but that would, I think, have been unfair on the lads. Overall I think there was plenty to be encouraged about last night and it was important we got back to winning ways.

I thought Diaby had a very decent first half and Bendtner showed he can score goals and take his chances when they come. He’s got to be on the bench at least for Chelsea and his touch and presence are very impressive at times. It was good to see Robin van Persie back though. He brings so much creativity and unpredictability to the attack. He played a great ball through to Theo for the early chance which went just wide and is prepared to have a shot from outside the area too. The 60-odd minutes he got under his belt led Arsene to declare him ‘ready’ for Chelsea and with question marks still over Hleb and Cesc that’s a real piece of good news.

So, second place in the group means we get one of Inter Milan, AC Milan, Porto, Barcelona or Real Madrid. Nice. When you consider the top spot would have us choose from Roma, Olympiakos, Schalke, Celtic, Lyon or Fenerbache there’s no question finishing top would have made our life easier but since when has Arsenal ever made life easy when there’s a way to complicate it. We beat Juventus and Real Madrid on the way to the final two seasons ago and lost to PSV last year so there are no absolutes in cup football. It might have been easier but it isn’t so let’s get on with it and have fun. I think I might put some money on it being Barcelona. I have a feeling in my testicles it’ll be Barcelona. The draw takes place on December 21st.

I’m not at all disappointed that we can now draw one of the big clubs. I’m highly confident we can beat anybody. I have great belief in my team and their ability to grow stronger. They are getting better all the time and will be even better in the next round in February.

The one small fear over the next round is that Arsene’s touchline ban could be extended and we’ll find out today whether that’s going to happen or not. It’s odd that it’s taken this long, UEFA are usually quite quick to dish out their punishments. Perhaps they’re taking lessons from the FA.

Now though it’s time to put Europe behind us and concentrate on the league again. Chelsea are visitors on Sunday and that will obviously be the focus of the blog for the next couple of days. Already there are headlines about Lampard being ready to gun us down and such and they’ll get worse as the days go on. I promise not to make any horrible puns although if I think of one about Cuntley Cunt I’m going to have to use it. I’m sure you understand.

Right then. Let the countdown to Sunday begin.