09.05 – “I want to be part of the history of this club. I want to be remembered at Arsenal and give something for the club.”

It’s the news that we’ve all been waiting for. Since last summer we’ve waited for Patrick Vieira to state once and for all that he wanted to stay with Arsenal, and now he confirms he’s discussing a new contract. I’ve always said he needed to commit to a new deal, otherwise somebody at Arsenal would have had a very difficult decision to make as his current contract ran down. These days you can’t allow a player so valuable (on the pitch and in pure £££ terms) to let his contract run out.

I’m glad he realises what an honour it is to captain a club like Arsenal and I hope he realises how glad we are to have him as captain.

Sign on, sir…..sign on (any scousers please disregard this, signing day is Tuesday ‘la). 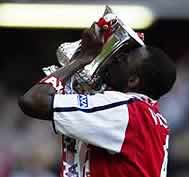 Thierry Henry says he’s ready to take on his share of responsibilty too, and he reckons the more experienced players at Arsenal will have to work hard to make up for the loss of Tony Adams. To get an idea of how the Arsenal players respect and enjoy working with Arsene Wenger, take a look at this article in the Telegraph by Lee Dixon, while there’s a more general article here with quotes from Vieira about Ferguson “I’m disappointed that someone like him [Ferguson] was talking like that”, and Gilberto Silva’s struggle with the cold weather.

Ahead of tomorrow’s Community Shield game against Liverpool, here’s the first in a series of a new Arseblog advertisements. Of course, the only place you’ll see them is on your own desktop, but it’s a start….