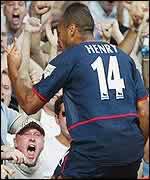 Excellent. It’s been a long time since I heard a player say something like that. Now all we have to do is get Tel steaming mad before every game and the league, the Champions League and the two cups are as good as won.

Myles Palmer reckons that was Thierry’s best ever goal. He’s scored some corkers before of course, but as he says I can’t ever remember him scoring when we were 2-0 down with so little time to go (Aston Villa at THOF last season maybe?)

I saw on Sky the ball travelled at over 70mph. On Soccer AM last week they had Alan Smith, Maccarone, Jenas and Niall Quinn trying to hit the ball as hard as they could and none of them reached 70mph. SUUUUUUUUUPER SHOOOOOOOOOT……

Reading the Sunday Times, the pro Man Utd Rob Hughes was highly critical of Arsenal’s performance against West Ham, choosing to highlight the fact we could have lost the game rather than giving us any credit for the way we came back. A more reasoned view appears from Soccernet’s ‘The Insider’.

Dennis Bergkamp is a doubt for tomorrow’s game against West Brom, he’s suffering from a calf injury picked up against Birmingham. Expect Gilberto to start in midfield with Paddy tomorrow night, Edu on the left while Super Sylvain should move up front alongside angry Thierry.

For those of you interested, ADSL is up and running again – now I just need to get my own computer fixed before the missus starts missing hers. And for any Mac users out there who are unable to get live radio comms from arsenal.com, the email address to write to is [email protected]. Be nice and maybe they might fix it for us…..