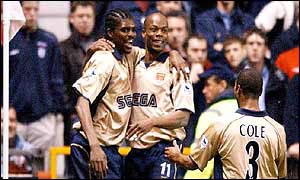 Sylvain Wiltord’s 56th minute goal ensures Arsenal’s second double in the last 4 years. It’s impossible to pick out a man of the match, because every single Arsenal player on that pitch played out of their skins.

United tried to break us with their football early on, they had loads of possession but we defended brilliantly.

They tried to wind us up with some pretty awful tackling, but that didn’t work. Then they tried to break us with top scorer Ruud Van Nistlerooy, but his most telling contribution was to punch Freddie Ljungberg in the stomach in an off the ball incident. The United players were too wound up and frustrated to play football tonight.

The last 20 minutes were the longest I can remember. If I lived in a cartoon world, the second hand on the clock would have gone backwards at some point.

Tonight is something special. Man Utd are a brilliant football team – they’ve proved that with their record in the league over the last 9 seasons. Winners 7 times, runners up twice. So, having finished second to them every year since 98, winning the league at Old Trafford almost makes up for it all.

I’ve never seen Arsene Wenger look so happy, dancing around with the players and applauding the supporters. Vieira kissed the badge (make of that what you will), Wiltord continued his crazy antics from last Saturday, and basically, everyone went fucking mental.

The Arsenal fans were going mad, singing, jumping, dancing and taunting the Man Utd fans who were leaving with 10 minutes to go. In a game when you’re 1-0 down and there’s still 10 minutes on the clock, why would you leave? But in fairness, Arsenal never looked like being beaten.

I’m going to get a beer. Enjoy your night Arsenal fans, it doesn’t get much better than this.

17.45 – ….and we’re back. Feeling as rough as a dog’s arse that’s been put through some kind of roughing-up device, though. The heavy workload that has restricted my sterling work here on Arseblog has lightened, and to celebrate, I thought a 9 hour drinking session would be a good idea. I was still convinced it was a good idea until I woke up on someone’s couch this morning with both my legs gone ‘dead’. The pins and needles were enough to make the most hardened terrorist confess anything that was asked of him. Now, my head hurts, along with my arms, my torso, my legs, my feet etc.

So, I’m gonna make some food, and try not to shit my pants during tonight’s game. If this doesn’t give me some kind of brain seizure, nothing will. Here’s to the lads, and let’s hope they can come back with at least a point tonight….