22.48 – There’s a brand new Freddie Ljungberg wallpaper in the ‘Other’ section above. It features his goal against Chelsea in the FA Cup final. Enjoy.

20.05 – Check out all the records we’ve accumulated this season on the way to the double. Impressive stuff.

I have to say fair play to Bobby Charlton, who stood and applauded Arsenal at the end of last night’s game. Normally I wouldn’t even mention something like this, but the fact that it was so obviously making him sick was really funny.

Sven Gordon Eriksson has named his squad for the World Cup, here. The 4 Arsenal representatives are David Seaman, Ashley Cole, Sol Campbell and Martin Keown. Jermaine Pennant and Stuart Taylor have also been called up for international duty in the European Under 21 championships.

Decision time for me now. When we lost against Newcastle in December, I grew a Robert Pires style stripe which I have maintained and cultivated until now. Now that we’ve won everything, I’m not sure whether to keep it or not. If I leave it on and go through the whole summer here in Spain, I will have a white stripe when I shave it off eventually. If I shave it now, it might drastically affect the fortunes of Arsenal football club. It’s kind of like a long distance, totally unplausable Samson’s hair situation.

We haven’t lost a game since I grew it, but it’s a pain to keep shaving around it. I’m kinda thinking of shaving it now, then growing it back in time for next season, but what if next time it doesn’t work? What if all the good luck in the world is in this stripe now? Life is hard sometimes, eh?

Remember, if you want to see that clip of Sky’s Tim Lovejoy saying ‘It’s only Ray Parlour’ in the FA Cup commentary, email [email protected]. See May 5th for more on this.

08.45 – Right, I’ve just finished sending emails to all the Utd fans I know and have had to work with over the last 4 years. They’ve spent that whole time being smug and rubbing my nose in it – fair play to them, coz I’m gonna do exactly the same to them for the next 12 months. 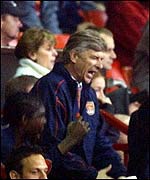 I just want to say a word or two about the boss. Quite rightly, everyone has praised the players for their performances over the course of the season, but take the following into account:

Only one player that was signed in the summer has made an impact on the team – Sol Campbell. The others have struggled a bit, so essentially we’ve done the Double with the same team that bottled it in big matches for the past 3 seasons.

Yes, they know each other better on the pitch, but it’s more than that. Arsene Wenger has filled them with confidence and belief this season. He’s instilled in them a desire not to finish second again. He said the right things at the right times. He’s coped with countless injuries and suspensions and the team spirit he’s created is unreal. I can remember watching the Wimbledon game in the 97-98 season and seeing the high-fives and back slapping after a 1-0 win, and it’s been the same this season.

A R S E B L O G would like to thank Arsene Wenger, Pat Rice and all the backroom staff for theircontribution to this remarkable season. I’d like to thank my wife…..*sniff*……my child….*sob*…..all my friends……*weep*….and most of all…..*bawl*….God. That’s my Tom Hanks style Oscar thank you speech.

Ooooooh, Arsene Wenger’s magic, he wears a magic hat, and when he saw the Double, he said ‘I’m having that’….ooooooooooooooooh (repeat to fade).