Another North London derby win left us with plenty to talk about. There’s the way Arsenal dominated the first half, taking advantage of Tottenham’s passivity out of possession to play out from the back calmly and pin Spurs back. Gabriel and Saliba could carry the ball out against an isolated Harry Kane.

Spurs were stretched, with Odegaard and Xhaka again playing outside and behind the Tottenham midfielders, dragging players out of the back five to deal with them and creating space for Bukayo Saka to go after Ryan Sessegnon one-on-one. Defensively, Arsenal tucked Saka in deeper than usual, tracking Sessegnon, allowing Ben White to get tight to Son Heung-min. There was also the superb performance of Aaron Ramsdale.

But one particular element of Arsenal’s approach in the final third on Sunday really struck me. And it’s because of something we did, and something Martin Odegaard said, back in October.

“It was a great goal. We knew before the game he was going to be free in those areas and we practised that a lot, to find him in those areas, and he made a great shot,” the skipper said after Thomas Partey opened the scoring in the 3-1 win.

Anyone fancy a game of spot the difference? 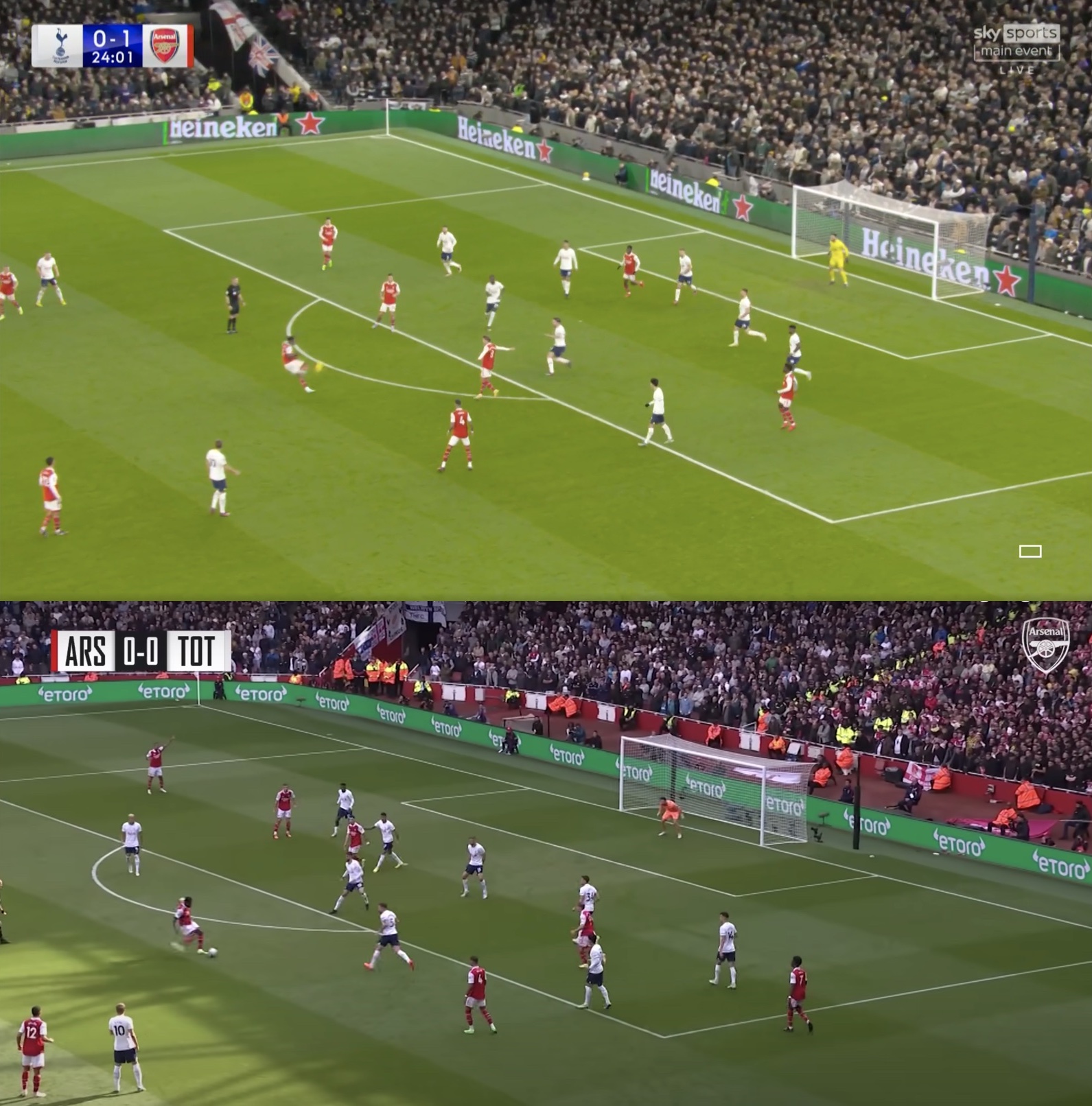 Partey’s shot that hit the post on Sunday was just a few yards away from where he scored from back in October. The White-Ødegaard-Saka triangle is there again, with White goalside of Son. William Saliba is marking Harry Kane in case of a possible breakaway. And there are 8-9 Tottenham players within the last 20 yards of the pitch but none of them close enough to challenge Partey, block a potential shot, or put any pressure on the ball.

We knew it then and we knew it again this time around. Tottenham collapse when the ball goes out wide and their box is threatened. Mikel Arteta knows it and he has made sure his players know it too. Arsenal have taken 17 of their 36 shots across this season’s north London derbies from outside the area. That’s 47.2% of the team’s shots in those games.

Now, Arsenal aren’t shot shy from range. The team have taken 88 shots from outside the box this season, the fourth most in the league. but zoom out and you will see 31% of Arsenal’s shots this season from outside the area, pretty close to the league average. Only Liverpool and Brentford take their shots from closer to goal on average, and that’s with both clubs having a much higher proportion of headed attempts than Mikel Arteta’s side.

Tottenham’s defensive strategy when in their own third is to force the opposition to take poor shots, nothing too close to the goal. They pack the box and allow efforts from range; a league-high 44% of shots Tottenham have faced have come from outside the area so far this season. But Arsenal, instead of trying to walk the ball in, as the famous accusation traditionally goes, have leant into where the space is against their local rivals and it has worked.

It paid off for Partey in October and for Odegaard this time around. And it’s a solid plan, the space was consistently there against Antonio Conte’s side. If a ball is fumbled clear and bounces out into prime real estate — central, just inside or right on the edge of the box, it is only going to fall to a red shirt here … 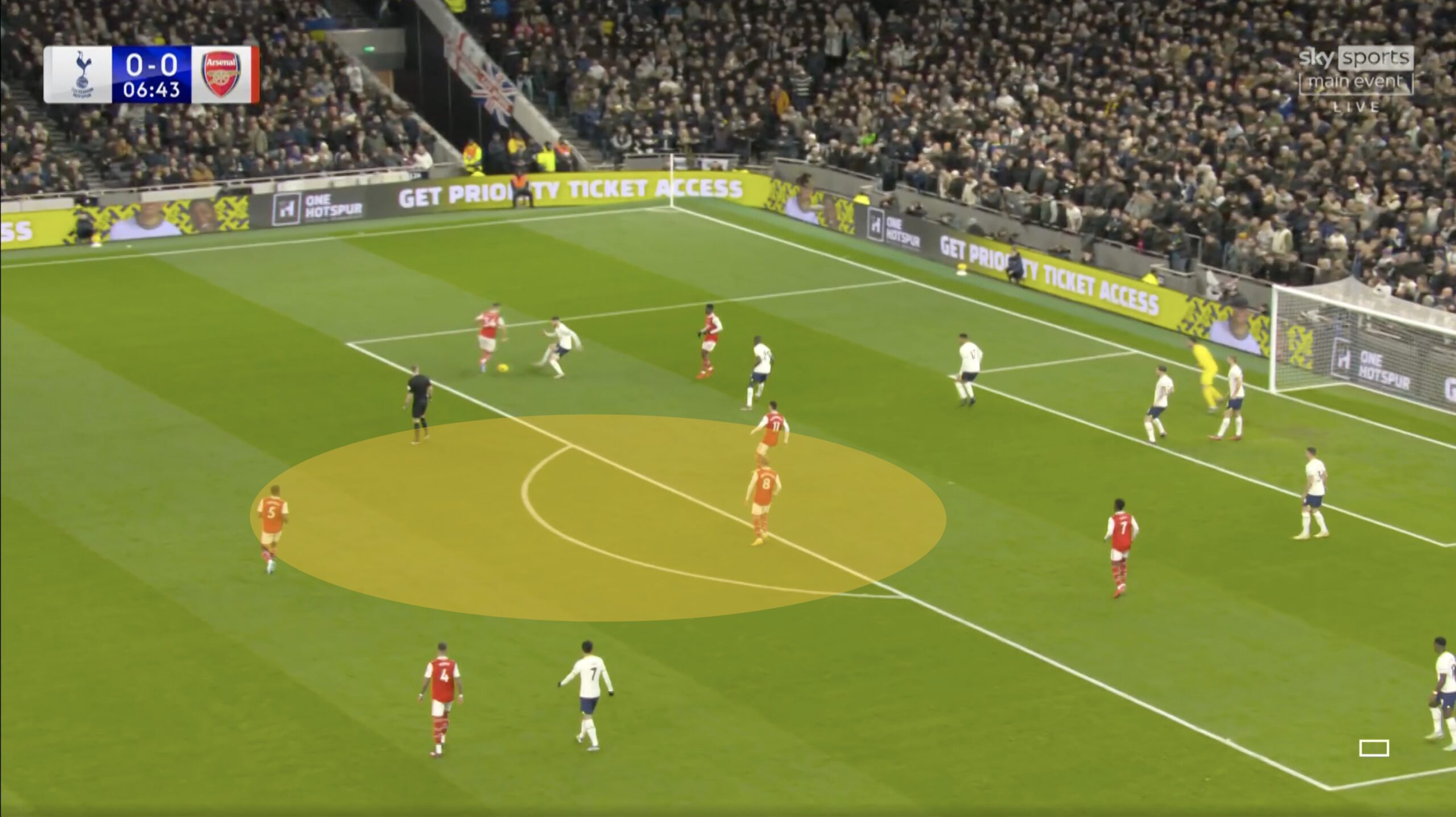 The same is true of the first goal, where the Tottenham defenders outnumber the red shirts and cover the whole box to begin with … 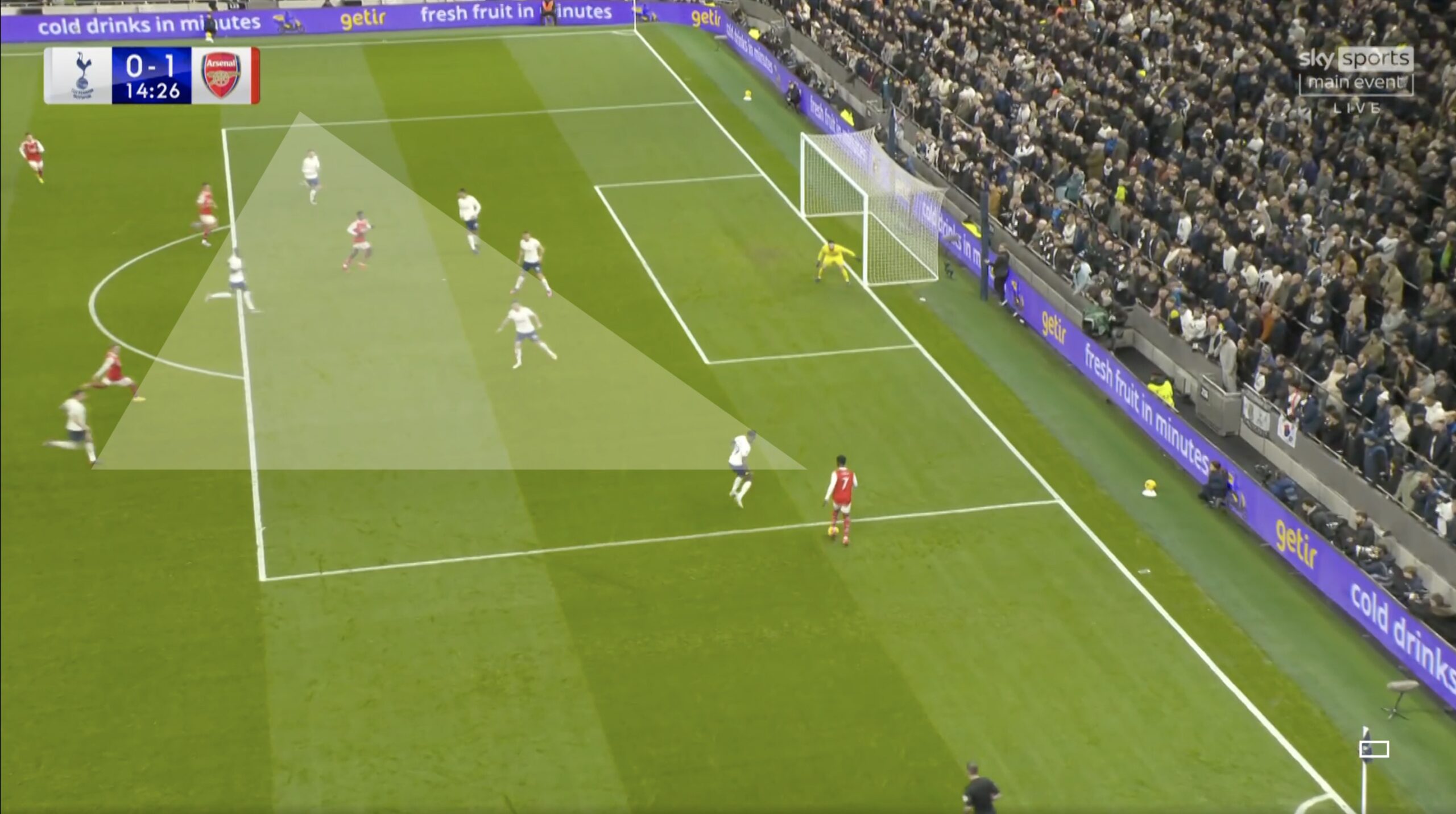 … only to collapse and end up in a position where a deflection or subpar clearance would land with an Arsenal player with time to get a strike away. 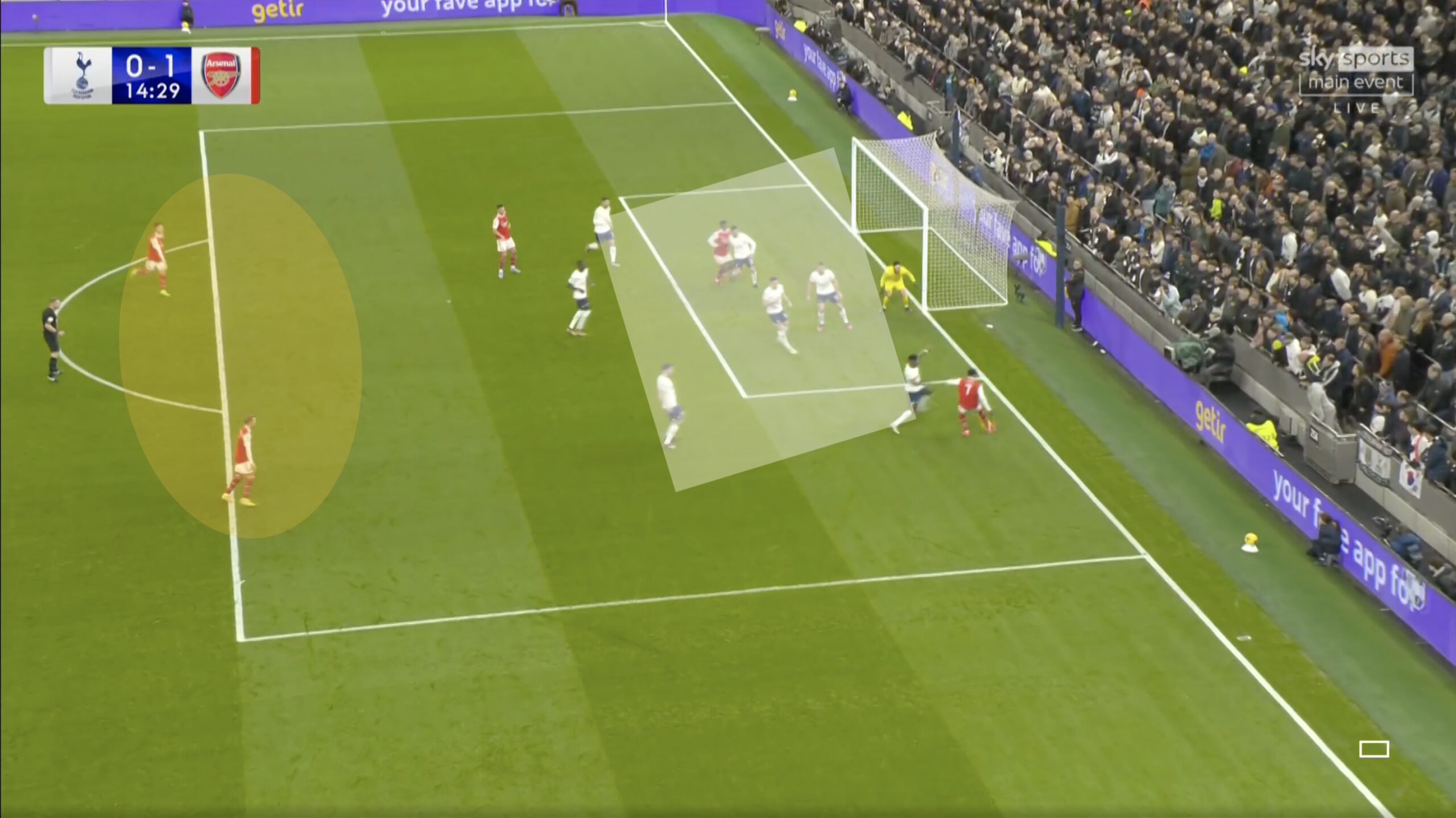 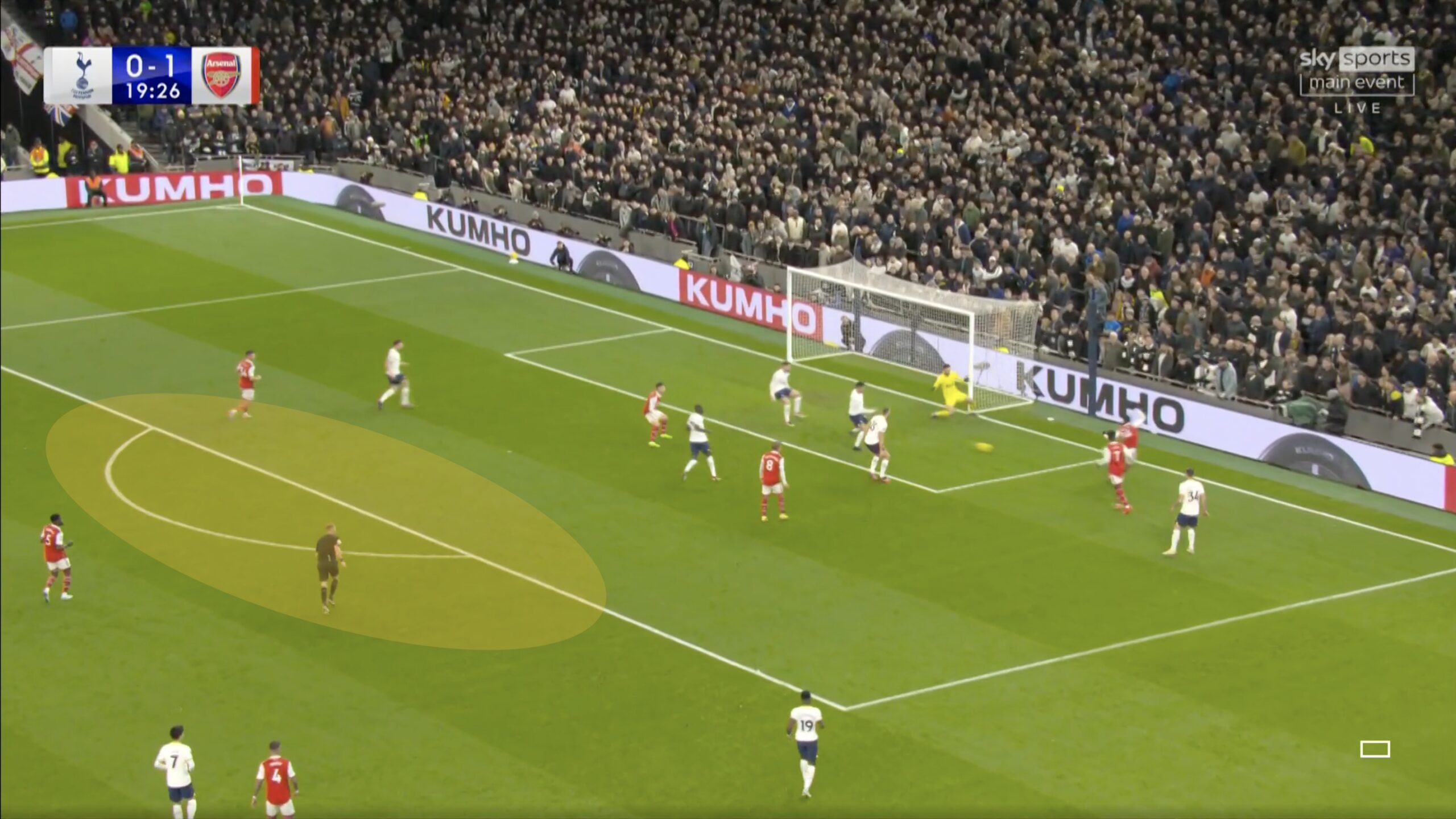 History repeated as Partey hit the post with that crunching effort just five minutes after that, and the same space had appeared again on the break a few minutes earlier. As Arsenal move forward, they are outnumbered again and there is no easy ball, with Son covering Odegaard in the middle … 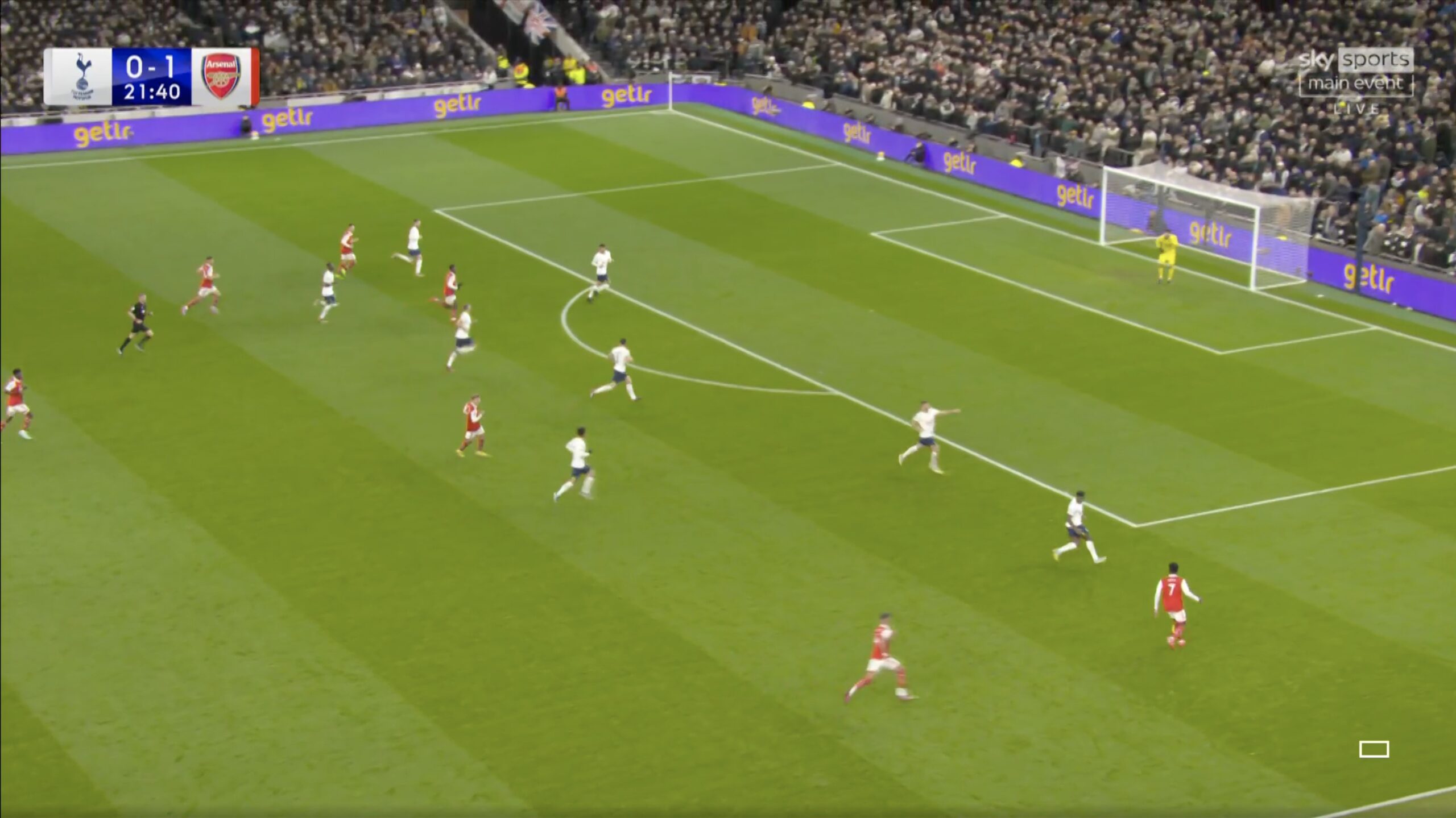 … but Son is dragged to the ball as Ben White overlaps and the defenders do not want to be left one-on-one against Saka, opening up yards and yards ahead of Odegaard as Saka pulls the ball back to him … 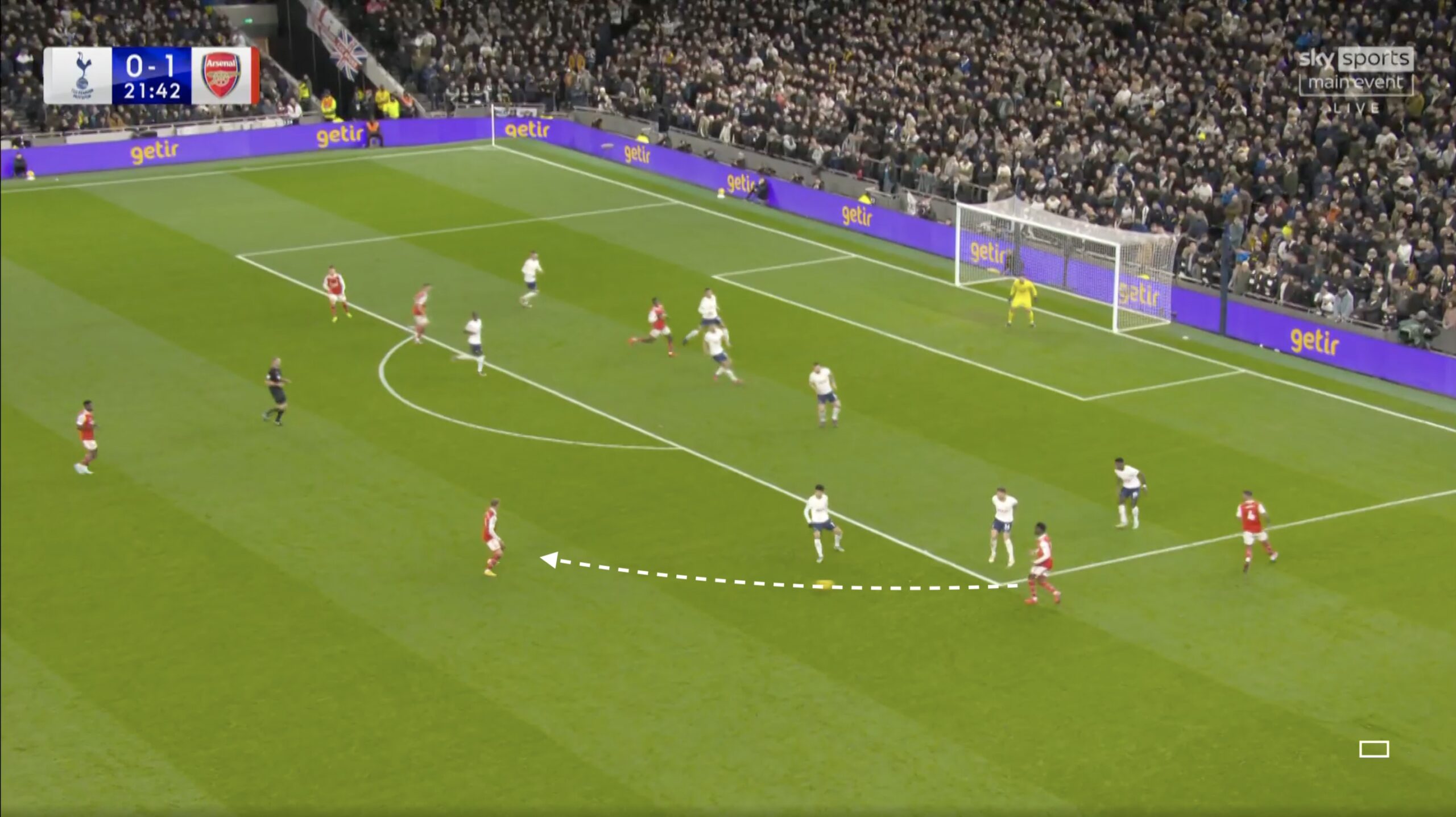 … on that occasion a fine effort was denied by Lloris but it was another move similar to the plans of the first derby of the season. The ball is pullled back to the same area scored from in the first half in October and the space is created by the same overlapping runs from Ben white that saw Arsenal create the chance Gabriel Jesus scored from that day.

And it did not matter that Lloris saved this effort, because Odegaard just used it as a sighter.

The next time the captain found himself in a similar position he found the net, with self-styled hardman centre-back Cristian Romero making no effort to close him down and right-back Matt Doherty tracking a Gabriel Martinelli run so well that he continued to track it after Martinelli had stopped running. 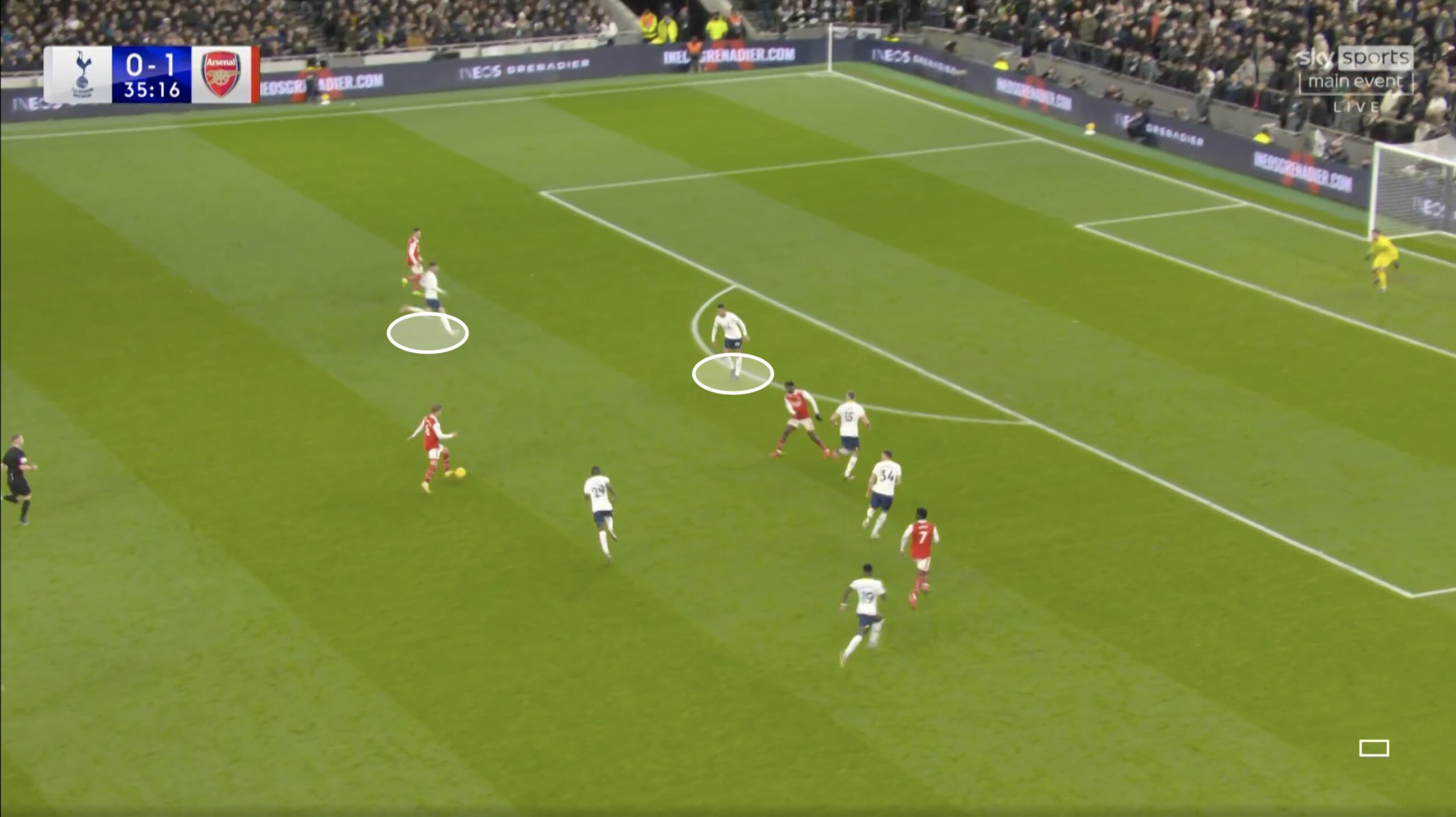 Doherty comes inside to stop a through-ball to Martinelli but the Brazilian has already pulled wide anyway and the defender just keeps moving deeper. Between him and Romero, they’ve taken the option for a ball in behind away but Odegaard has carried the ball five yards unopposed to get into shooting range and the defenders ahead of him have done nothing to make the shot more difficult. 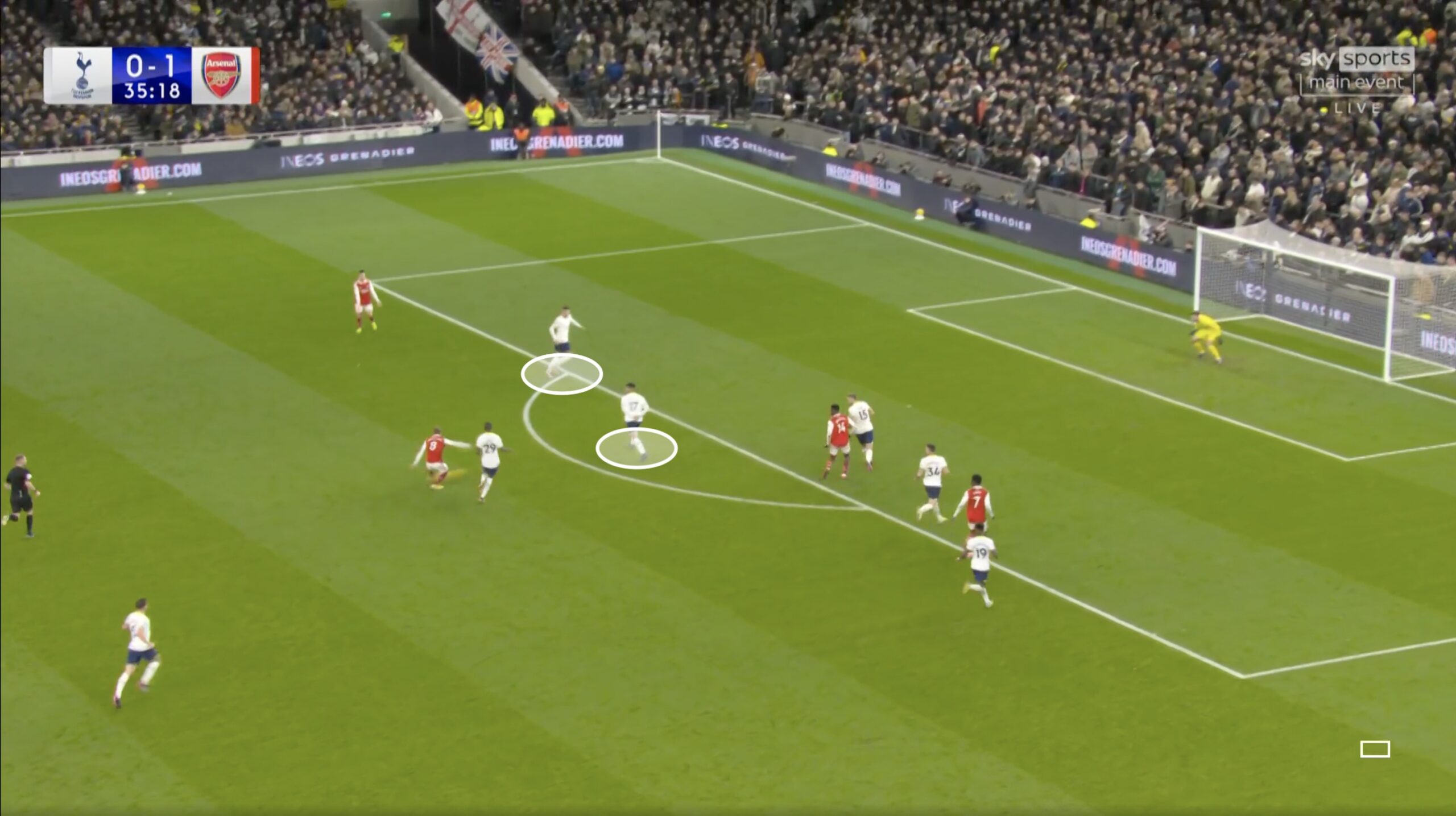 With a deserved second goal, Arsenal were well on their way to a first north London derby double since 2014.

It does, of course, take quality to score from distance, but that doesn’t mean generating those opportunities cannot or is not part of a well thought-out plan. Arsenal had dominated possession and territory against Newcastle in their last league game as well but didn’t find the back of the net. Six of 17 shots that day came from outside the area but just three of those came before the 84th minute.

Finding ways to break down a stubborn defence often includes trying to drag them out of position by letting them know you are willing to shoot and capable of scoring from distance. When Tottenham are in their own third, they collapse as deep as possible to protect the box.

Arsenal knew that they would find joy in these areas against Tottenham back in October and, more than three months on, their north London rivals have done nothing to fix it.