If you’ve read this blog for any period of time, you will know that Cristiano Ronaldo is far from my favourite player. That has been true for a long time, and when you consider some of the company he keeps these days, it’s even more so.

So, when he did a Harry Kane last night during Portugal’s 2-0 win over Uruguay, I wasn’t even slightly surprised. Running away to claim a goal when he didn’t touch the ball is just typical. I guess some would say that’s what people who are obsessed with goals do, they will take any chance to add to their tally, but replays showed he didn’t make any contact at all and he still ran off celebrating like he did.

I suppose in the grand scheme of things it’s hardly the biggest issue the world faces today. There are obviously very many more important things. But still, what a spoofer. What makes it worse though is that the goal then went to Bruno Fernandes, a man whose face is so irritating it should come with a government health warning.

As for Portugal’s second goal, that was a ridiculous penalty to get. We’ve spoken a lot about offside during this tournament, but surely the handball rule needs some work too. Where is the man supposed to put his hands when he’s sliding in to try and block a shot? It’s not like he’s throwing himself at it fists first like an Olympic diver.

That is NOT a penalty and is literally in the IFAB directory of what ISN'T a penalty.

It can only be a penalty if it's a deliberate act.

This image is from the IFAB. pic.twitter.com/LSGTzkinzq

It came after Uruguay had thrown on Luis Suarez to add some bite to their attack, and they had a period when they put Portugal under some pressure. They hit the post with the keeper beaten, and Suarez couldn’t get his foot around the ball enough to fire in at the near post after the ball broke kindly. So, to get done with that kind of penalty decision must be frustrating.

There was also a brief interruption – not that we were allowed see it on TV – from a protester who wore a t-shirt with ‘Save Ukraine’ on the front, and ‘Respect Iranian Women on the back’, while holding a rainbow flag. Even in the middle of the football itself, you’re never too far away from off-field issues. I wonder how that guy is this morning. 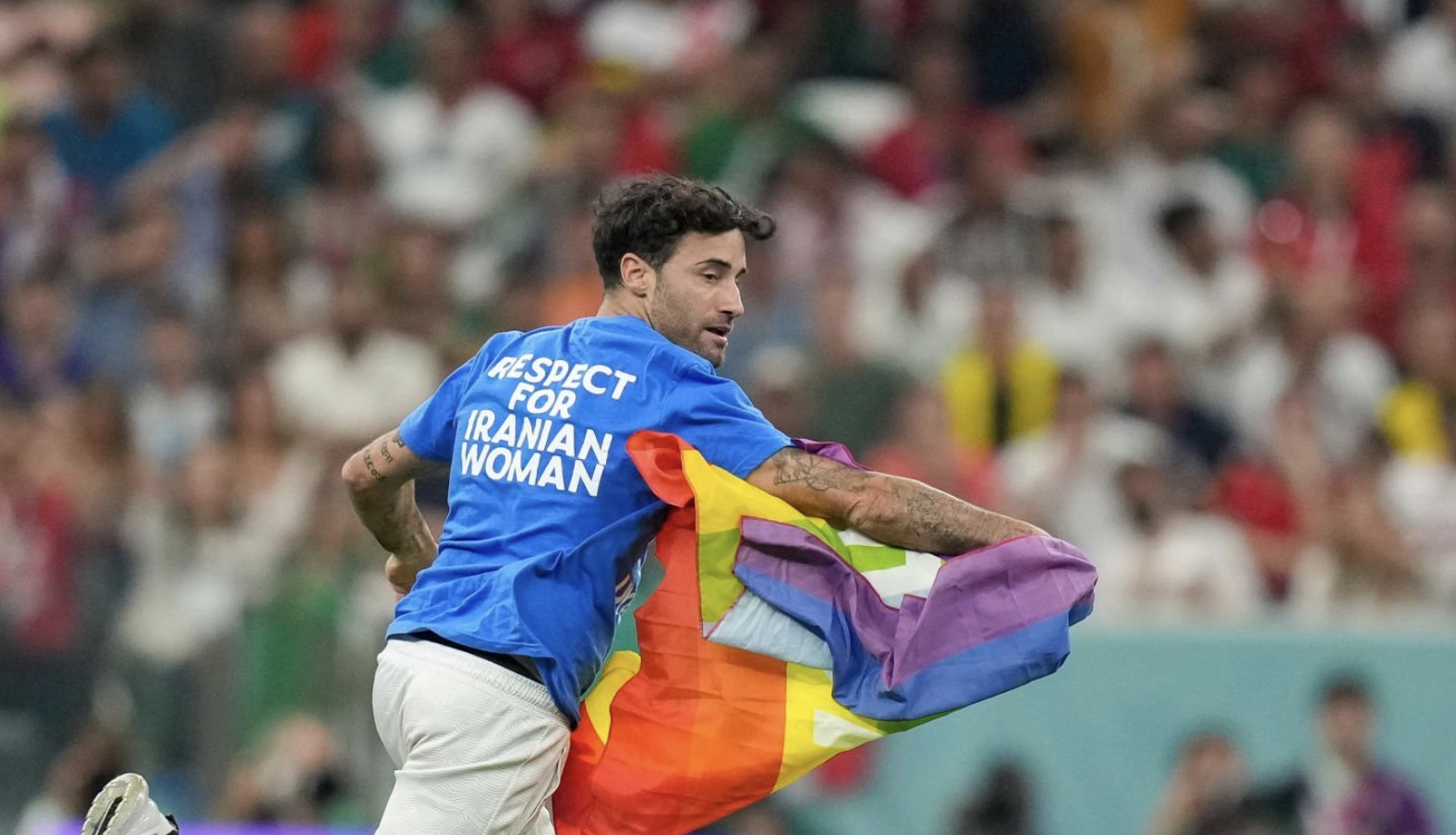 I enjoyed this analysis from Uruguayan outlet ‘El Observador’ (not sure that means in English). ‘Uruguay in a state of regression: Primitive football played by drowning.

‘Diego Alonso [manager] … he put on the suit of caution …’, while Edinson Cavani was one of the few Uruguay players to speak afterwards, to briefly say, “Ask Alonso about the plan, he can explain it to you.”

I like the idea of the suit of caution. I guess football managers wear this in their motorcars of cowardice in which, of course, the handbrake is always on.

Uruguay can still qualify, but Ghana’s 3-2 win over South Korea puts them in a strong position when the two teams meet in the final game. It was a very entertaining win for Thomas Partey’s side, 2-0 up, then pegged back to 2-2 with a couple of really good headers, only for the impressive Mohammed Kudus to grab the winner. He’s been one of the stand-out players at this tournament for me.

Granit Xhaka’s Switzerland were beaten 1-0 by Brazil, who probably deserved to edge it. The Swiss were really well organised, and obviously had a plan to make life tough for the opposition, but a very aesthetically pleasing winning goal which skimmed off a defender’s arse was enough for all three points. The other game yesterday was the entertaining 3-3 between Serbia and Cameroon, who had pre-game goalkeeper drama to add to the occasion.

Today, groups get decided. We know hosts Qatar are out, so we’ll see who of the Netherlands, Senegal and Ecudor go through later. The Dutch play Qatar so it’s likely a straight shoot-out between the other two. The evening games look a bit tastier with Wales taking on England, and the USA facing Iran. There’s plenty to do on the pitch, and some interesting sidebars off it.

I saw reports that Ben White missed England training through illness. Having had sunstroke once before, during which I hallucinated a plethora of David Bowies dancing through my hotel room, I wish him all the best.

For more on the World Cup, join myself and Dan from @HLTCO on Patreon a bit later this morning for one of our crossover podcasts, more here tomorrow.