Morning. Welcome to a brand new week, and the final round of international games take place today and tomorrow. After that, Mikel Arteta will welcome his travelling players home, see who hasn’t been injured, and then make his plans for the derby.

Kieran Tierney won’t play for Scotland against Ukraine tomorrow, this despite the fact Steve Clarke said he was ‘ok’ after a clash of heads at the weekend. Whether that was just a case of a manager giving nothing away, or Tierney being less ok than he thought, I have no idea. Hopefully it’s just a case that common sense has prevailed, and he’ll be fine for the weekend.

Players of note in action over the next couple of days:

Bukayo Saka: He’ll probably be involved as England face Germany this evening, but with pressure on Gareth Southgate after losing to Italy, he may fiddle with his team and play a 9-0-1 formation.

Beyond that, we already know Thomas Partey won’t play for Ghana, while Takehiro Tomiyasu was withdrawn from the Japan squad. A statement from the Japan FA (via Google Translate), said:

We would like to inform you that defender TOMIYASU Takehiro (Arsenal) will be withdrawing from the SAMURAI BLUE ahead of the KIRIN CHALLENGE CUP 2022 Ecuador National Team match on September 27th due to club circumstances.

I don’t know what ‘club circumstances’ means, but perhaps there was an agreement that he’d play one game for Japan during this break – although I do feel like that’s unlikely. That said, with the World Cup imminent, there could be more cooperation between national set-ups and club sides, to ensure that key players aren’t missing for the tournament. If Tomiyasu arrived with advice from us that he wasn’t quite ready for 2 x 90 minutes in the space of three or four days, maybe that was taken on board. Japan need him for the World Cup much more than they need him for a relatively meaningless game against Ecuador.

Anyway, we’ll see how it all pans out. Going back to Tierney and Zinchenko, I think it’s great that we have two left-backs with such quality. They are obviously quite different in terms of what they bring to the side: KT is a better all-round defender, Zinchenko is technically better and is more comfortable in those central areas, but as a pair it’s as solid as I can remember for this position in some time.

The discussions are always interesting when a new player comes in and does well. I remember a certain point last season when Nuno Tavares deputised well for Tierney, and we had a litany of questions for the Arsecast Extra about whether the Scotland man’s Arsenal race was run. Those turned out to be somewhat premature in the end, although Nuno is doing well in Marseille as a wing-back, not a full-back.

It’s been similar this season too. Zinchenko is lovely to watch, and was so impressive in the opening weeks of the season. And when he picked up a knock, how nice was it to be able to have such a solid option take his place? We’ve all had some concerns about Tierney’s injury record at Arsenal, and in truth it has been a feature of his career, as the graphic below illustrates: 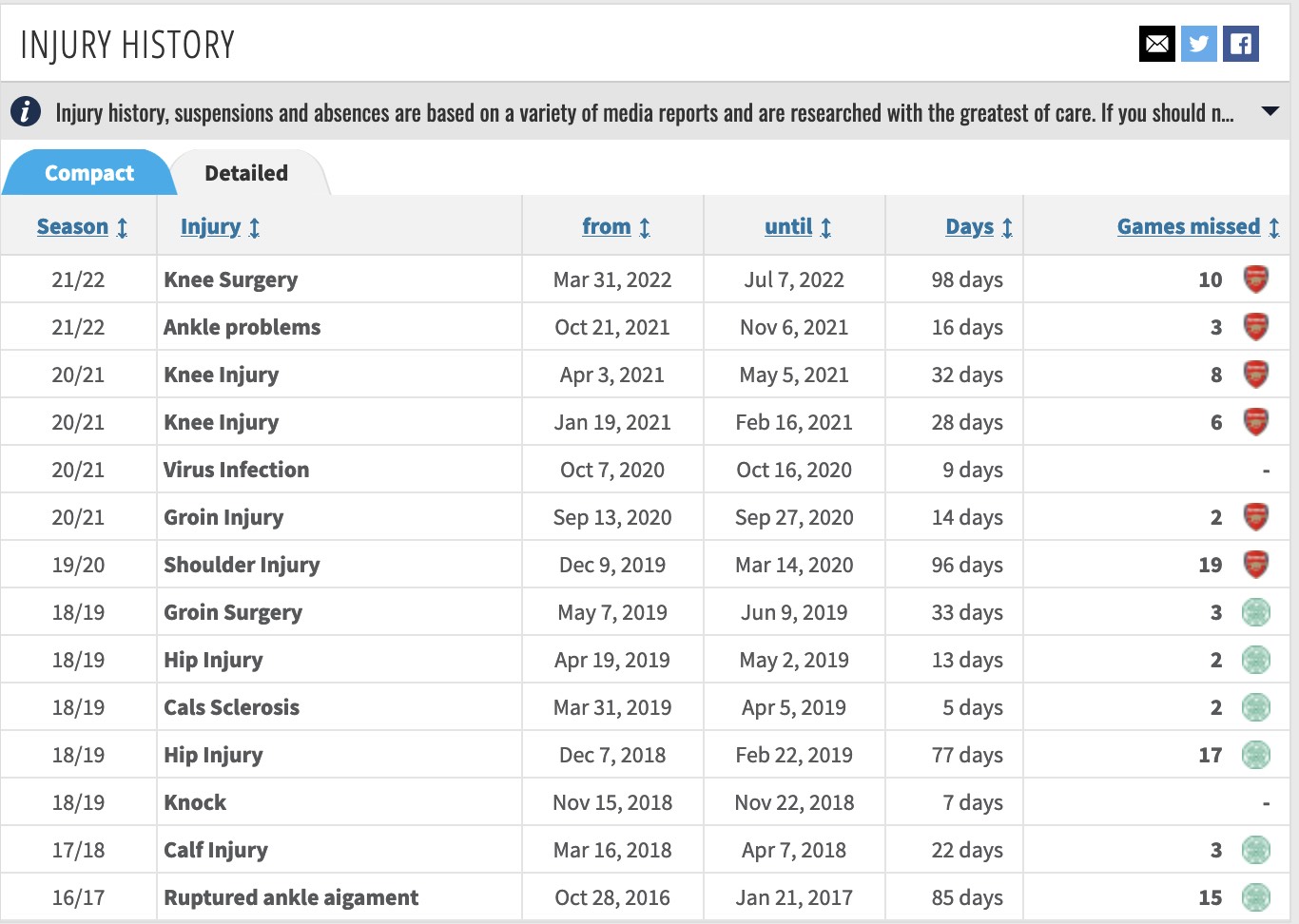 Those stats are from Transfermarkt, btw, and Zinchenko has quite a history too. 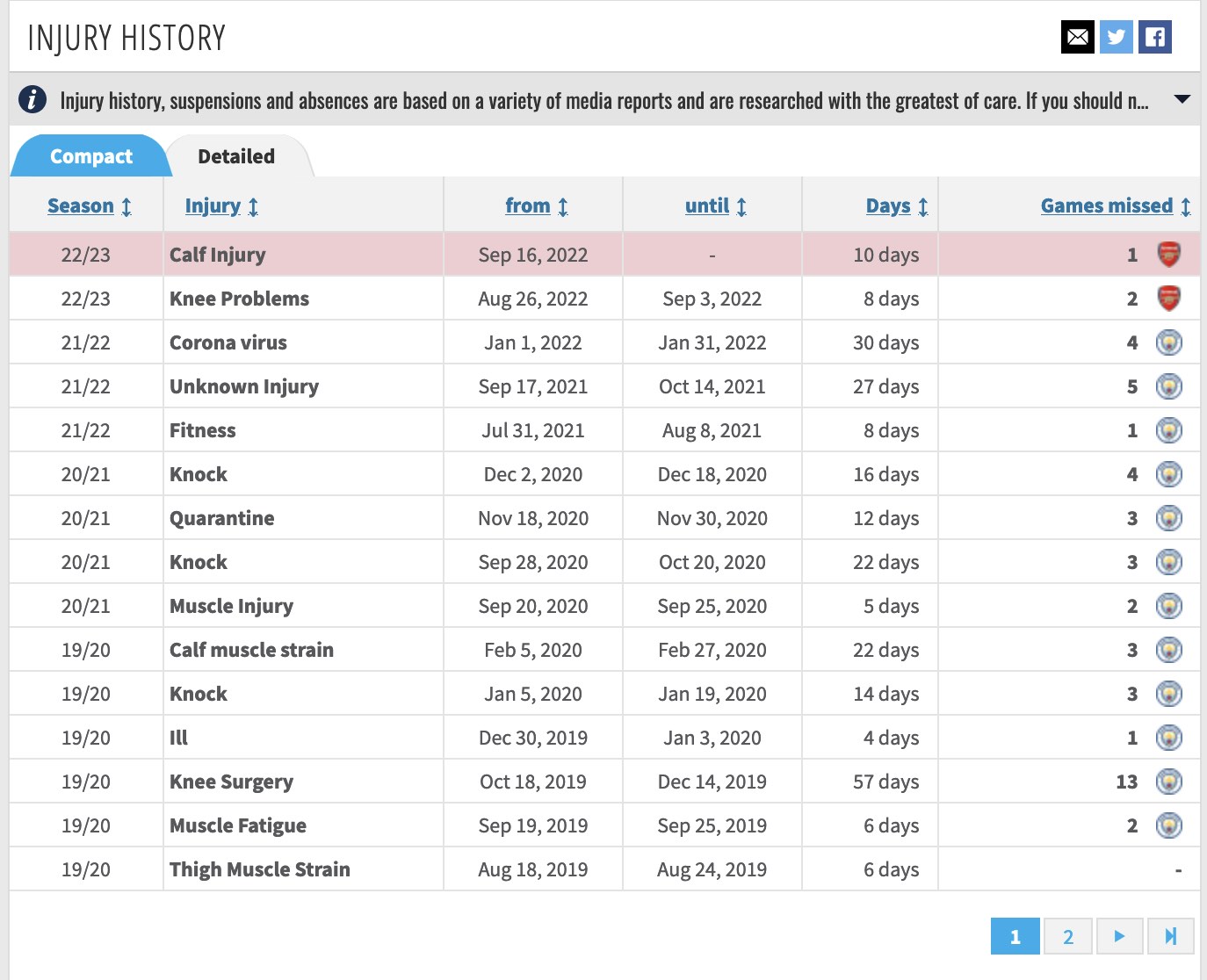 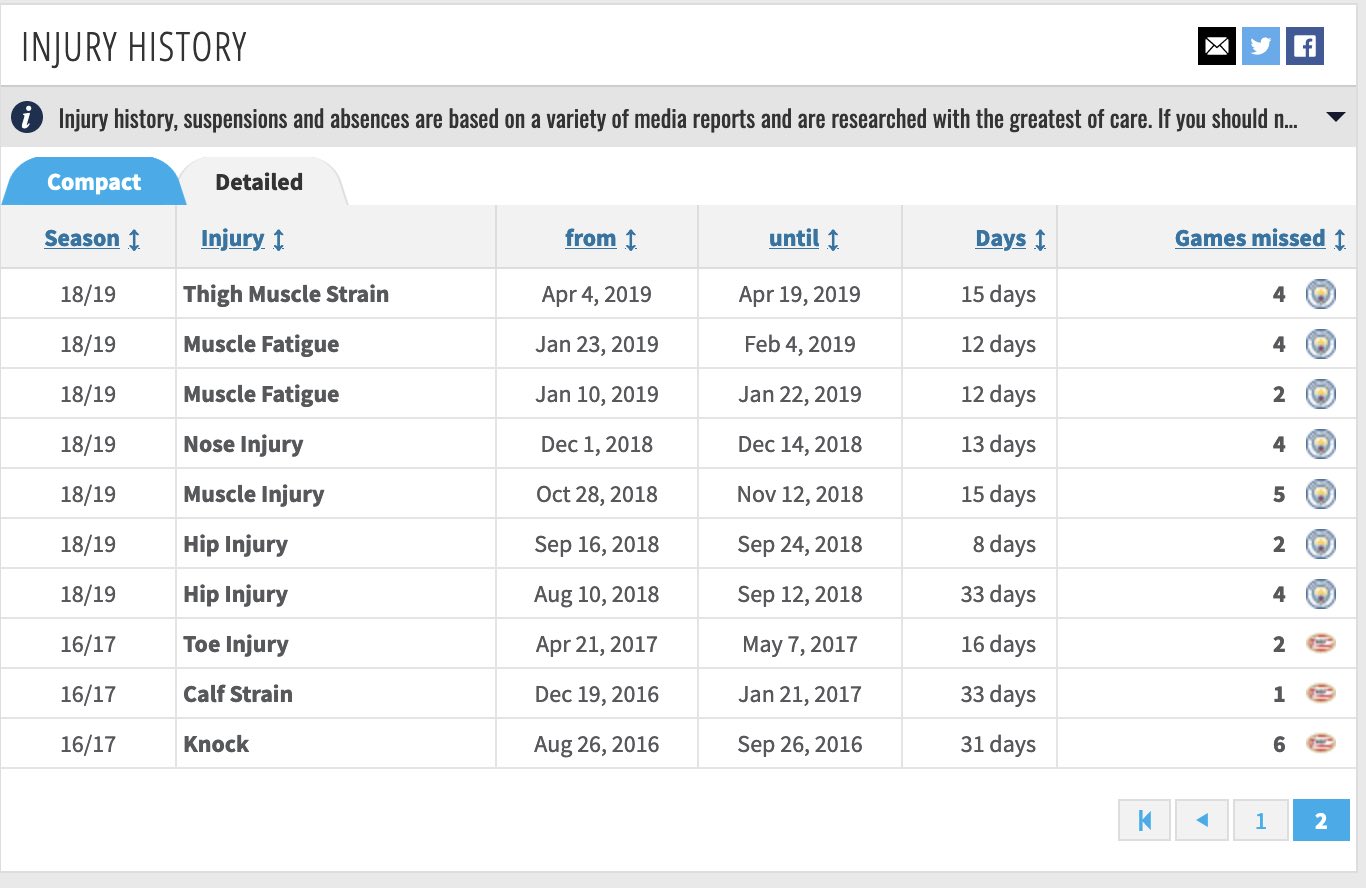 Apart from one knee operation in 2019, there’s nothing serious, but there are lots of little aches/niggles. And when you look at this season so far, it’s quite interesting to note the minutes both of them have played.

I know the sample size is quite small, but if the Arsenal left-back position was essentially a timeshare situation throughout this season I wouldn’t be at all surprised. Which isn’t to say that’s necessarily a negative thing. One of the benefits of having depth is that you have confidence in both players, so rather than playing someone who might be in that red zone or struggling with a knock, you can choose the other guy and thus avoid exacerbating any injury issues they might have.

Another one that will play out over time, and it might be a case that one of them is the clear leader in terms of minutes, but I suspect the benefit of having two players of such quality is that they’ll come out pretty even in the end.

Right, that’s your lot. James and I will be recording the Arsecast Extra late this afternoon. Keep an eye out for the call for questions on Twitter @gunnerblog and @arseblog on Twitter with the hashtag #arsecastextra – or if you’re on Arseblog Member on Patreon, leave your question in the #arsecast-extra-questions channel on our Discord server.

We’ll have the pod for you sometime in the early evening. For now, take it easy.