Morning all, a quick Wednesday round-up for you.

Arsenal travel to Switzerland today ahead of our first Europa League group stage game against FC Zurich. The match itself is taking place in St. Gallen due to an athletics event at Stadion Letzigrund, so that’s a little bit odd, but then this is the Europa League.

Mikel Arteta will meet the press a bit later on, and there’ll be some focus on rotation, giving ‘fringe’ players minutes, and ensuring he keeps his squad fresh for the weekend visit of Everton in the Premier League. I’m curious to know what the situation is with Emile Smith Rowe who reportedly pulled up during the warm down after the 3-1 defeat at Old Trafford on Sunday.

He has played just 47 minutes this season, across four substitute appearances of 6, 16, 9 and 16 minutes respectively. Some of that is because the team has been playing well, and it’s hard to break into a winning side, but I thought Mikel Arteta’s response a couple of weeks ago was quite interesting when asked what the 22 year old needed to do to get his starting place back . He said:

“He needs to stay fit, train well, and perform at the level he is able to perform because when he does that, it is really difficult not to pick him.”

It’s hard not worry a little bit. The last time he played the full 90 minutes was in April, during the defeat to Crystal Palace, and you have to go back to around this time last year – through to around the busy Christmas period – for his last sustained run of starts/full games (click to embiggen). 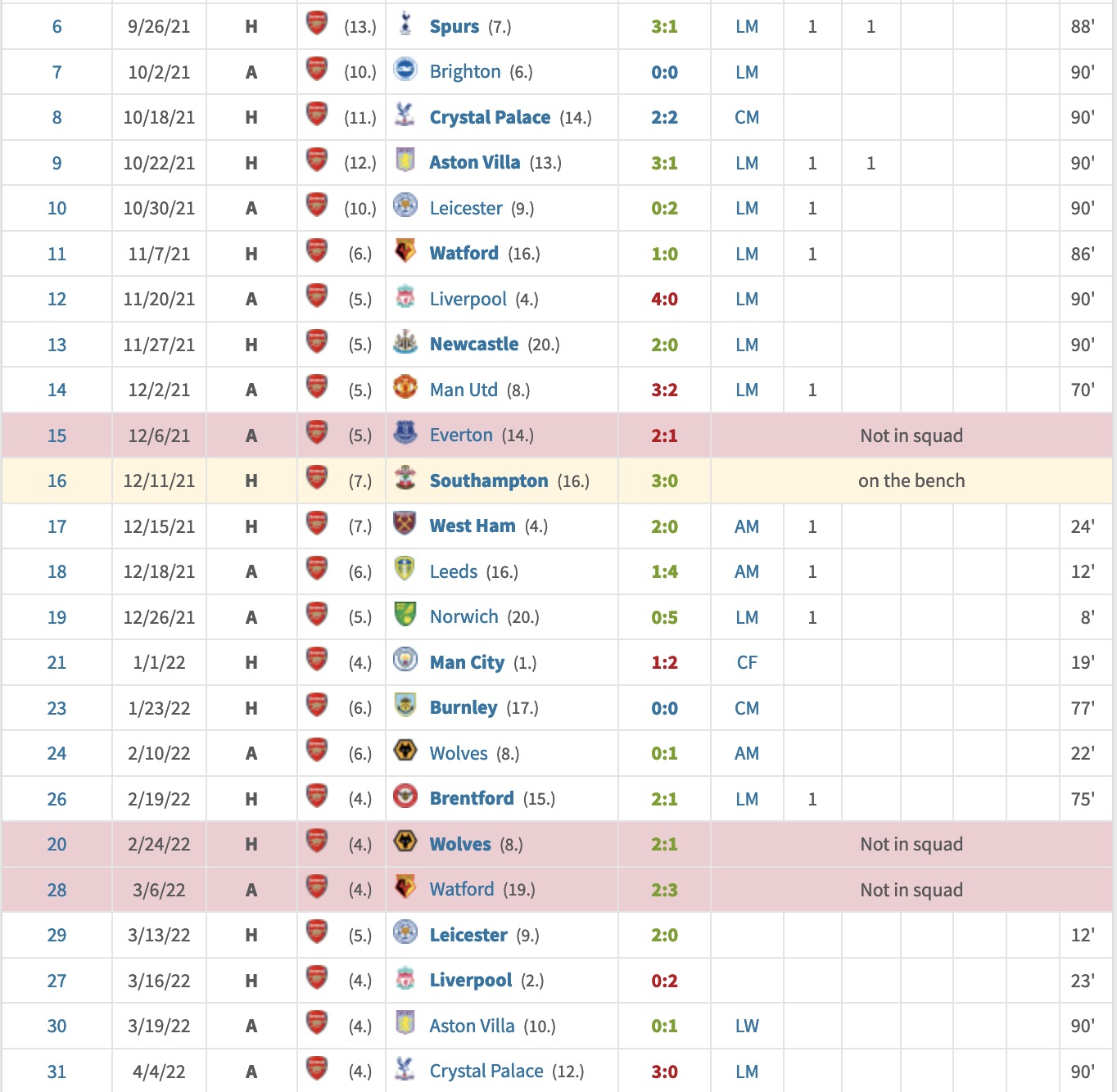 The thing is, it’s not as if he’s been completely sidelined though. He played in 12 of our last 13 fixtures last season, starting in 6 of them, and was an unused sub on the final day against Everton. Still, you felt like after so much football in the previous 18 months, he could have used a summer off. Instead, he was called up for England U21 duty, starting three games in 10 days.

Consequently, he didn’t feature a great deal in pre-season and this new issue, whatever it might be, is badly timed. He would surely have started against FC Zurich tomorrow night, and as much as I love what Gabriel Martinelli is doing this season, we need that competition and depth that Smith Rowe provides. Especially as our pursuit of another wide player this summer ended when we suffered those midfield injuries and then failed to bring in someone in that position either. Let’s hope it’s just short term, because Smith Rowe is a player of such talent and potential, but that falls by the wayside a bit if you can’t stay fit and available.

Speaking of fitness, there are some suggestions Thomas Partey will be back for the Everton at the weekend, but I’m not going to hold my breath on that one. Previous experience tells us that when you hear the words ‘Partey’ and ‘thigh’ together, chances are the time frame is going to be longer than just a couple of weeks.

Arsenal will also be keeping a close eye on the upcoming international break towards the end of the month, and Partey has been named in the Ghana squad for internationals against Brazil and Nicaragua. Perhaps an opportunity for him to build up his fitness, but also a potential injury banana skin for a player whose fitness has been a real issue since his arrival from Atletico Madrid.

Travel + an international coach prioritising his needs ahead of the November World Cup could potentially equal something problematic. At the same time, with that tournament looming, you could argue ensuring the availability of a key player would be an important consideration for that coach, so you could hope for a common sense approach. One to keep an eye on.

We’ll have updates on Arseblog News from the manager’s press conference which is scheduled for later on this evening after the team arrive in Switzerland. Let’s see what kind of injury updates we get from Mikel Arteta who, as we know, often likes to play those cards very close to his chest.

Finally for today, thank you to everyone who got in touch re Lana’s recovery etc. I’m happy to report that the surgery went well, there were no complications with the operation or anesthesia, and all going well we can pick her up and bring her home on Thursday and start the recovery proper from there.

Right, that’s it for this morning. Have a good one.

Previous articleJesus: Thou shalt kill
Next articleIt’s Going To Be A Big Europa League For…