Boy oh boy, this team makes me smile and feel happy. Three more points to continue this fine start to the season, and Bournemouth were blown away early like they were a pile of leaves and we were the greatest leaf blower the world has ever seen.

I don’t know what to say about that first goal other than Gabriel Jesus is an extraordinary footballer and I am so glad he plays for us. If I was that Bournemouth centre-half – the one he bodied out of the way to then kill the football that dropped from 10,000 feet – I’d probably just retire now. That’s it. Game over. I have to find a different career.

I suppose you could almost say the same for all the defenders who tried to get near him but couldn’t, before he laid the ball off to Gabriel Martinelli. Martin Odegaard was in the middle gesturing for a cut-back, but in that position you know a forward with goals in his last two games is going to shoot. The keeper made a save but the skipper adjusted his feet as quick as anything and made it 1-0.

Arsenal were on top, and doubled the lead shortly afterwards. Ben White brought the ball forward then overlapped, Bukayo Saka found him, he cut it into the box where Jesus took a touch which set it up perfectly for Odegaard to lash into the net. Honestly, I think the Brazilian celebrated more effusively than the goal scorer himself, but that tells you plenty about who he is.

Scott Cardigan could only look on in despair from the sideline, wondering if he could add a few more go-faster stripes to his arm.

The first half was, literally, all Arsenal. Bournemouth couldn’t do anything to threaten, and although the game settled down a bit and we weren’t quite as dangerous as we had been, the Arsenal fans kept themselves amused by singing the new William Saliba song over and over and over again, like a bunch of Paddies.

I have to say, the Arsenal songbook has been completely refreshed of late and it’s fantastic. Even Granit Xhaka got a song, six years into his career here, and the away fans were in incredible voice. Some might scoff, but it really does speak to the connection between the supporters and the team right now. You don’t sing songs for twats you’d like to shoot out of a cannon into the side of a tall building.

Bournemouth made some changes at half-time and they were more in the game after that. They still didn’t do a great deal, but I have to give some props to Gabriel at the back who just dealt with anything they chucked into the box towards the gigantic striker lad they had up top. I know there’s another centre-half who will get a mention in a moment, but the big Brazilian should get his too.

Anyway, let’s get onto Saliba. Arsenal won a free kick out on the right, it was sent in by Martinelli whose set-piece delivery is really very good now, and the ball came to Granit Xhaka. He laid it back to Saliba who guided the ball into the top corner with his left foot, and what a way to score your first Arsenal goal.

What happened next was just fantastic. Obviously the man who scored the goal got congratulations and many slaps to the head because a good head slapping is the reward from your teammates for finding the back of the net. Oleksandr Zinchenko’s reaction was hilarious:

While on the sideline: 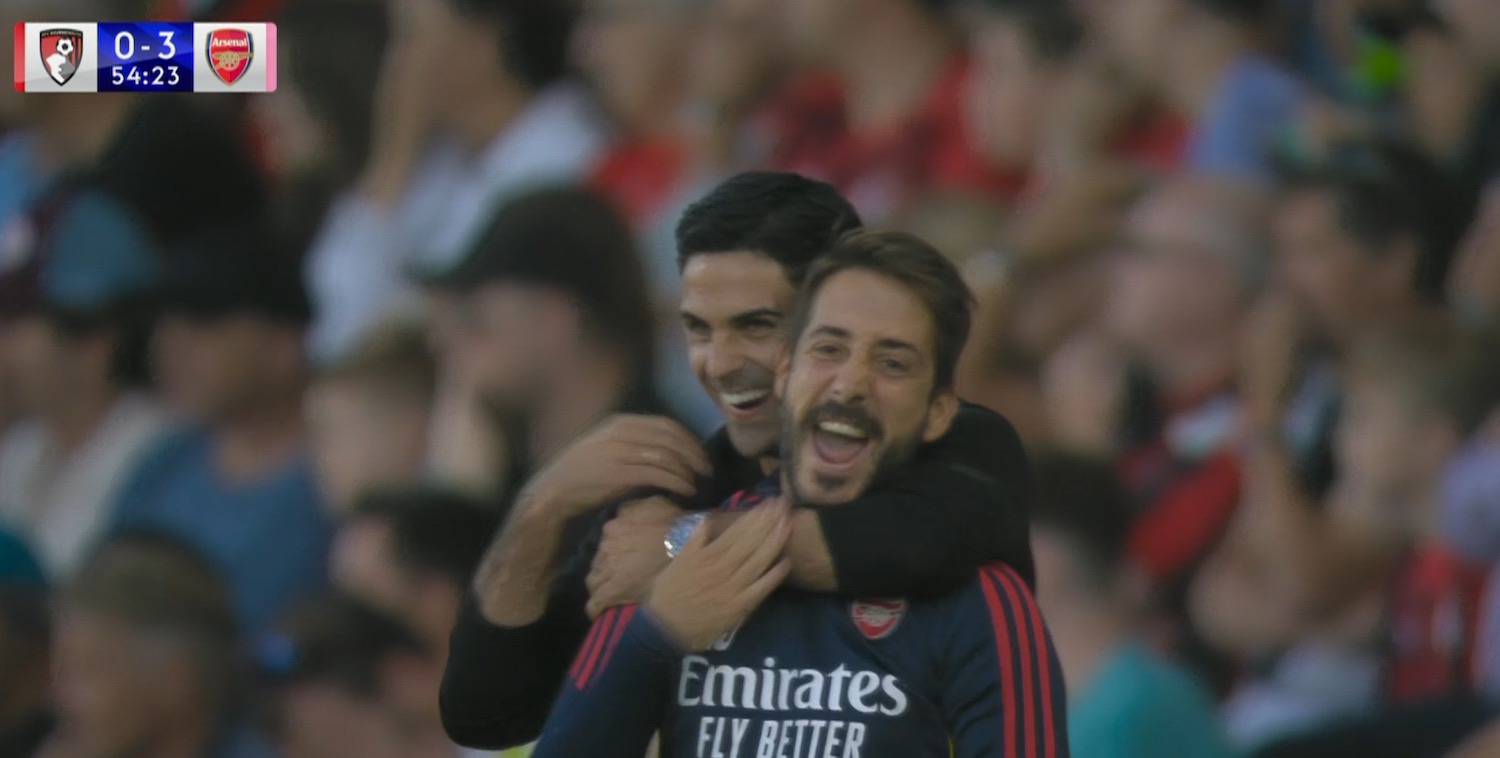 If you were scripting a fictional show about football and you wrote a scene where a young defender, on his return from a loan move away which divided people in a serious way, swept the ball home with his wrong foot to score his first goal for the club, the producers would say ‘Stop it, that’s too far-fetched’, but let’s be honest, this is who we are now. Fetch it as far as you like and it makes a weird, slightly arousing, sense because the Arsenal world is filled with possibility right now.

After that, there was just no way back. Sure, we dropped off a bit and Bournemouth had a couple of half-chances, but that’s all they were. At the other end we still could have added more. Jesus deserved a goal and the Odegaard pass deserved an assist but some of the Brazilian’s pixels were deemed to be offside, which is a bit of a shame. He had another opportunity which saw Mark Travers make a good save, and late on subs Eddie Nketiah and Emile Smith Rowe tested the keeper too. It was 3-0, and it could have been more, but while I’m all for keeping standards as high as they should be, let’s not complain about a comprehensive away win to put us top of the table.

I am very happy. It’s really difficult to come here and win 3-0. So credit to the boys, the way we played, especially the way we started the game and continued to play. It’s not easy and we have a good example when they played Aston Villa how different the game was and how different the game became in some parts of the second half as well. At the same time, we have to look at ourselves and in many areas we can still get much better.

If you’ve watched All Or Nothing, those comments won’t be any kind of surprise. My main takeaway from the documentary is Arteta making sure nobody gets too carried away with a win, or too depressed by defeat. He’s right to be happy, and that really should be our focus this morning, but if in training on Monday he wants to ensure other aspects of the performance are worked on, that’s completely understandable too.

As I said though, from our perspective as fans, there’s just a lot to like right now. Of course it’s early days, and there’s a lot of football to play, but you have to enjoy this as it’s happening. For a while now it has felt like something is growing, something is developing before our eyes, and as I said above, that’s reflected in what’s happening in the stands too.

Belief. Optimism. Excitement. Expectation. Confidence. Whatever you want to call it, these positive traits transmit themselves – to use an Arteta-ism – from pitch to fans, and back the other way. It’s really quite something, and I hope we can maintain it throughout this season and far beyond that.

Of course we have to strive to do better and to keep improving, but you also need to acknowledge that we’re doing that from a place of real positivity. This isn’t the archetypal ‘We’ve got to work hard in training and make sure the next result is a good one’ kinda thing we’ve had too often.

Credit to the manager and his staff, and obviously the players, but also the fans who are playing their part in this really promising start to the season. You could see at the end how much the players enjoyed the reception they got, and while it might be intangible until Opta invent the xF stats (excpected Fan impact), you can’t convince me that this stuff doesn’t matter. It’s great to see.

Now, if you’ll excuse me, I have a hankering for some breakfast Margaritas for some reason, can’t quite figure out why.

James and I will be recording the Arsecast Extra a little later today. Keep an eye out for the call for questions on Twitter @gunnerblog and @arseblog on Twitter with the hashtag #arsecastextra – or if you’re on Arseblog Member on Patreon, leave your question in the #arsecast-extra-questions channel on our Discord server.

We’ll have the pod for you around lunchtime. For now, take it easy.