In total contrast to how Fabio Vieira was signed, months of groundwork and negotiation have finally paid off with Arsenal confirming the arrival of Manchester City forward Gabriel Jesus.

But who is the Brazilian, what will he bring to the side and why is he costing £45 million? Phil Costa (@_philcosta) reports.

In the weird and wonderful world of Brazilian football, nothing generates more excitement than a bright young talent bursting onto the scene. However, for every Neymar and Vinicius Junior, there is a Bernard and Gabriel Barbosa which makes measuring talent (and how they could eventually adapt to Europe) quite difficult. But there were no such concerns when a somewhat temperamental Gabriel Jesus broke through at Palmeiras seven years ago.

He was no internal secret having scored 91 goals in 70 appearances at youth level, with Palmeiras fans even demanding his inclusion through an official petition as their club battled relegation. Unfortunately their pleas were ignored but Jesus would soon make his impact, scoring 19 goals over the next two Série A seasons and four goals in five appearances during the 2016 Copa Libertadores, alerting several top European clubs before Manchester City won the race for his signature – making him the leagues’ then second most-expensive sale at €32m.

Fast forward five years and the eight major trophies that have followed certainly justify his decision. But as the saying goes, “the more things change, the more they stay the same,” with one question still being asked – what is Jesus’ best position?

Quite simply, under Pep Guardiola, the 25-year-old hasn’t needed one. He is a Swiss army-knife for City having been deployed at left wing, right wing and centre forward depending on game state or opposition. And while his 141 goal contributions (95G, 45A) in 236 appearances are clear evidence of end product, what makes him unique are his qualities surrounding the numbers.

99 – Gabriel Jesus's 99 starts in the Premier League broken down by game position:

From the right, Jesus can match Theo Walcott-esque runs (from out to in) with more natural combination play when drifting inside, which was well illustrated in both league fixtures against Liverpool last season. While from the left, he is more willing to drive at defenders and shoot, either curling strikes into the far corner or cutting the ball back for well-placed teammates. Despite looking slightly untidy in possession, Jesus also possesses one of the best stop-and-gos in English football, using his agile yet stocky frame to deceive defenders within close quarters.

As a central striker – where it seems Mikel Arteta is most likely to use the Brazilian – his penalty box prowess is much clearer. According to StatsBomb, Jesus currently averages 2.9 shots per 90 which betters every Arsenal player in the current squad and, since his Premier League debut, no other player has scored more goals from inside the area (58). More importantly, his ability to drop deep and link play but also stretch defences by running in behind offers a welcome fix for the Gunners. Too often last season they settled for one or the other with Alexandre Lacazette and Eddie Nketiah ultimately falling short. 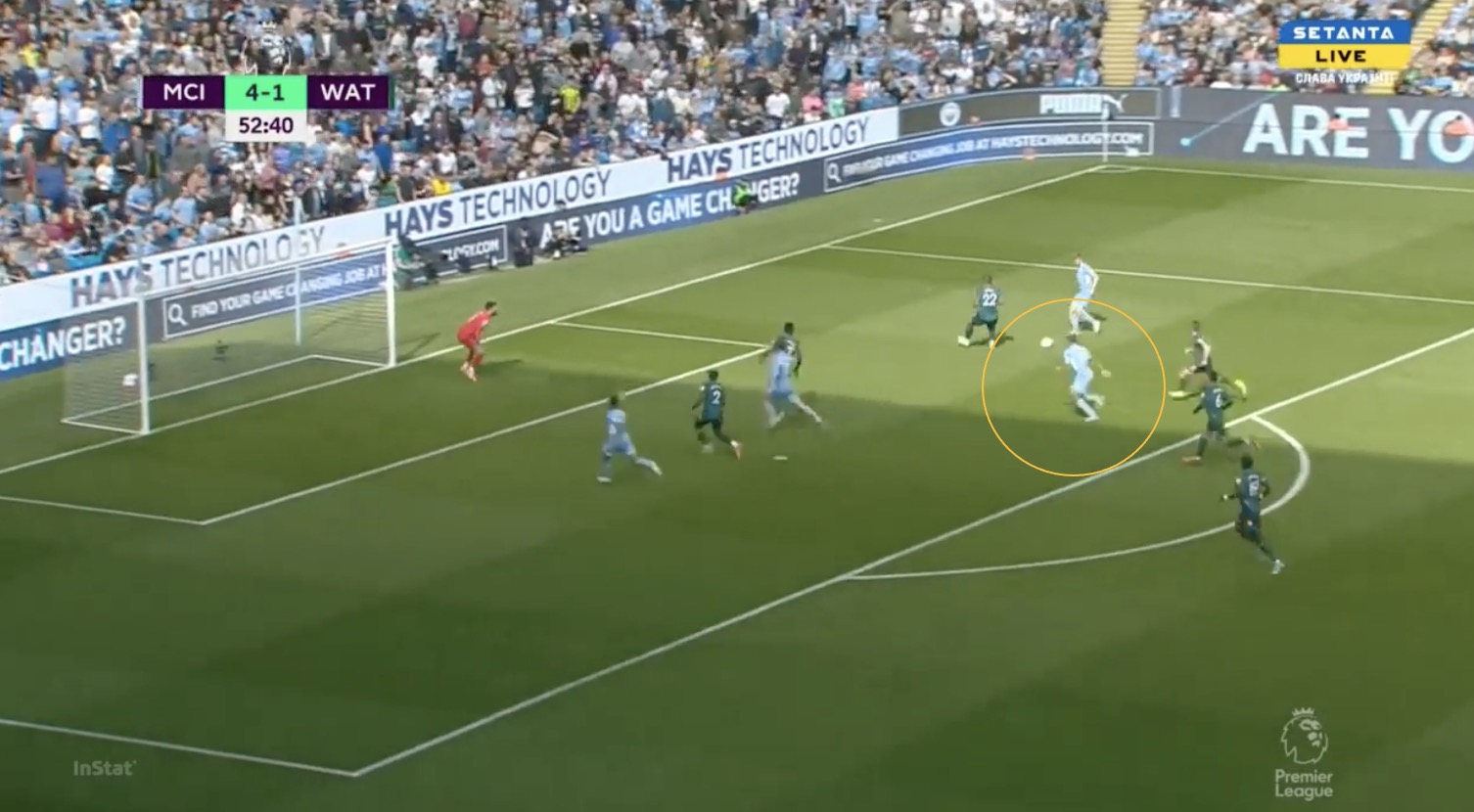 Another characteristic which will have been high on the scouting checklist: pressing. Both Guardiola and Brazil manager Tite consider Jesus “the best pressing forward in the world” and that becomes clear when watching him play. His style is unique in the way he seems lax or disinterested, before springing to life and forcing defenders into mistakes. He is also incredibly strong and bounces players off with ease, preferring to pinch the ball from behind and launching a quick turnover.

According to FBRef, Jesus sits in the 96th percentile for interceptions and the 88th percentile for blocks among other forwards, highlighting his defensive instincts. They did in spurts last season but for Arsenal to reach that desired next level, a coherent pressing system must be perfected – they’ve signed one of the best around to help them.

But ultimately the main concern when buying a £45m forward should be about goalscoring. Wayward finishing was often excused during Jesus’ early days at City with his expected goals (xG) numbers sitting above his actual goal return, hinting that goals would eventually level out. But the forward has under-performed his xG in four of his five Premier League seasons, over-performing by just 0.2 in the other, potentially pointing at why he struggled to establish himself at City. 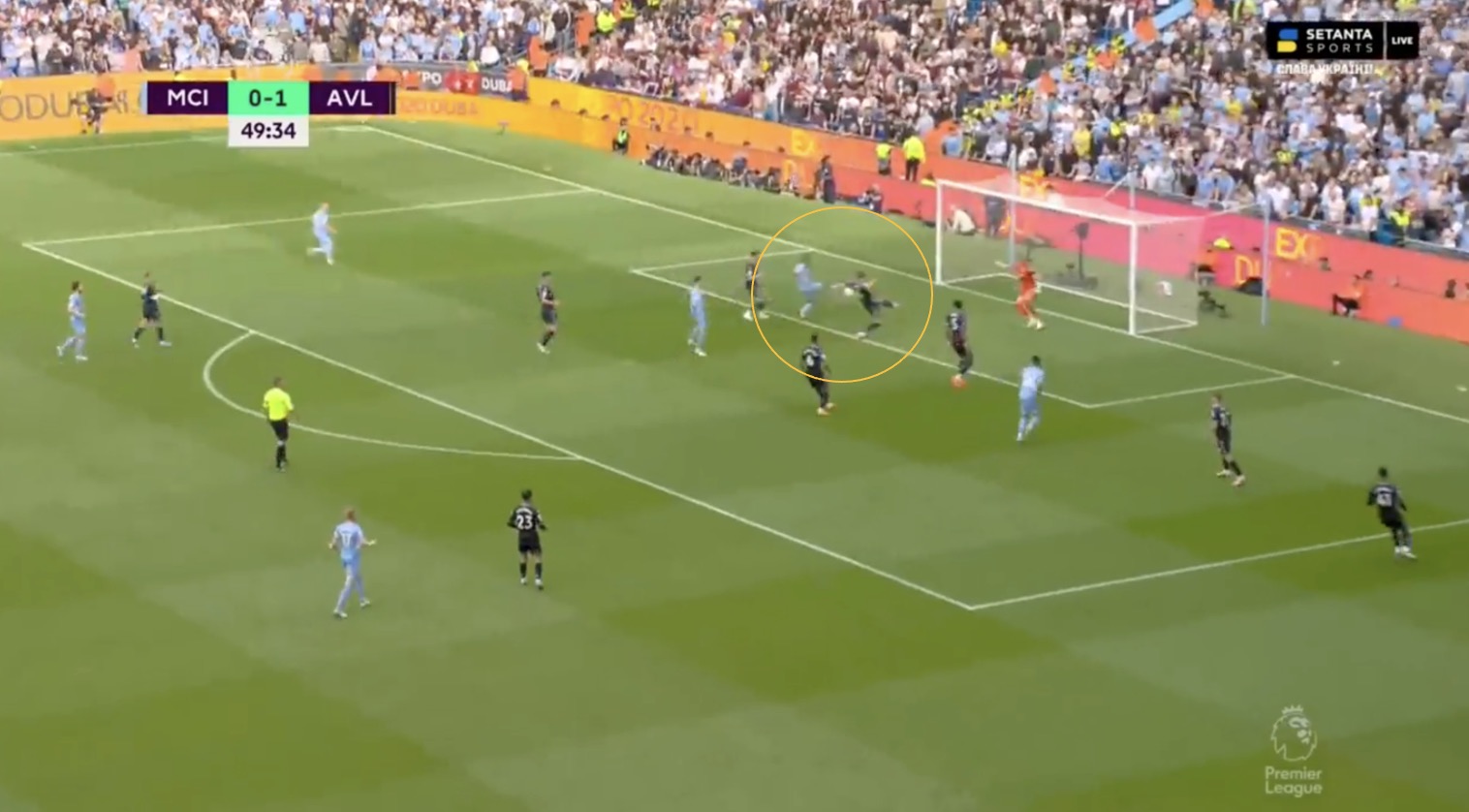 The Brazilian often lacks composure at crucial moments and snatches at chances when rushed. Jesus could also improve his ball striking technique as he is prone to scuffs and mishits, in addition to suffering from tunnel vision – shooting when teammates are better placed – although some will view this habit differently. He does, however, boast a strong record in big games having scored against Real Madrid, Paris Saint-Germain, Liverpool and Chelsea in the past two seasons, and is arguably Guardiola’s most trusted general when needing a result.

“If there’s one person who deserves the best in life, it’s Gabriel,” said the City boss after his four-goal haul against Watford in April.

“All of us at the club, we’re happy for him because he’s so generous. It doesn’t matter what position he’s going to play, we know how he fights for his mates. He’s fantastic.”

And that’s the crux of this deal. Jesus is a technically secure, versatile forward who can lead the line, score goals and elevate those around him. He is Premier League proven but still with his peak years ahead of him, and fought extremely hard to be in this position. Everybody has seen the picture of him painting the streets of São Paulo during the 2014 World Cup; he is now a regular Brazil international. That level of character and mental strength has been a clear recruitment angle for Arteta.

There have also been occasions where his emotions have bested him. Red cards against Rosario Central while playing for Palmeiras and Peru in the Copa América final spring to mind, although those outbursts have rarely been seen at City with every player conditioned into Pep Bots™ upon arrival.

The simple truth is that Arsenal and Jesus are gambling on each other. In a barren striker market, the club have placed all their chips on the Brazilian and expect him to make a difference to their fortunes – with a pay packet to match; while Jesus is sacrificing Champions League football in a World Cup year, stepping down in hope of becoming the main man at this exciting project.

No transfer is a guarantee but as the ball trickles across the roulette table, everything points towards a big payout with red; number nine.

Previous articleWhat is the plan for central midfield?
Next articleArsecast Extra Episode 479 – 04.07.2022