There was behind-closed-doors pre-season action as we played a game against Brentford at London Colney.

The subs used were: Charlie Patino, Zach Awe, Lino Sousa, and Charles Sagoe Jr – so very much a second string/fringe collection of players. With Sevilla on Saturday at the Emirates, the rest of them looked on from the sidelines as we lost 2-1. Eddie scored our goal, beyond that I don’t really know what else there is to say about a game that was more about fitness than anything else.

I suppose one thing that stands out is the involvement of Eddie, and it’s clear there’s a 1-2 pecking order with him and Gabriel Jesus for the centre-forward position. Mikel Arteta did talk about the two of them playing together at times, but it’s not explicitly clear if he means he has plans to start them in the same game, or if inevitably there will be occasions when we have our two main forwards on the pitch because we’re chasing goals.

What has been notable during this pre-season is how little Flo Balogun has been involved. He was on the US tour but barely got any playing time, and you would have thought he’d be the perfect candidate for a run-out in a game like the one yesterday. It may well be that he’s close to a loan move, which would make all kinds of sense for him and his own development, and explain his absence; or perhaps he’s carrying a little knock we don’t know about which means he can’t play.

However, it does raise the question of depth at centre-forward. I’m as excited as anyone else about Gabriel Jesus and what he’ll bring to this team, but without wanting to go down the worst-case-scenario road, we have created something of a reliance on him already. On one level, it’s normal: he’s a fantastic player and his quality means that he’s going to be a very important part of the team next season and beyond. On another though, when the only back-up we have is Eddie, it does feel a bit light. Of course, Balogun could stay and be that third striker option, but as I mentioned above, it really does feel like he’s at a point in his development where regular playing time is absolutely vital, and occasional cameos from the bench or the odd cup game aren’t going to be enough for that.

I do wonder if the versatility factor that we’ve spoken about this summer might be part of the manager’s contingency plan for centre-forward. He has spoken about Emile Smith Rowe as a false 9 before, while Fabio Vieira has played as a second striker at Porto. There’s also Gabriel Martinelli who could be deployed more centrally, leaving room on the left for someone else, but until now Arteta hasn’t seemed overly keen on using the young Brazilian in the centre-forward position. I don’t think Arsenal are going to sign another striker, but there’s a lot of talk about how we might be in the market for another winger, and perhaps that player might have the kind of profile that would allow him, or someone else, to play centrally when required.

Similarly, there’s been a lot of talk about Thomas Partey, and how we need someone who can do what he does in central midfield. Personally, I think that’s an unlikely signing. If you have someone good enough to do what Partey does, he’s not going to be happy to sit on the bench for a large chunk of the season until the Ghanaian gets injured. So, I think the plan for his absence, if and when it happens, returns us to the versatility of others.

There is no other player in the squad who can do what Partey does in that deep-lying midfield role, and some might see that as a single point of failure. However, I can’t imagine that after two seasons when he has been afflicted by injury at key times, the manager hasn’t considered his options in that regard. Rather than it being a like for like swap, I suspect there’s going to be an alternative set-up in central midfield. A combination of players like Granit Xhaka, Albert Sambi Lokonga, Martin Odegaard, Fabio Vieira, Mohamed Elneny, a tactical shift, and maybe even another addition to the squad if we can make sufficient room by moving some players on.

The long-standing interest in Youri Tielemans hasn’t gone away, but with a 33 man squad right now, it feels very much like we need to get some players out the door before anyone else can come in. Being without Partey is generally a blow, but if you can reconfigure and have someone like Tielemans in a slightly different midfield set-up, it won’t be as difficult as it has been.

All of which is to say, there are players whose quality is such that if you’re dependent on like for like replacements, chances are you’re going to suffer when they’re not around. It remains to be seen exactly what the manager’s thinking is, and it might only become apparent during the season when circumstances crop up. It’s an interesting one because finding those kind of solutions hasn’t always been his strong point, but you have to believe someone as meticulous as Arteta has thought carefully about how to cope with key absences – particularly as they were so costly last season.

Ok, that’s your lot for this morning. Just a reminder that there’s just a week to go to get involved in our Patreon Fantasy Football league for next season. There are great prizes to win (see below), and you can sign up at patreon.com/arseblog if you fancy your chances. 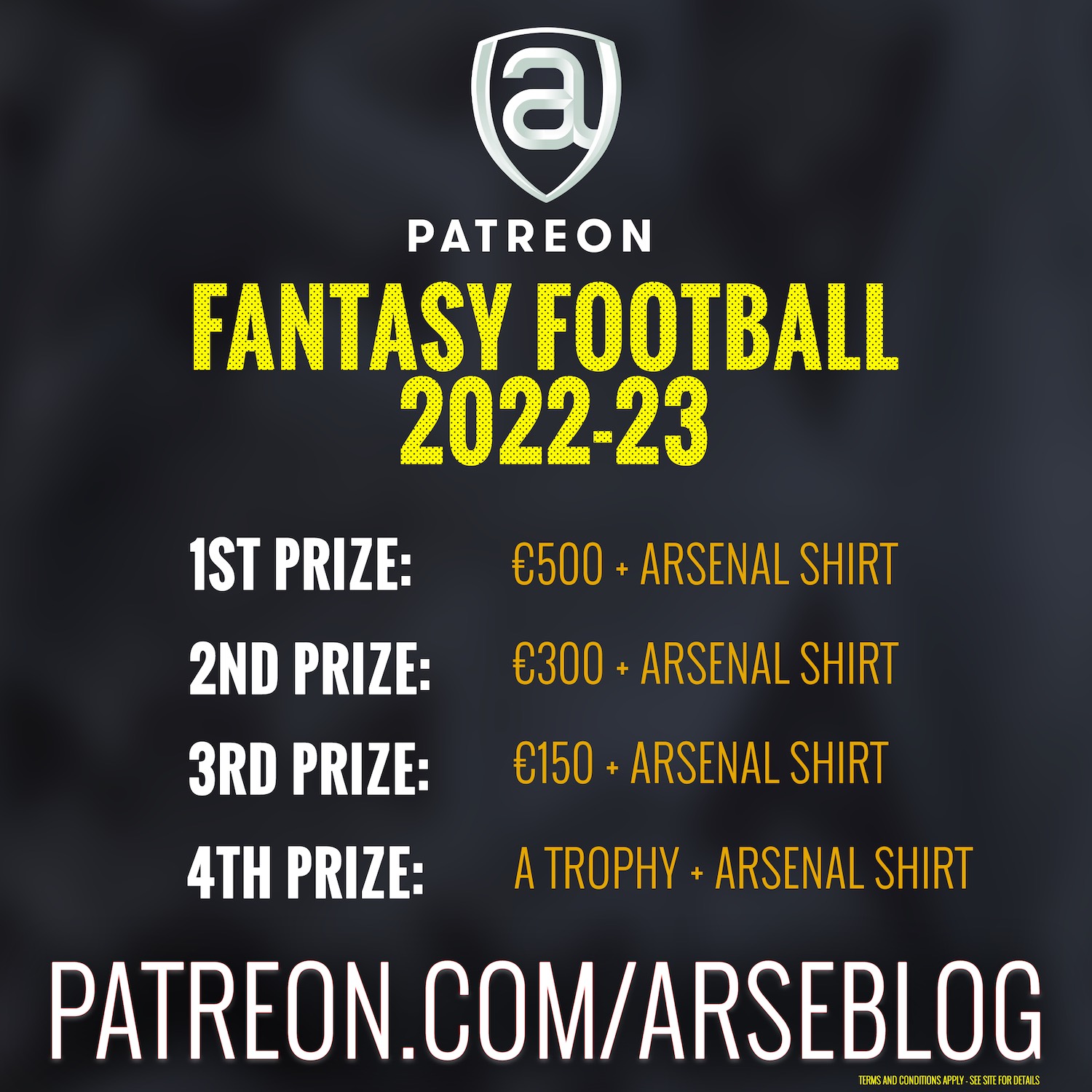