What a week. Arsenal beat Chelsea and Man Utd, Sp*rs dropped points, and although the focus will be primarily on the three points we picked up, the man with the most annoying face in modern football played a major part in in our victory yesterday and if people think that aspect of it doesn’t matter, well I don’t know what to say to you.

I thought yesterday was similar to the Chelsea game in terms of first half chaos factor, with Arsenal taking the lead early on through Captain Chaos himself, Nuno Tavares. Fair play to him for following in on Bukayo Saka’s shot which had been saved by David de Gea but the crap ballet / going to the store antics of the United defenders which led to that shot in the first place were hilarious. What on earth were they doing? Never mind, goal Arsenal, Nuno’s knee slide, like other parts of his game, needs some fine-tuning but scoring first is always good for this team.

We didn’t exactly build on it though and United had opportunities. A fantastic Gabriel tackle denied Bruno Fernandes after a dreadful Aaron Ramsdale pass had gifted them a chance, and some lad hit the bar from distance. United wanted a penalty for a Cedric handball but the rules clearly state they can stick it up their holes, which is why it wasn’t given. Also the rule states a player falling can’t do a deliberate handball which I think is kinda nonsense and in the cold light of day we might have had a bit of luck there. My rule of thumb re: penalties is ‘Would I want it up the other end’, and I think I’d have been unhappy if it wasn’t given. Not as unhappy as Rio Ferdinand was, but still not that pleased.

Eddie had a great chance to score but fired straight at the keeper, then a super Odegaard flick put Saka in, he was taken out, Eddie put it in the net for 2-0 but it wasn’t 2-0 because he was offside. However, the lad on VAR must have popped a creamy white dove or a chunky Mitsubishi before the game because he was filled with bliss and not-hate for Arsenal, which isn’t always the case. They deemed there had been a foul before the offside, awarded a penalty and Saka stepped up to slot it and make it 2-0.

Yes! Breathing room. But then we entered the self-strangulation zone by letting United score. I don’t think any of Ramsdale, Gabriel or Tavares covered themselves in much defensive glory to allow Ronaldo to score his customary goal against us. The finish was really good, but there’s just no way he should have had the space for a shot with two defenders around him. Late on in the half Ramsdale made a good save but we were panicking, you could almost hear Cedric’s Homer Simpson scream as he sliced the ball out for a corner when there was no need.

Nuno had a chance in the second half but blazed his shot high and wide as if his only education in the matter of shooting came from watching David Luiz free kick videos, but slowly United got on top. I felt we needed to change something, but before we could, they had a penalty. An obvious handball from Nuno who was beginning to have quite a torrid time. Up stepped Bruno Fernandes, the aforementioned man with the world’s most annoying face, like an evil chinchilla that has just been exhumed from Steven King’s Pet Cemetary, and he stood over the ball ready to inflict pain upon us.

Quite why Ronaldo didn’t take it I have no idea, but I’m glad he didn’t because I’m sure he’d have scored. That in itself would have been bad, but to be sitting here this morning not basking in the enjoyment of Fernandes doing his skippity-hoppity run-up only to miss it and see the ball squirt wide off the outside of the post would be a terrible thing. Instead we are sitting here basking in it, and basking like a big old basking shark is what I’m going to do throughout the day. I’ve already watched the replay about 54 times and it’s funnier each time, not least because of Aaron Ramsdale doing a 9/10 Martin Keown impression afterwards, much the amusement of the Spanish commentators on the download of the game I got.

“Wow, look at Ramsdale getting in the face of Bruno!”

“This game is loco!”

“Look look look, Ramsdale runs out to celebrate 1 metre from Bruno! What a picture!” 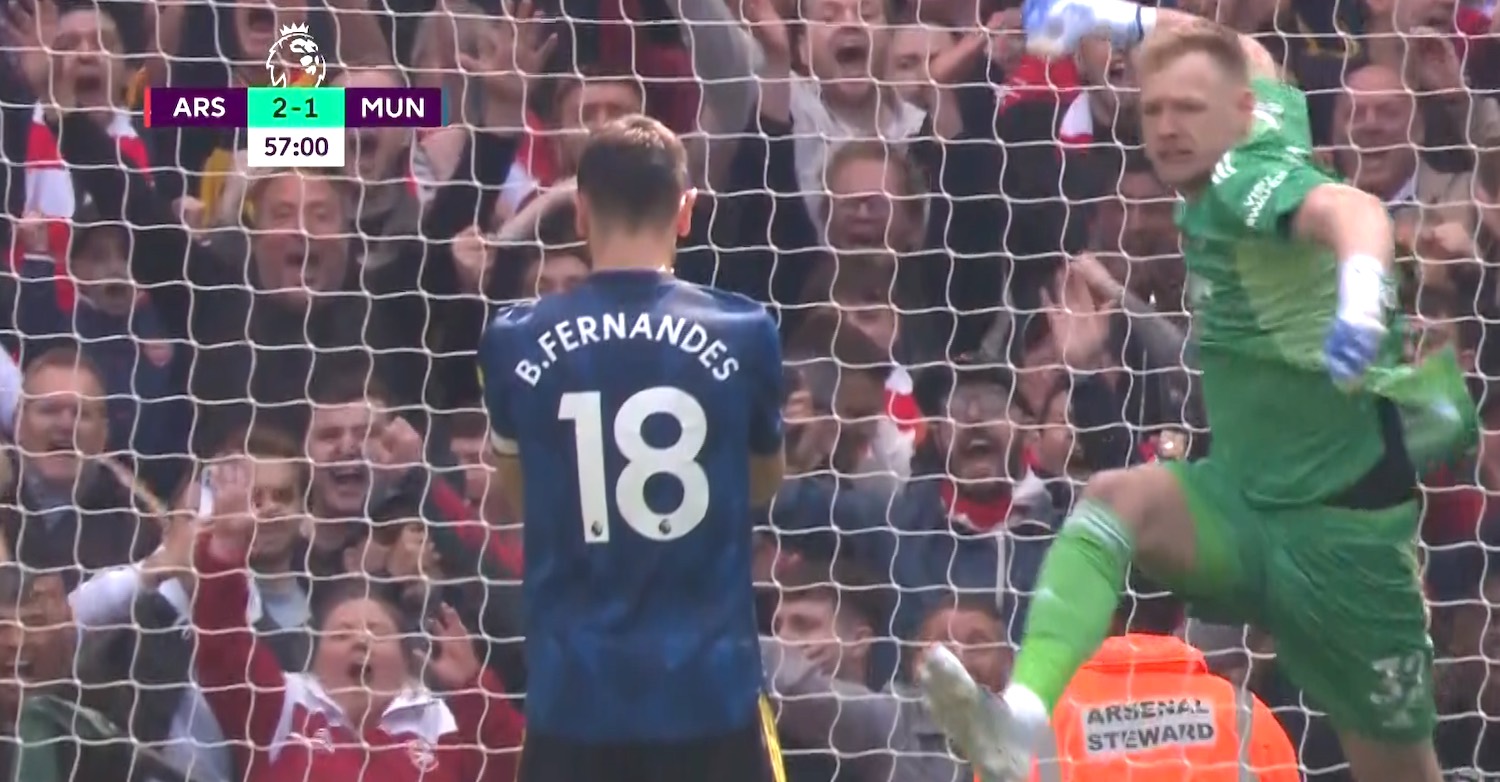 While I heartily recommend Nuno Tavares spends some time this week working on his jumping technique and his not handling the ball in the box technique, on this occasion he gave us something to really enjoy. It’s unconventional, I’ll grant you that, but sometimes that’s the way it goes.

Still, it would be wrong to say that turned the tide in our favour. United were still dangerous. Ronaldo had a goal disallowed for what looked like an obvious offside until VAR put the heart crossways in me and it turned out to be offside but marginally so. Ramsdale had to make a superb save to deny some lad whose shot came off the post, and Nuno had another difficult moment when Elanga ran past him.

At this point I thought the manager should take him off, but instead he put Martinelli on in place of Smith Rowe, and that seemed to help. Shortly afterwards we went further ahead. There were shouts for handball in their box and, perhaps distracted by the thoughts of a VAR check, Fernandes lost the ball to Elneny who fed Xhaka who slammed a 30 yard fizzer beyond de Gea and into the back of the net.

“I like to score against United,” he said afterwards, and I think he deserves props for his contribution this week. He was excellent against Chelsea, and yesterday – although we went through some difficult periods as a team – I thought he was our man of the match. The experience, the calm, the security on the ball, it was badly needed, and to seal the game with a goal like that was no less than he deserved.

The final 20 minutes played out without too much fuss which, considering the mayhem we’d had up until that point, was no bad thing. We saw a return for Tomi, which was great, and it would be remiss of me not to mention the fact that Fernandes should have been sent off for a nasty, snide studs-up challenge on Nuno. He went in long after the ball had gone, but for some reason he gets away with things like that all the time and I don’t really understand why. If that was you-know-who etc etc. Fair play to Ian Wright for calling it out on Match of the Day last night, because when a professional goes in late like that on an opponent’s standing leg, the only reason is to hurt them and that shouldn’t be acceptable on any level. I hope he spends all day standing on upturned plugs, the prick.

Afterwards, Mikel Arteta smiled like a man who had been through the emotional ringer, a feeling I think we can all identify with, and said:

I think it was a phenomenal game for the spectators and the fans. For us it was a bit of a rollercoaster. What I see is a team that is so willing, that gives absolutely everything. The energy and the connection they have in that stadium with them is phenomenal and that gives us a real chance and makes me believe that we can do it.

If we’re being straightforward this morning, we should acknowledge that this is a game which could have gone another way, especially if they’d scored that penalty. We all know that. We all understand it on an intellectual level. We know there’s a need for some serious analysis, but that’s cold light of the day stuff. And that day is not today. I reckon that day might be tomorrow or even Tuesday.

Today is about how it feels, and beating Man United always feels good. Beating them just days after you’ve beaten Chelsea away feels even better, and we should spend some time just enjoying in all it’s glorious, chaotic, madcap, lunatic imperfection. It’s the beauty of sport. It lifts you up, it puts you down, but today I’m Up like a cartoon house with a load of balloons attached having popped one of the VAR lad’s pills along the way.

Have a great Sunday, unless your name is Bruno Fernandes.