Arsenal served up a delicious slice of festive fare last night, hammering hapless Norwich 5-0, making it 9 goals from our last two away games. Mikel Arteta was without four right back options – Takehiro Tomiyasu, Cedric, Calum Chambers, and Ainsley Maitland-Niles – all of whom had tested positive for Covid. It meant the one change from the side that beat Leeds was Rob Holding at centre-half with Ben White shifting to right back.

We began brightly, going ahead in the 6th minute after we won the ball in their half and moved it quickly from left to right. Bukayo Saka’s shot curled in, one of those goals that looks so simple you wonder why the keeper didn’t stop it. Taking nothing away from Saka, but I think it’s the kind of finish you see more often when you’re playing a bottom of the table side whose first choice goalkeeper is out of action.

Although the second goal didn’t arrive until just before half-time, we were always on top. Martin Odegaard was superb, pulling the strings and oiling our attacking engine. His recent form has been so good, and you can see how influential he is becoming. Norwich didn’t have much to offer beyond a few meaty challenges, and for a few minutes the game looked like it might be getting away from the referee who let a couple of things go. Xhaka got booked for being Xhaka while it was seemingly ok to clatter Saka from behind (there must be enough of those now this season for the video compilation makers to put one together with a naff Europop soundtrack). I enjoyed Ben White’s vigorous, but fair, tackle shortly afterwards and his steely response to some Norwich lad taking exception to it.

The best way for us to respond was always going to be with the ball though, and when Martinelli brilliantly won it back on the right hand side, Odegaard switched it to the overlapping Tierney whose calmly placed finish off the inside of the far post gave the scoreline the bit of daylight our performance deserved going into the break. I wrote about Martinelli’s workrate and his pressing after the West Ham game, and the second goal was another perfect example. Look where he is when he starts the chase: 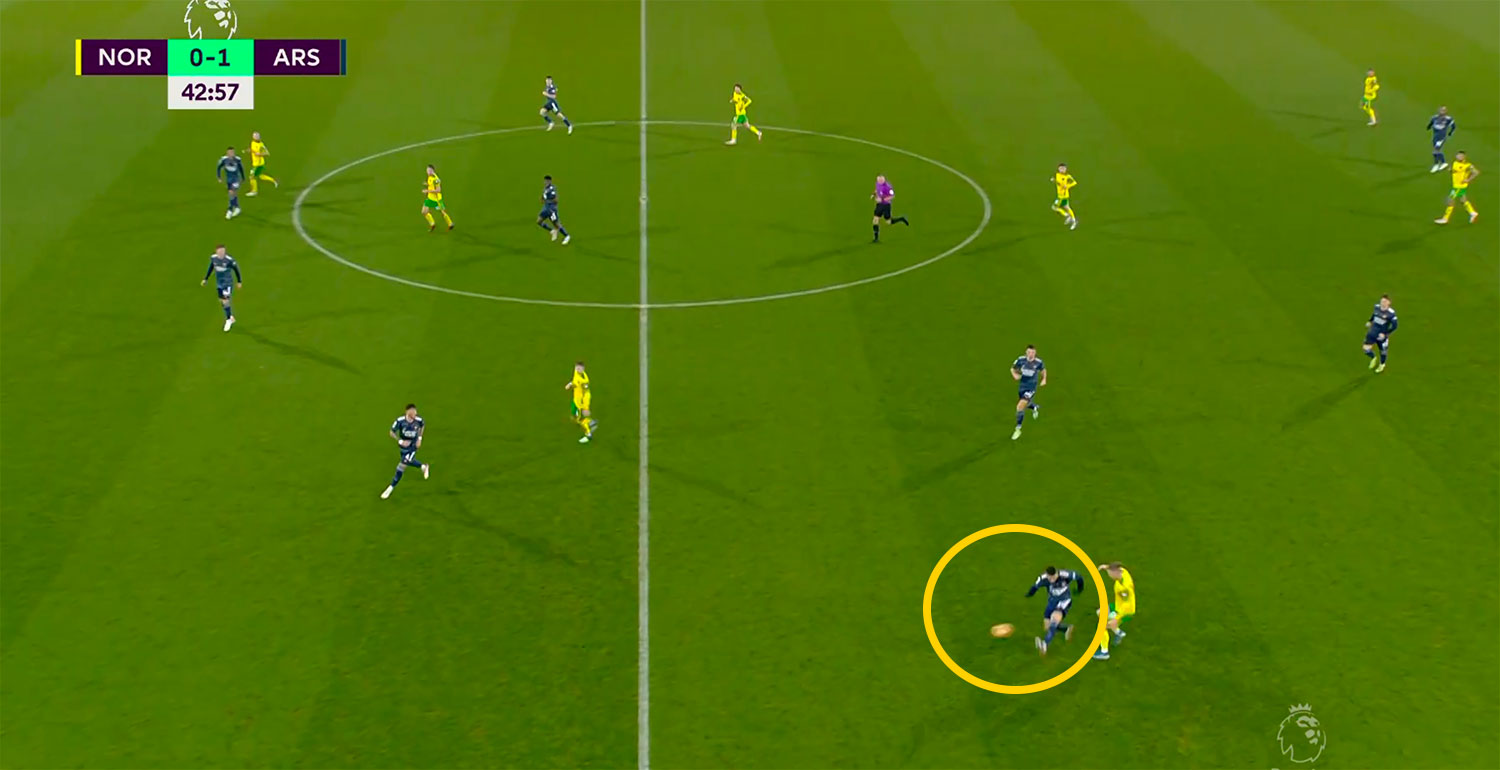 Turning over possession much more regularly in the opposition half has, I think, been part of why the team has been so much more effective from an attacking perspective of late. Yes, quality of opposition blah blah blah, but it’s still a very welcome development from a side whose fundamental issue was chance creation and a lack of goals.

We might have had a penalty due to a handball early in the second half (I think it would have been harsh to be honest); Martinelli had a goal disallowed for offside after a superb White pass; but Saka showed his quality again, bamboozling a defender one way then the other way before making his second finish of the night look as easy as his first. Arteta made changes with Elneny and Pepe coming on for Partey and Saka, but it was the introduction of Emile Smith Rowe that added the icing to the Christmas cake.

His simple, but hugely effective movement, saw him play a really smart pass to Lacazette who was bundled over in the box for a penalty. The Frenchman, having missed his last spot-kick, made no mistake this time to make it 4-0, and remarkably, Smith Rowe himself got on the scoresheet to tap home a Pepe cross to make it 5-0 just before the end. That made it 4 goals in 4 successive substitute appearances, the first player in Arsenal history to ever do that:

Smith Rowe is the first player in #Arsenal’s history to score in 4 consecutive substitute appearances, while #AFC have had a sub score in 4 successive matches for just a third time, previously doing so in September 2004 (run of 5 under Wenger) & July 2020 ( run of 4 under Arteta)

It’s incredible to look at his impact over the last 12 months, not to mention the fact he’s  doing it from the bench for the last few weeks. What’s interesting about this is that it doesn’t feel like a big issue. Obviously it can’t go on forever – by that I mean his goalscoring or his omission from the starting line-up – but right now the players Arteta is picking are doing the business and deserve to play. What I’m not seeing are the worst case scenario think pieces, the kind of outlook that when things are 100% silver lining we have to invent some clouds. I can’t say for sure, but my theory is that the closeness and togetherness of this group of players makes that kind of thing redundant right now.

So much of football is about how you feel, and right now it feels good. When you consider that there are potentially divisive issues (Aubameyang, our club record signing being essentially a bit-part player), it says a lot about the core of this young team and how they’re developing together as individuals and a collective.

I have to say I like this team. I like how we’re playing now. I like the character we’ve shown. I like the progress and I like the potential. It’s hard to quantify precisely, but there have been players and personalities, cliques and cultures which have not created a healthy environment at this club in the not too distant past and that is an impediment to connection from this fan’s perspective. There are myriad reasons for that, and we don’t need to go over them again – that ground is well trodden – but right now I like what this group of players does and how they do it. I like how it’s been put together and how we can see improvement based on an obvious strategy.

They’re not perfect, there will be bumps in the road and games which don’t go as well as they can, but I don’t see anyone out there phoning it in, I don’t see heads go down, I don’t see players who care so little they won’t stick up for their teammates or the shirt, and that’s something I can absolutely get on board with.

I’m very happy, it’s not easy to win away from home in the league. The way we performed, how dominant we were from the beginning and the quality that we showed throughout the game, really impressive today.

Who can argue? And on the development of the team:

The direction the team is taking, and how we are growing the understanding between players. Obviously they’ve been playing now for a few months together. The unity that we show in general, and the support that we are getting in every ground from our supporters is very much linked with the way we can transmit the way we want to play.

Again, you can’t go overboard after a win against a bottom of the table side who were missing plenty of players, but we had absences of our own, and these are games when previously we’ve had some struggles. With all due respect to the opposition, this is what we should do in these circumstances, so when we do, it’s pleasing and credit is due.

I’m sure the manager will be keeping feet on the ground, ensuring nobody gets carried away. Treading that fine line between reality and how much there is still to do, while at the same time embracing some of the positivity and confidence the players must be feeling. That’s an important aspect too. All in all, a very good afternoon’s work.

The issue of how we would cope with two games in less than 48 hours is now moot, after the Wolves game was called off due to Covid cases + injuries meaning they couldn’t field a team. On the one hand, you could see how it might be beneficial, especially given the extra rest they’d have had, but on the other legs never feel that tired when you’re winning and playing well. Maybe our momentum would have seen us through.

It’s also a real shame for fans, particularly those who have made plans to travel from afar, with flights and hotels and all the rest. For those whose Christmas presents for the kids were Arsenal tickets. In the completely abstract sense we can understand a postponement, but to many supporters it’s a real blow, and I’m sorry for anyone whose plans have been massively impacted because of it. More on that tomorrow, and it means Man City is next up in the Premier League. Easy-peasy (/sarcasm).

Just a quick update on the podcast schedule – we will have a Patreon podcast later this afternoon/early evening, and then because Wolves is off, James and I will bring forward the next Arsecast Extra to Tuesday, so we’ll have plenty to talk about then.