“We had to maintain and not be impatient to lose any structure in our play because we were controlling them quite well, but we needed to threaten much more certain spaces and I think we did.”

Mikel Arteta’s Arsenal reign has been a battle between the comfort provided by a strict structure and the threat that unpredictability affords. The manager has consistently tended toward the former, eager to rid the team of its soft underbelly, wary of allowing counter-attacks. Super-structured possession in the opposition half can be a great way to stop conceding too many counter-attacks but can also hold the team back offensively, discouraging the sort of movement that can so often drag defenders out of position and create dangerous situations.

And so it has played out over the last two years. The Arsenal left-back will overlap to form a five-man front-line that occupies all five channels across the width of the pitch. The five players behind them will form either a 2-3 or a 3-2 structure, with the left-sided central midfielder often wider than you would expect and/or the right-back narrower than you’d usually see. It has helped the team become more defensively solid, and offers a solid base for build-up play, but the structure has also seemed to end up with the team attacking with too much rigidity. 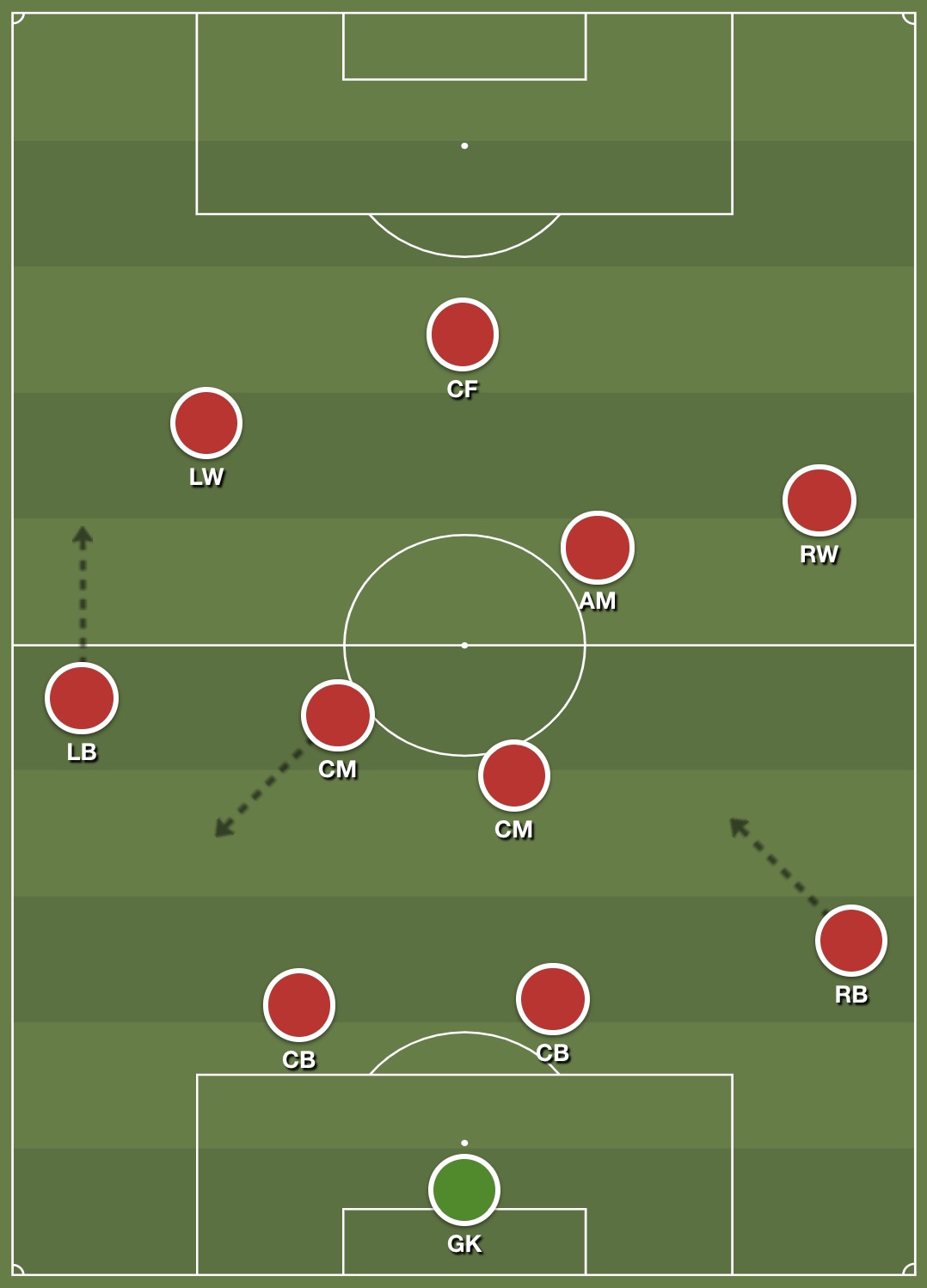 Arsenal have been predictable.

How wonderful it was, then, to see them break Newcastle down with more fluidity and a less-rehearsed interchange of positions on Saturday afternoon. Having driven forward and inside with the ball, Nuno Tavares takes a central position in the attack and Bukayo Saka, who has dropped off to receive and play a pass in midfield, is in the sort of area you’d usually expect to see Thomas Partey or Takehiro Tomiyasu.

That usual front five exists but not in its usual, predictable form. On the right, Saka (circled) isn’t a part of it but Tomiyasu is. On the left, Smith Rowe is holding the width with Tavares (also circled) suddenly where you’d usually expect to see the striker. 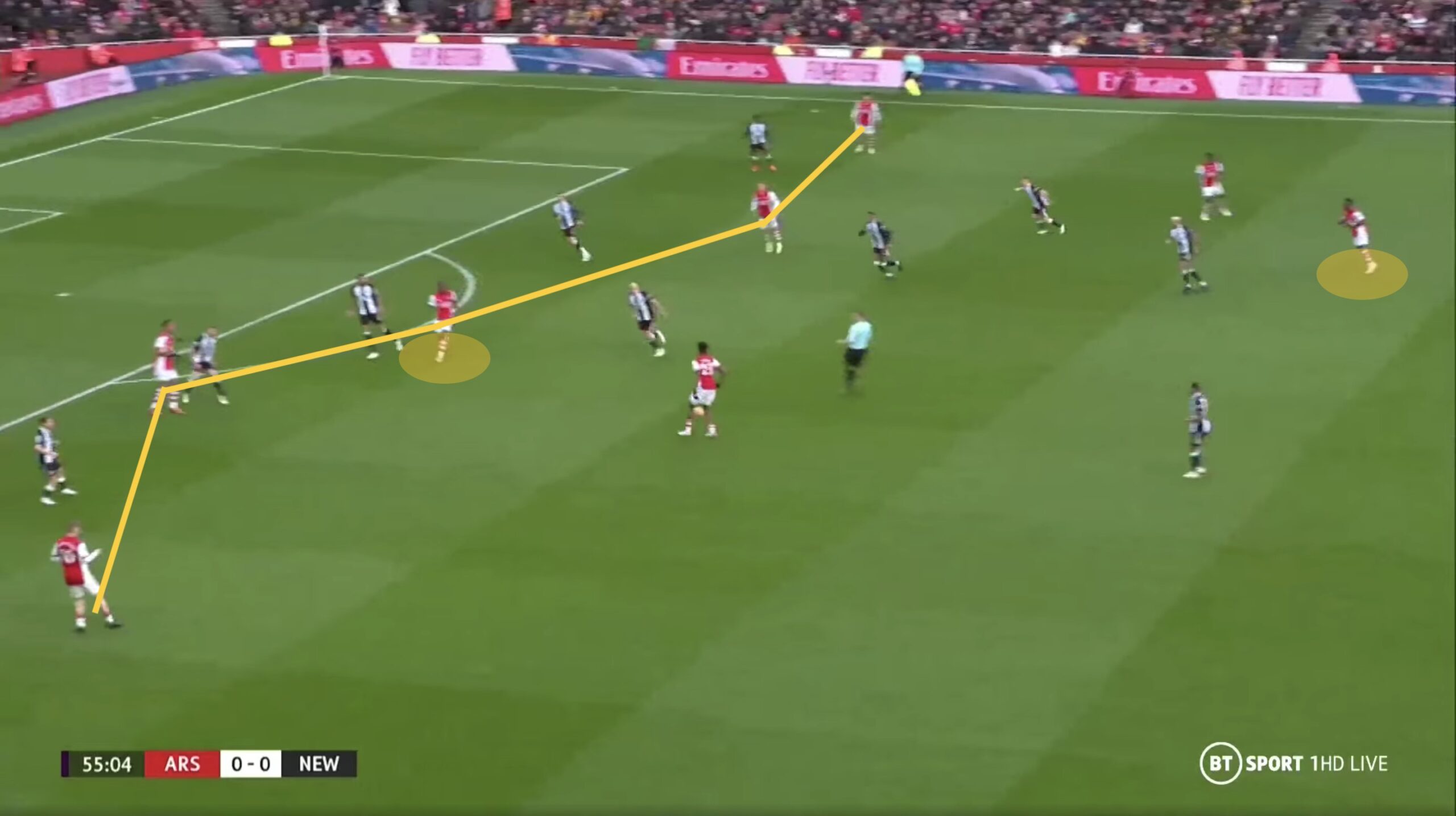 And it didn’t end there. Tavares and Saka kept moving and it meant Newcastle had to decide whose job it was to pick them up. They didn’t. 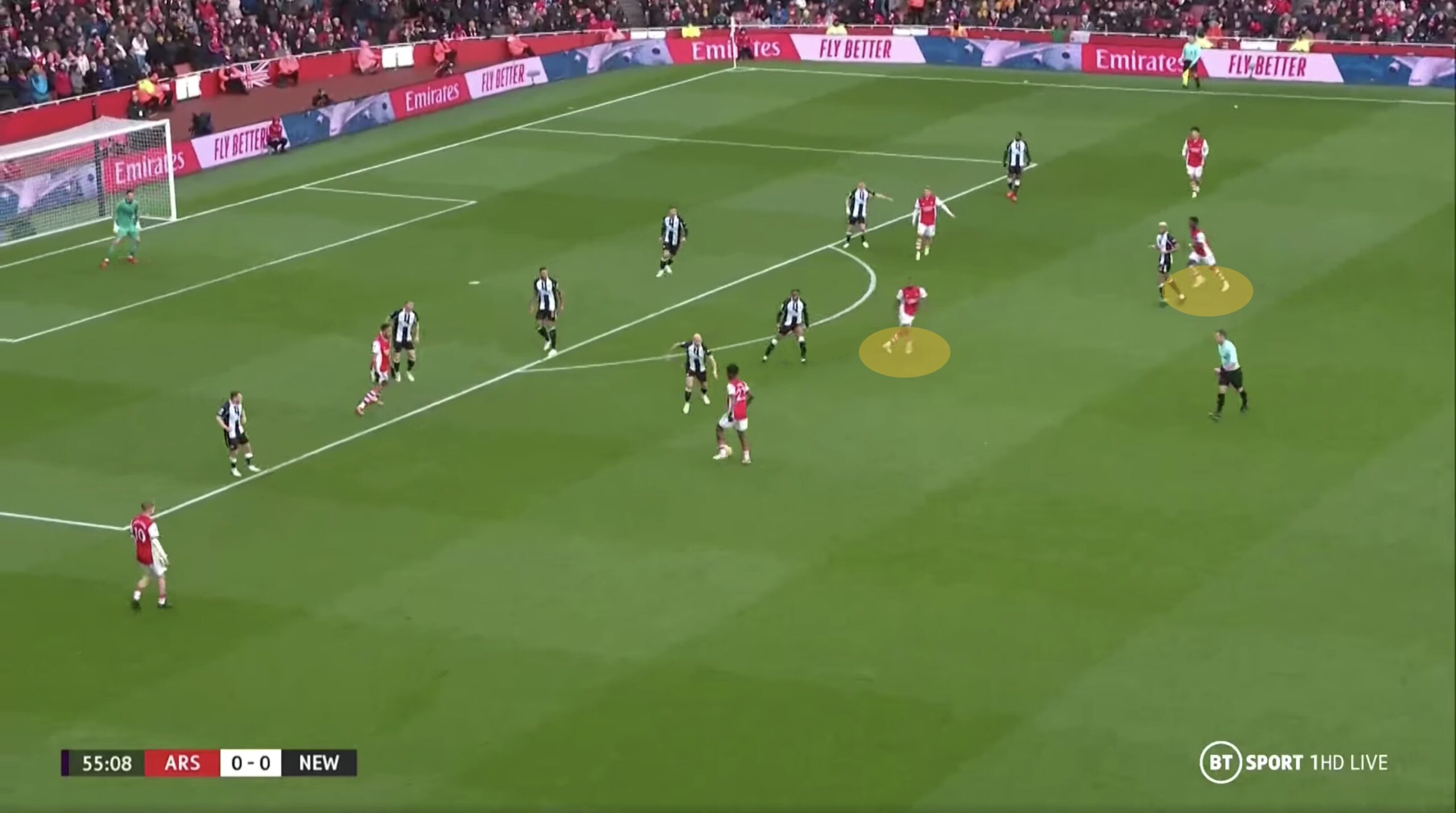 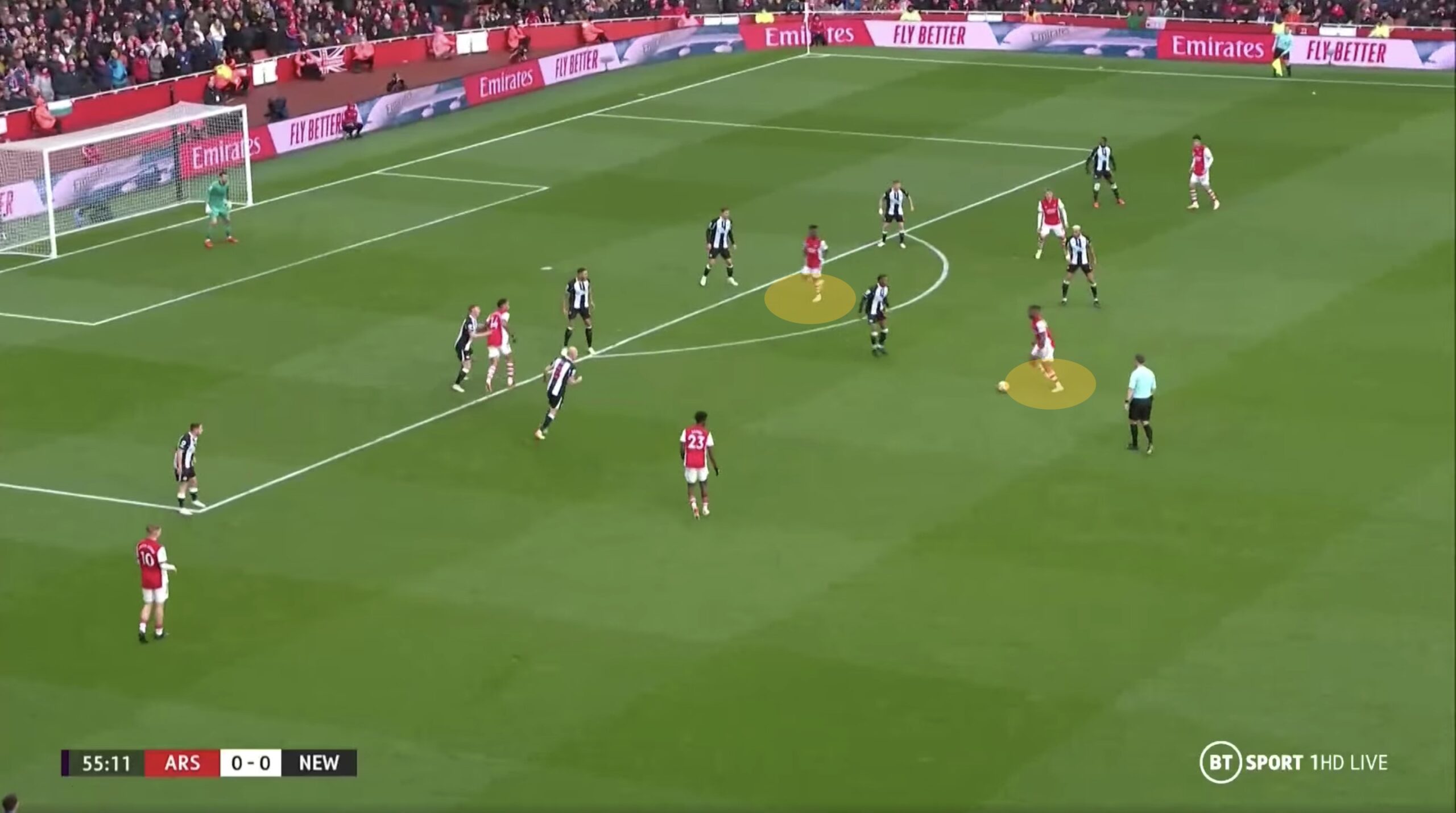 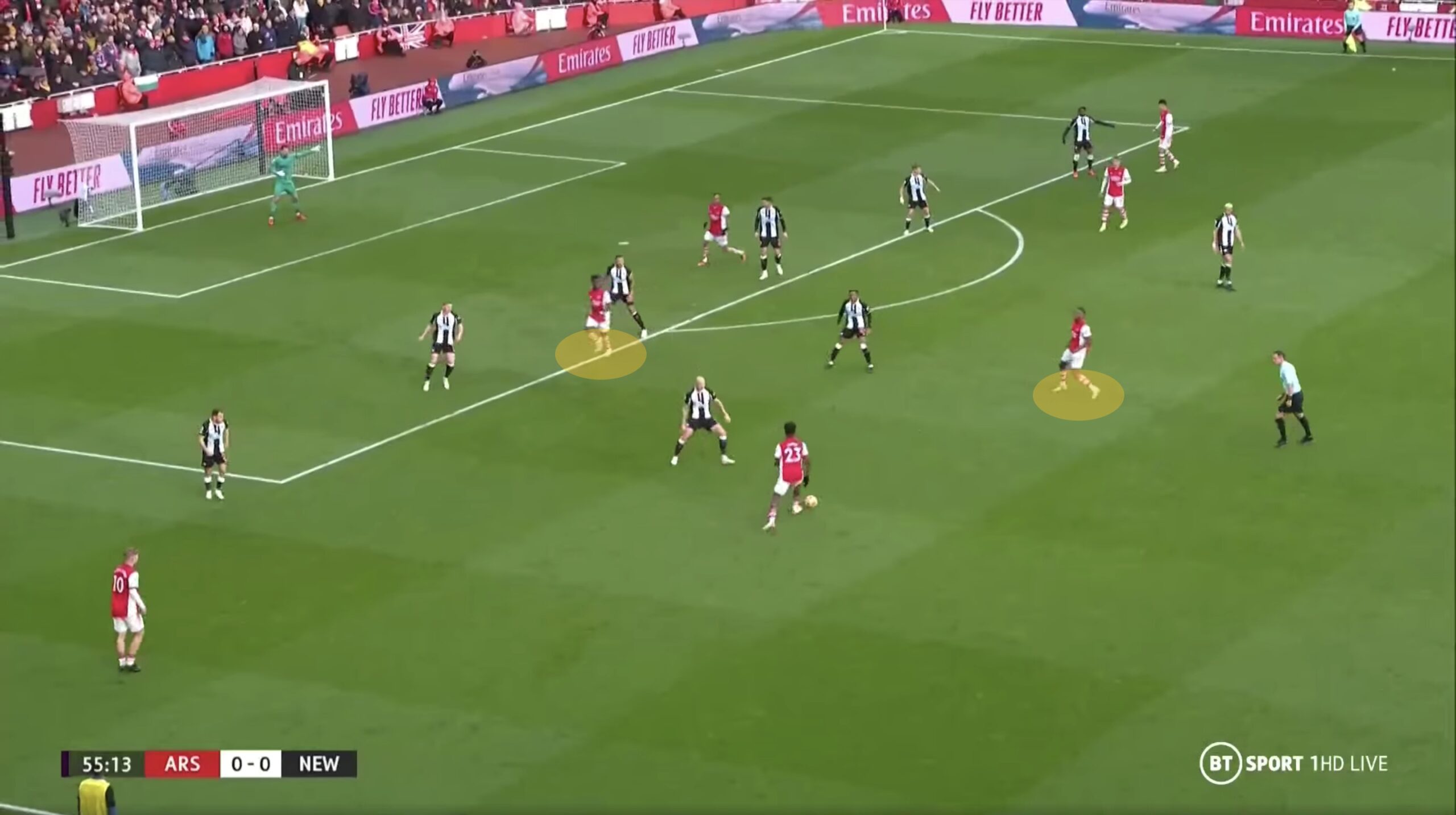 Within the space of a few seconds, Saka had moved all the way across the pitch and Tavares had moved away from the penalty area and exchanged passes with Sambi Lokonga.

By time Saka received the ball, 17 seconds after his last touch, he had moved from a Partey-esque position on the right just in the Newcastle half to the sort of area you’d expect to see Arsenal’s left-winger. As he was finally picked up, creating space in the area he left, Tavares moved forward again, unmarked. 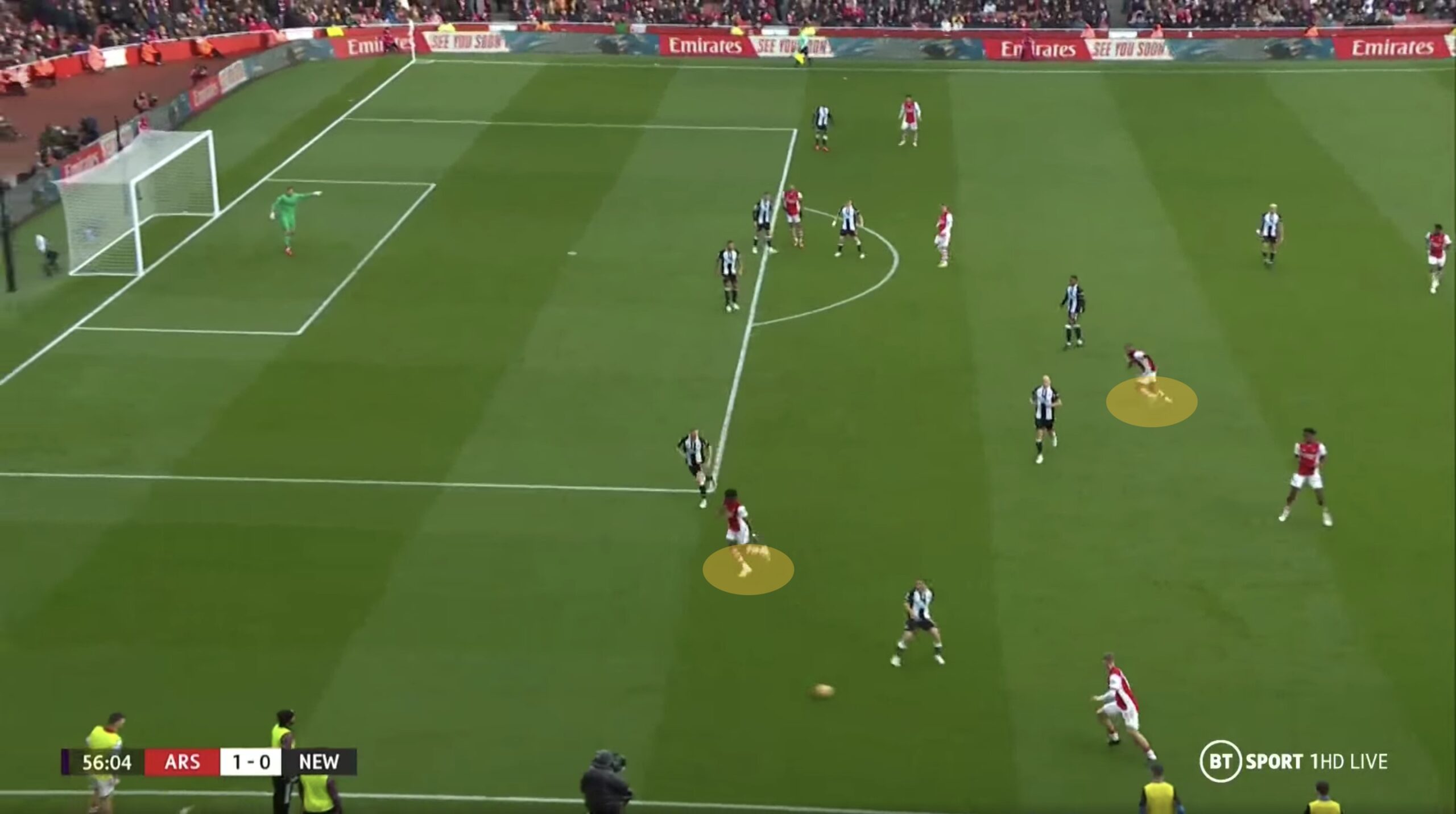 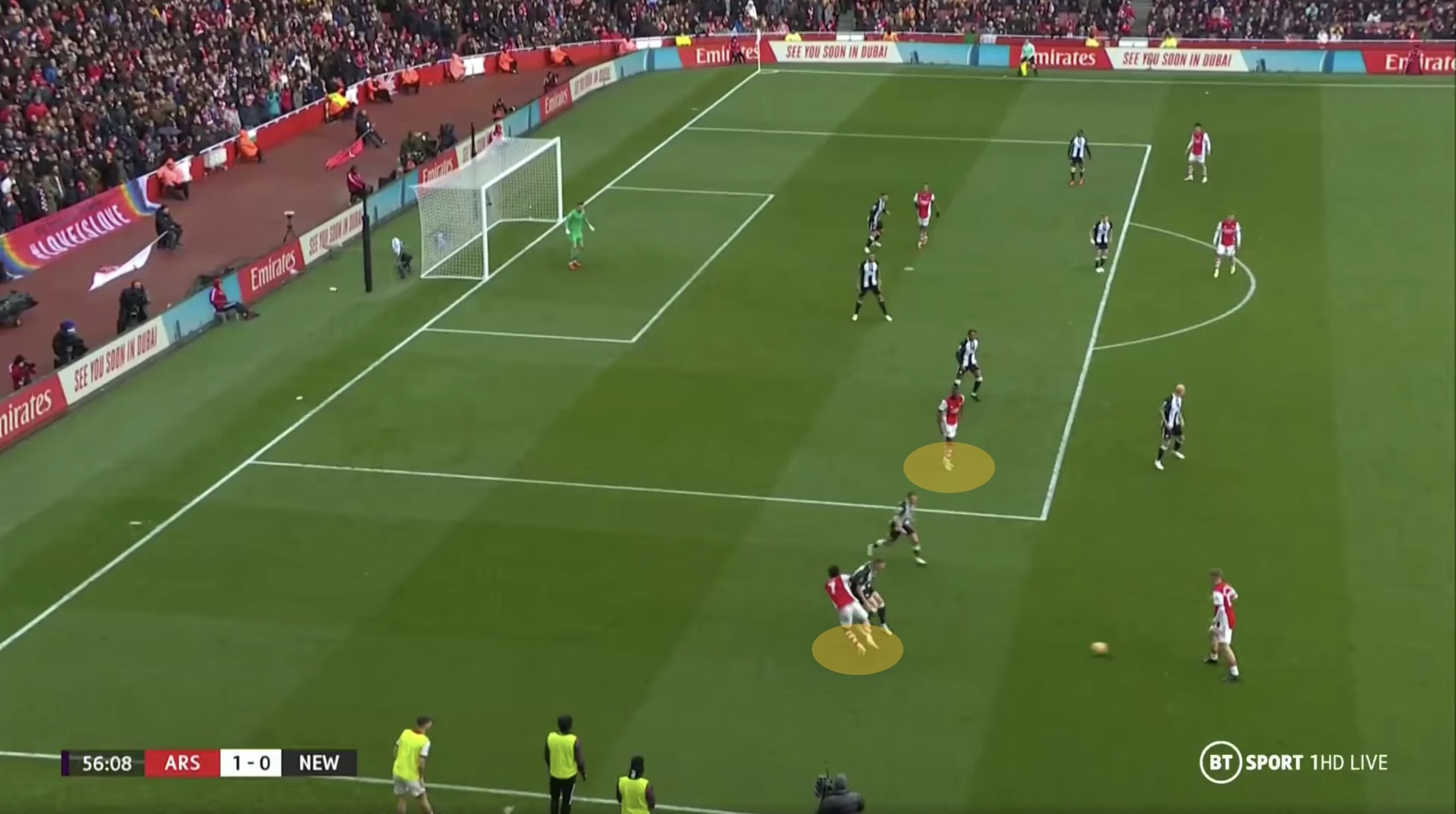 The pair combined and Arsenal were ahead.

There were similarities in the second goal. Arsenal had their typical, predictable, expected five-man front-line occupying the Newcastle defence as Ben White received possession. Everyone is where you would expect them to be. 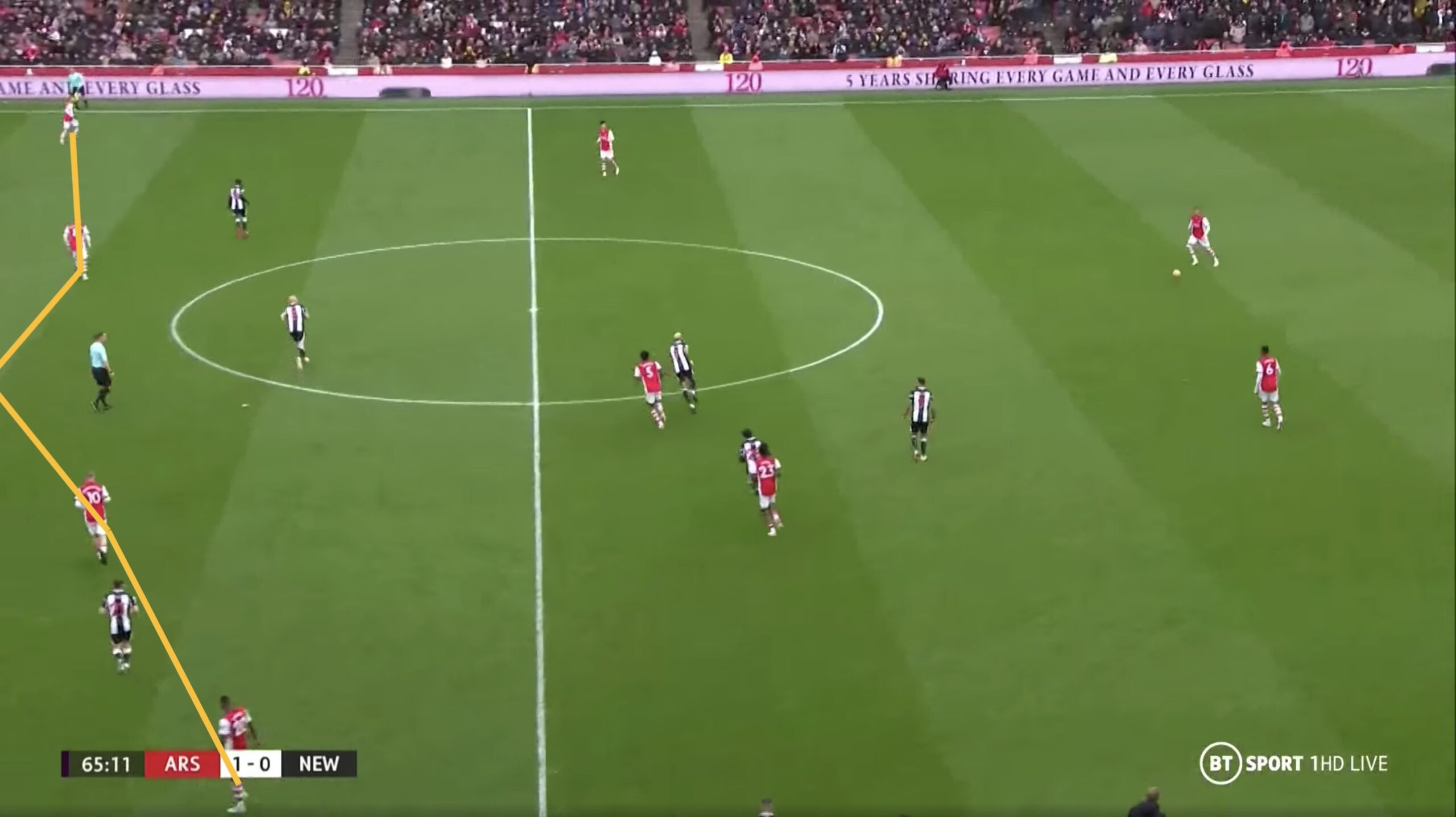 But as White moved forward and Martin Odegaard and Pierre-Emerick Aubameyang moved towards the ball, bringing Newcastle defenders with them, Gabriel Martinelli made a run in behind, offering the sort of threat that Arsenal so often lack.

Making that run opened up space for Tomiyasu to overlap on the right, not the most common sight over the last two seasons, and the Japanese found the Brazilian to score the second. 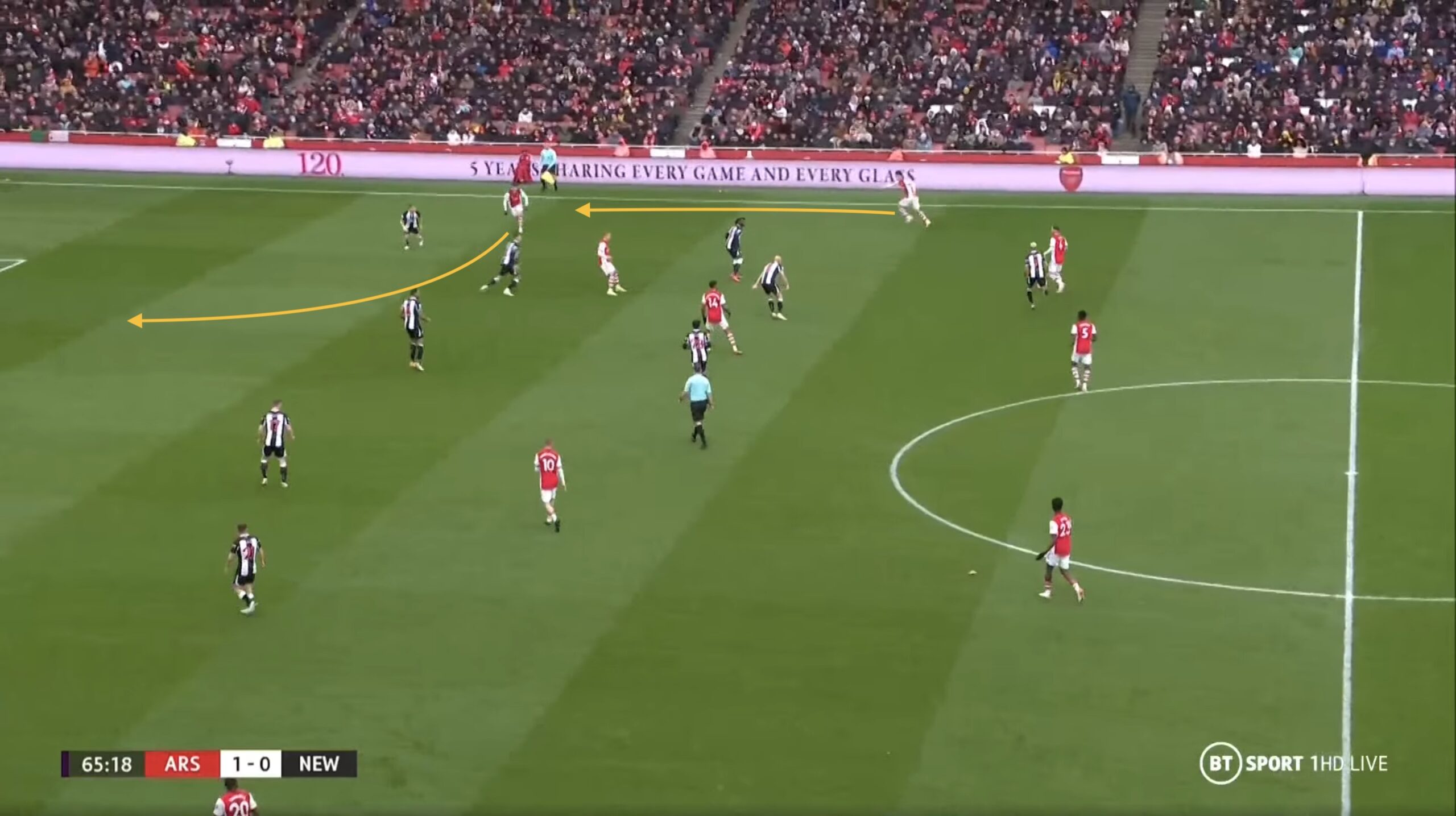 With the team struggling to create, it was brilliant to see solutions found by some of the team’s younger players, releasing themselves from Arteta’s usual structure and filling the typical spaces with a lot more flexibility than we’ve often seen from them.

Tavares is a wonderfully gifted and versatile player, much less predictable than Kieran Tierney, Saka has a superb understanding of space and where to move to combine with his team-mates, and Martinelli offers more urgency and willingness to get through on goal than any of Arsenal’s other wide options.

A less structured attack, or at least similar structures but with more variation, will be crucial if Arsenal are going to break opposition sides down with more consistency going forward.