On Monday’s Arsecast Extra we were asked a question about Ben White, and how come whenever he was referenced, his full name was used.

Other players are known by their surnames only but ‘White’ felt a little abrupt or something. ‘Ben’ felt too familiar, and we decided that even if he was called Benjamin, you’d probably drop the ‘jamin’ bit. Then during the week I noticed his Twitter referenced his full name: 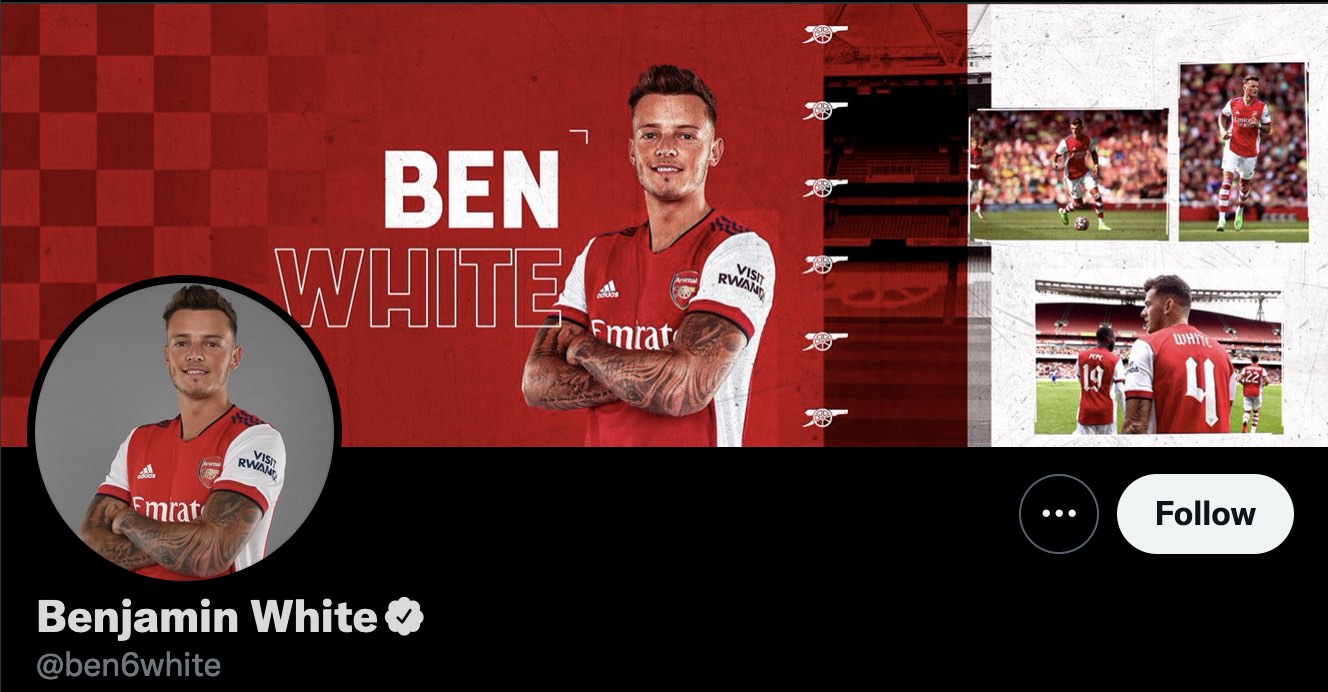 I didn’t give it much thought to be honest, but then he did an interview with Sky Sports and the interviewer expressed some surprise that his display name was Benjamin when everyone called him Ben.

“Because it’s my name,” replied the Arsenalist formerly known as Ben White said.

So now, it’s Benjamin White, because that is his name, and if that’s what he wants to be called, then who are we to decide otherwise? For example, if I wanted to be called by my full name: Andrew Hieronymus Argyle Steve Dallas Winston Mangan, I would expect people to respect that.

Maybe Ben reminds him of a very gentle bear and he doesn’t want to be associated with big bear and all their various chomping and hibernating; perhaps he cares little for the films and antics of Ben Affleck. I guess we will never know, but he is now Benjamin White and that’s that.

I also saw people express surprise when he talked about how he doesn’t really watch football, and has never really watched football. He was asked about Patrick Vieira, and said:

I didn’t ever watch football when I was younger. I still don’t now. I just loved the game, I was always playing it, never watching. So I don’t know too much about the older generations, but I know Vieira was a very good player. But I don’t know the details.

You come in every day giving 100 per cent. All I want to do is go home and not think about it, then come in in the morning fresh and ready to give 100 per cent again. I watch myself for analytical reasons. I watch England, maybe, but I’m always busy doing something. I wouldn’t just sit down and watch a game.

I get why that might sound weird to some people. As fans we are a bit obsessed with the game, but even within that there are levels. There are people who will watch every single game they can, in various leagues, building their knowledge and understanding of teams, players, tactics etc. And there are people whose interest in football doesn’t go far beyond the team they support, and they don’t care much about watching anyone else.

Why wouldn’t this be true of players? We know some of them are football crazy, but for many it’s simply a job. Benjamin White says he loves playing, there are others who have a much more clinical outlook on their careers. They don’t love it, they’re just exceptionally talented so they do it to earn a living.

I think many people view a footballer that doesn’t watch football with suspicion, as if they can’t be good at it because of that. Here’s a little thing to consider: every person on Twitter who took exception to Benjamin White not watching football (which let’s face it, is just another thing for angry people to be angry about because they always have to be angry about something) – he’s better at it than every single one of them. Much better. There is no correlation between how much time you spend watching the third tier of German football on TV and how good you are at football, funny that.

The other thing to point out is that despite this being top level sport, it might be considered beneficial to have other interests outside your work. Benjamin White says he wants to come in to training 100% focused, and if doing other things apart from football is what helps him to do that, who is anyone to question it? Once those things are the right things like drinking booze and being a lad, and not anything like fashion or the environment of course, because some still can’t square the circle of a footballer having a conscience or social awareness.

Right, let’s leave it there for this morning. We’ll have a preview podcast over on Patreon in a little while, so please join us for that. For now, this is Andrew Atticus Randall Mortimer Tobias Whitman Mangan III signing off.

ps – There were good theories/discussions about Ben White, whether it was two syllables or something else, but somebody (I forget who now, sorry!), suggested it might be because white is a colour and that somehow influences the ‘full name Ben White’ thing. I suspect that’s a big part of it.

Previous articleJust get another one of those unique things, it’s easy
Next articleSunday round-up: Premier League fun, Reiss Nelson