Leicester 0-2 Arsenal: The one with Aaron Ramsdale

Another win, another clean sheet, another three points. It feels, still quite cautiously, as if something is beginning to build with this Arsenal team.

With Ben White available having recovered from midweek illness, Mikel Arteta was able to pick the same side that played so well against Villa, and much like in that game, we began really brightly. I have to say, I’m really enjoying this aspect of our recent performances, because it wasn’t too long ago that a first half in which we didn’t do a great deal felt way too familiar. This is much different, much better, and I notice too we’ve done away with the long punt (not Peter Crouch) from our kick-offs.

Leicester had some issues with the first goal, believing there to be a foul before the move which led to the first corner, from which we got a second corner. Bukayo Saka delivered it, there might have been the slightest touch from Vardy, but Gabriel’s movement and desire to get on the end of it saw him flick a lovely header into the far side of the Kaspar Schmeichel’s net. No less than his recent performances have deserved, and a lovely way to settle us down against tricky opposition.

It was pretty much all Arsenal in the opening stages, although a White foul gave Maddison a free kick chance with which he hit the wall. Partey forced the keeper into a save, but when Maddison lost possession, Arsenal broke forward through Saka down the right. There perhaps a touch of good fortune in the way the ball squirted off Lacazette then a defender into the path of Smith Rowe, but the attacking intent was there, and the young midfielder was on his toes, timed his run perfectly, and squeezed a lovely finish through a clatter of legs to make it 2-0.

Leicester came back into a bit, as you’d imagine, but let’s just fast forward to the best bit of the entire game: the Aaron Ramsdale save. I enjoyed it immensely at the time, I’ve enjoyed it repeatedly since, I enjoyed Ian Wright doing Ramsdale doing the ‘You’re shiiiiiiiiit-aaaaahhhhh‘ on Match of the Day without being able to say the word ‘shit’, but let’s just delve into this and mine this for all it’s worth.

It was another White foul which provided Maddison with the opportunity, this time a little closer to goal. Ramsdale set up his wall and stood to the right hand side of it. He said afterwards he was worried Maddison might curl it over the side he was standing, but he clipped it over the wall and it was heading in. If you listened to Friday’s Arsecast, David Seaman spoke about Ramsdale’s foot speed as one of most impressive parts of his game, and he needed it to get all the way across – look where he is:

It’s a very good free kick and I think 99 times out of 100, that’s a goal. Arteta said he thought it was a goal. You can see James Maddison start to wheel away to celebrate before putting his hands to his head in disbelief: 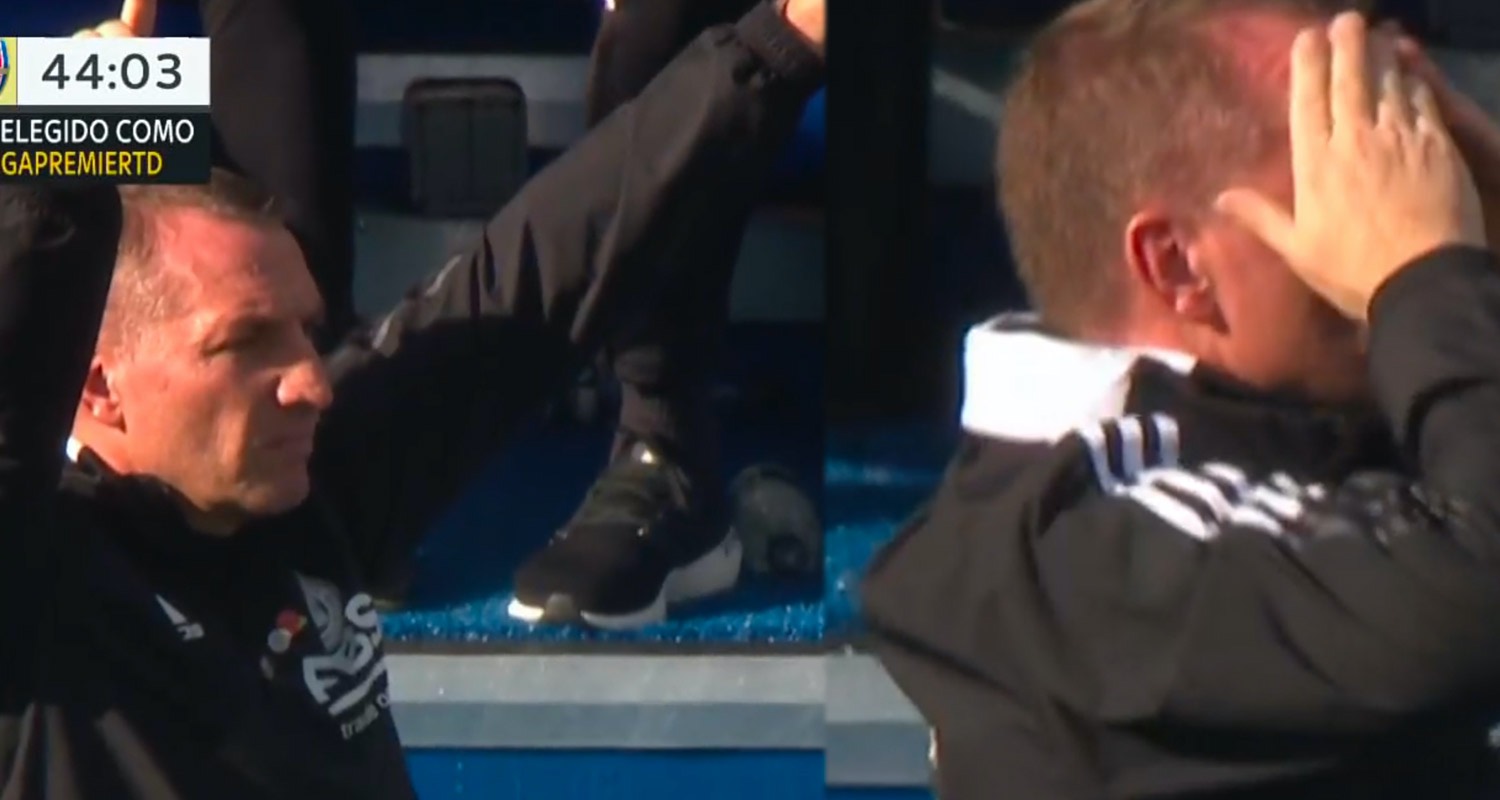 It was not a goal. Jonny Evans followed in, perhaps there was a touch of good fortune as the rebound skronkled across the line, but Thomas Partey was alive, following into to make the clearance.

You know it’s a good save when Peter Schmeichel, father of the opposition keeper, immediately takes to Twitter to talk about how good it was. Genuinely, an astonishing stop, and it’s no wonder the away end started chanting “England’s number 1” for the man who is now well and truly Arsenal’s number 1.

It wasn’t the kind of game he could rest on his laurels on either. Ramsdale was busy, busier than we’d have liked as Leicester’s two half-time subs gave them second half momentum which required a number of very good stops from the Arsenal keeper. A couple of efforts flashed wide, but it was a Gandalf-esque ‘You shall not pass’ performance from Ramsdale. He was not going to be beaten. You could see that in the way he played, how quickly he read danger, and made sure he kept the clean sheet that his performance well and truly deserved.

I’ll leave it for others to write the think pieces about him overcoming the odds and all that – and I think they deserve to be written – but it’s impossible not to love what he’s done since he came into the team. He makes watching Arsenal fun, in some ways. I don’t quite know how to explain it, but we’ve been through a period when a lot of what’s gone on has been a bit of a chore, and to have a character like him backing that up with performances like that is just so enjoyable. You’d have to have a cold, cold heart not to have connected with this lad already.

Mikel Arteta spoke about him afterwards in glowing terms, obviously, and on the prospect of him being England’s number 1, said:

I think when you dream big, it is always positive. Keep your feet in the earth, there are people who make those decisions but he needs to be doing what he’s doing every day. Train the way he trains, look after himself the way he does, have that mentality he has, and good performances. The rest will come.

I like this, especially in relation to his answer about being pleased at moving into 5th place in the Premier League (at the time):

So much of football opinion is short-term, good and bad, and what we’ve done since the opening three games of the season has been pretty positive. It’s nine games in all competitions, seven wins, six clean sheets, and we’ve seen some great individual performances and some very good collective ones too. However, we’re still in October (just), and there is a long, long way to go this season. I’m glad the manager can acknowledge the improvement without going over the top, because producing consistently is how we started to permanently change our trajectory. Not just for one month or two months, but for the seven months that remain this season and beyond.

Taking three points away at Leicester is a fantastic result, not just because of the points, but because they are a team we’ll be competing with for a top six finish in the league this season. We helped ourselves and we hurt them, but it’s done now, and we have to get fully focused on the next game. It sounds a bit clinical, I realise, but we can enjoy what we did yesterday and still look for further improvement. I’d much rather hear that from a manager after a game like this than some kind of riposte to the criticism he got earlier in the season, and I think there are plenty who would have been tempted to do that.

We played well, we earned the points, thank you very much, well done, close the book. Next game. Keep building the momentum, because the more we do that, the more days like this we’ll have to enjoy.

Just a final note, and I know it’s been discussed elsewhere, but refereeing consistency is on the agenda again after Jonny Evans escaped a red card for a foul on Aubameyang which was the same – if not worse – than the one Laporte was sent off for in the Man City/Crystal Palace game. It was extremely high on the IfTWGX scale in my opinion. Ultimately, we won so it’s easy enough to just bypass it, but that should be one the Premier League need to look at. It’s either yellow for both, or red for both. You can’t have scenarios where one team is refereed differently than another to that extent. Anyway, it’s nothing because we won, but still worth mentioning.

Right, I’ll leave it here for this morning. Enjoy your Sunday, watch the game again, marvel at the replays of the save, and I’ll be back tomorrow with more, plus what’s sure to be a goodly morning and an Arsecast Extra with James.