If you went into the Aston Villa game looking for something which demonstrated this team had more to it than you feared after the way they played against Crystal Palace, last night was exactly that. It was the perfect riposte to a performance which was underwhelming and worrying in equal measure, and there was so much to like about it.

Mikel Arteta made some changes, with Alexandre Lacazette, Albert Sambi Lokonga and Nuno Tavares all coming into the starting the line-up. Just as we did against Palace, we came shooting out of the blocks, starting brightly, but this time we were able to maintain it. By half-time we were 2-0 up, but the graphic Sky Sports put up told its own story.

To be clear, you really didn’t need stats to tell you we were on top. You just needed eyes. The difference in performance from Palace was unreal, like chalk and cheese. We dominated the game, Villa couldn’t get near us, but even when they did get hold of the ball, we chased them down, hunted in packs, pressed them, won it back, and crucially – for me at least – we competed for, and won, the second ball time and time again. We were secure and dynamic in possession. All the things that frustrated me about Monday were gone, and it was great to see.

With that comes the ability to cause the opposition problems, and we did that almost from the first whistle. By the time Thomas Partey headed home his first Arsenal goal, he’d already hit the post, and Arsenal had had seven other attempts on goal. This was by the 23rd minute. You wondered if we could keep it going, and we did. There was a big chance for Saka which drew a very good save from Emi Martinez, Partey headed not far over from a corner, and then just as the first half appeared to be over, there was drama.

I think it’s the timing of it that made it so contentious, to be honest. The challenge on Lacazette looked like a foul to me, albeit one that an experienced player drew well, but with just seconds of the two minutes of added time left, there was a VAR check, and the referee pointed to the spot. I have to say I wouldn’t have been fuming if it hadn’t been given (using my ‘if it were up the other end’ method of gauging a penalty), but it was and Aubameyang stepped up. Martinez saved it, but the captain stuck the rebound away, much to our delight and to the despair of the former Arsenal keeper.

Just on the time thing – which seemed to vex the Villa manager afterwards – isn’t the ‘added time’ a minimum of two minutes, and not ‘precisely two minutes to the very second’? I don’t really understand what all the fuss is about there. Referees routinely play more injury time than the board suggests. Based on our first half performance though, the two goal lead was no less than we deserved.

As expected, Villa made changes to shape and personnel after such a dismal first half showing, and it made an impact. Aaron Ramsdale, who had been basically a spectator (with some sensational passes), was forced into an early save. Ben White made a superb block as his partnership with Gabriel continued to develop nicely, and there was more to the visiting side in terms of the threat they offered.

However, the third Arsenal goal summed up something for me: the performance of Emile Smith Rowe. It is hard to single out individuals on a night like last night. I thought Lacazette had a very good first half, bringing a bit of industry and grit to our attacking game; Tavares was great fun, charging up and down that left wing and producing in the opposition final third; but Smith Rowe was a cut above, illustrated perfectly by his 56th minute strike.

Look where he is as Villa try and make progress down the left hand side: 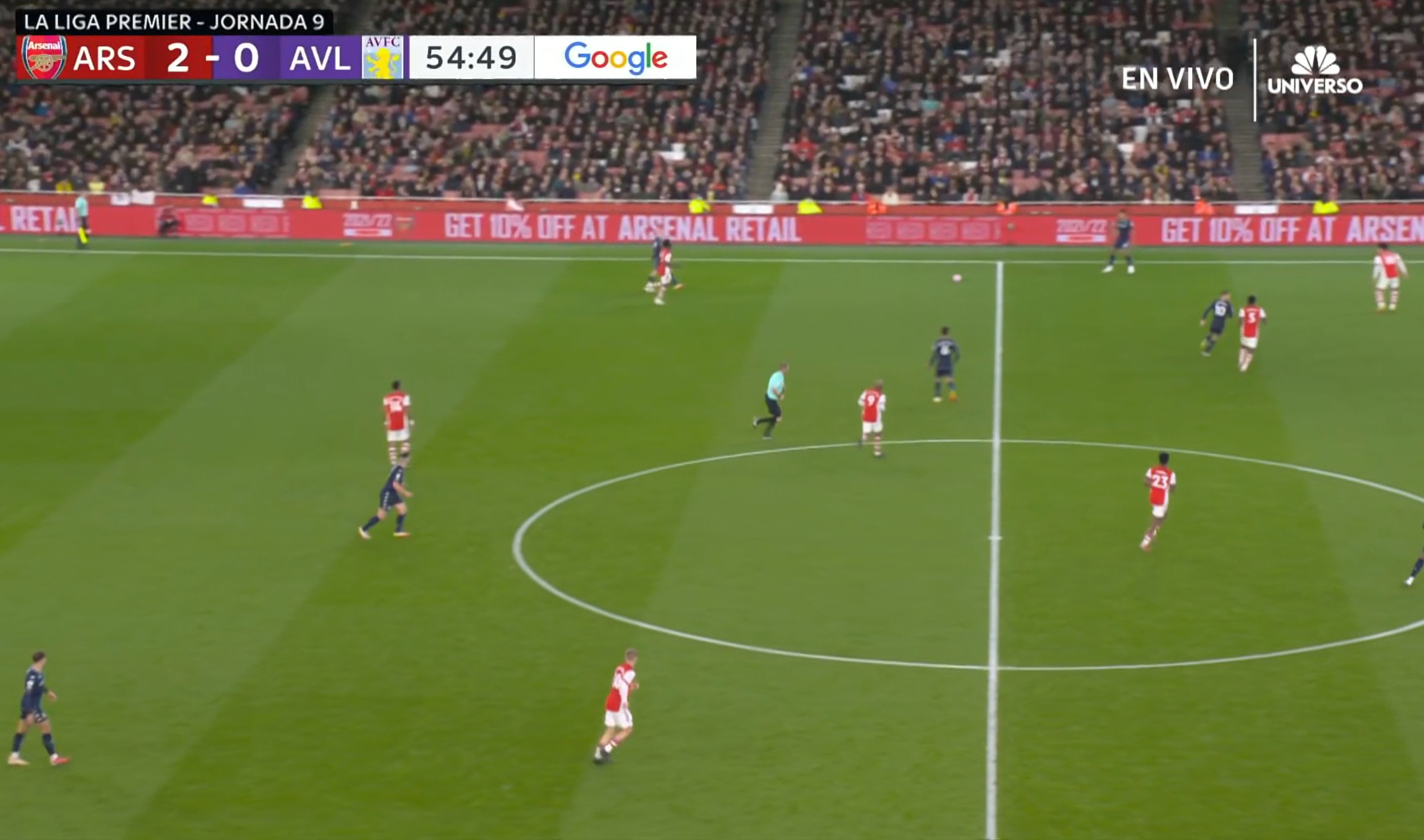 Now look where he is when he intercepts to spark the counter-attack: 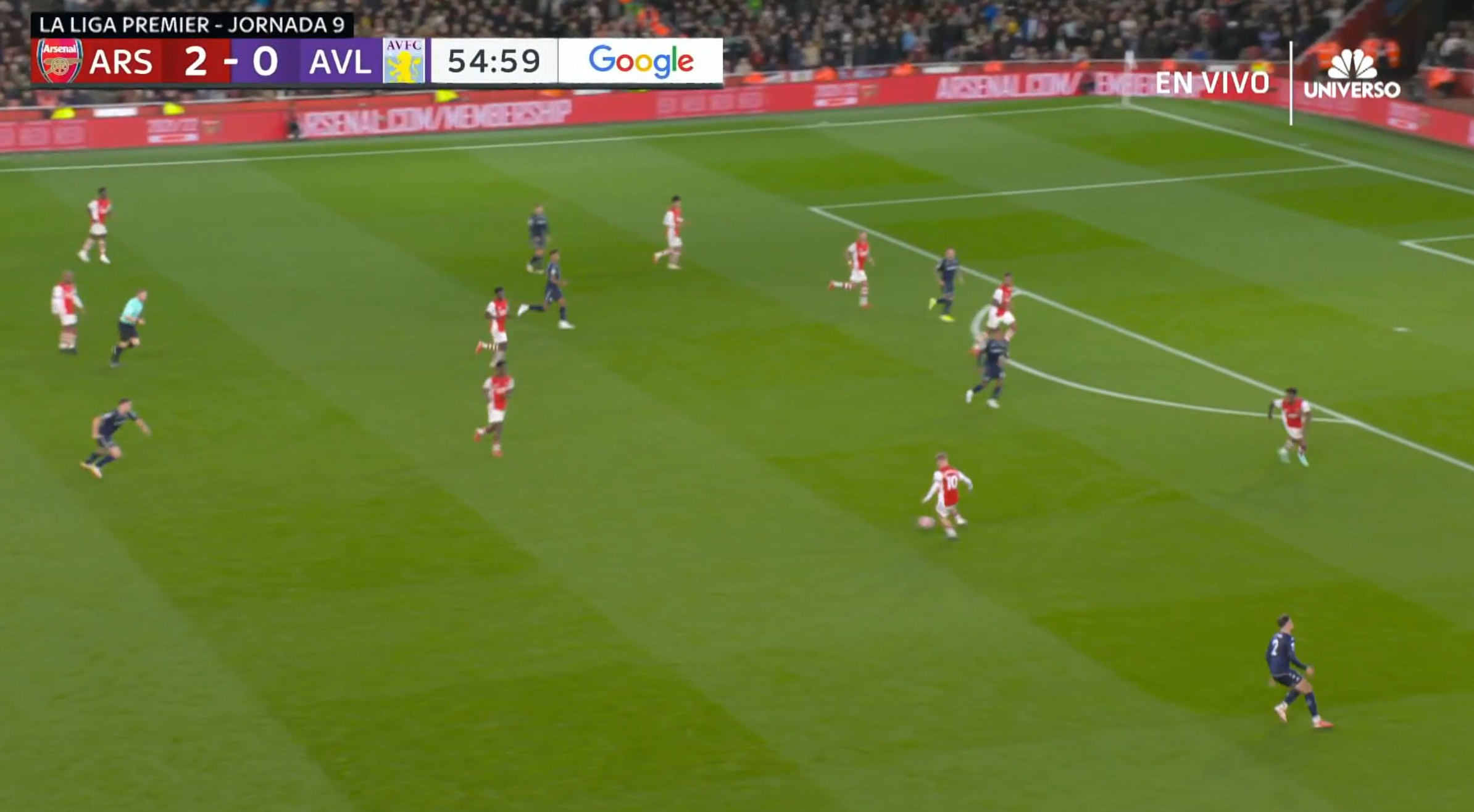 He doesn’t stand watching though, in much the same way as he did to provide the assist for Aubameyang against Sp*rs, he immediately gets on his bike, sprints beyond less committed opposition players, and a few seconds later, this is what happens: 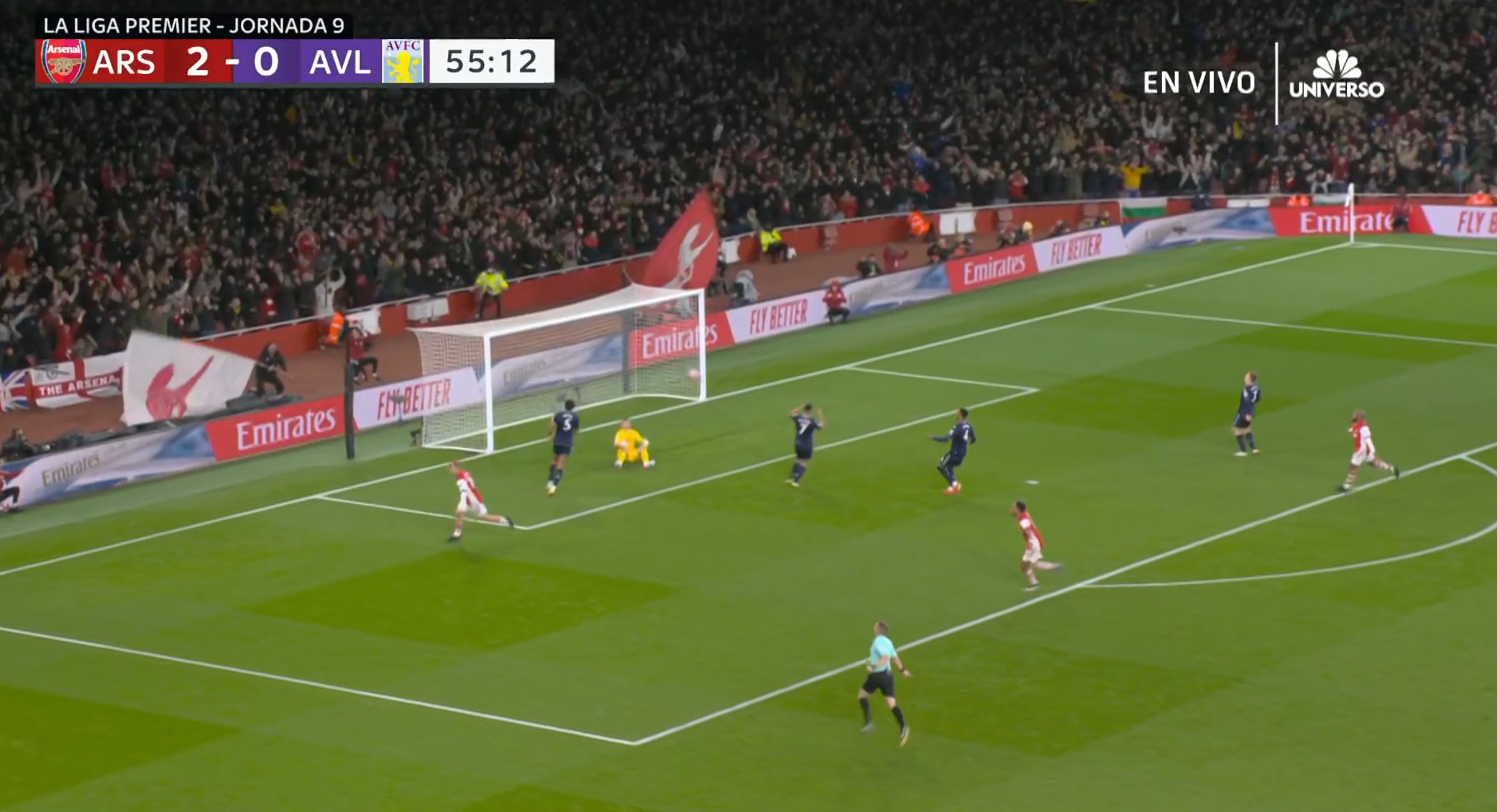 Sure, there might have been a bit of luck in the finish, but the old maxim about how you make your own luck applies here. The desire he showed to get back and do his defensive work was coupled with his desire to get forward and make an attacking impact, and it’s great to see. Afterwards, Arteta said of the 20 year old scoring again:

That should be a habit and he should demand that in his game, because he’s capable of doing it. I’m pleased he’s developing that. He still needs to develop more in other areas. The other night he wasn’t 100 per cent fit but he made a step forward and wanted to play with a difficult injury that he had. He wasn’t complaining, he was just looking forward. He’s changed the way he’s living a little bit as well, and some habits that he had. He’s been superb.

It was a man of the match performance for me, and when you consider that pretty much every single player out there played well, it shows you how good he was. Collectively and individually we did everything you could want. Lacazette went off because he was fatigued, and I’ve seen some suggest that was a kind of turning point, but I think it was more the withdrawal of the impressive Lokonga for Maitland-Niles that made us a little less effective in the closing stages. He was on a yellow though, so I can understand it.

Villa did get a goal, and a very fine finish it was too, but it was a bit of a bolt from the blue kind of strike. In some ways it’s a shame we didn’t keep a clean sheet, but really I don’t think it’s that important. To be honest, I’d rather play like we did last night and let a late goal slip than huff and puff and scramble a 1-0. This kind of performance is so much more convincing, it gives you so much more to work with and to believe in, so if the cost of that is a goal and a bit of nervousness in the final 10 minutes, I can live with that.

Arteta said of the performance:

What I liked the most was the way the team reacted from Monday evening – how we finished the game and how they were in the dressing room, accepting that it wasn’t good enough, that we played to a really good level in some parts but at a level that was not acceptable in others.

We were alive tonight.

The thing now is to keep doing it. With a young team there are always going to be inconsistencies in terms of performance, but even if you don’t play as well as you know you can, you should be able to compete. We saw both aspects executed brilliantly last night, and while it’s too reductive to say this is a blueprint of sorts, I think there would be more patience and more understanding if and when things don’t quite go our way, if the team shows that kind of commitment to the nitty-gritty of the game.

All in all, a very pleasing night, and I hope that it’s something we can build on. We’ve been a bit one step forward, one step back under Arteta, so if we can go one step forward, then another step forward, that would be very nice indeed. Finally, a quick word for the fans who were in great voice, helped obviously by the way the team played, but it feels like there’s a real connection building, and something of an us against them atmosphere inside the ground which is great.

A Friday night win is a fun way to start your weekend, so enjoy the rest of it. James and I will be recording the Arsecast Extra for you tomorrow as well, so we can relive this a bit sooner.