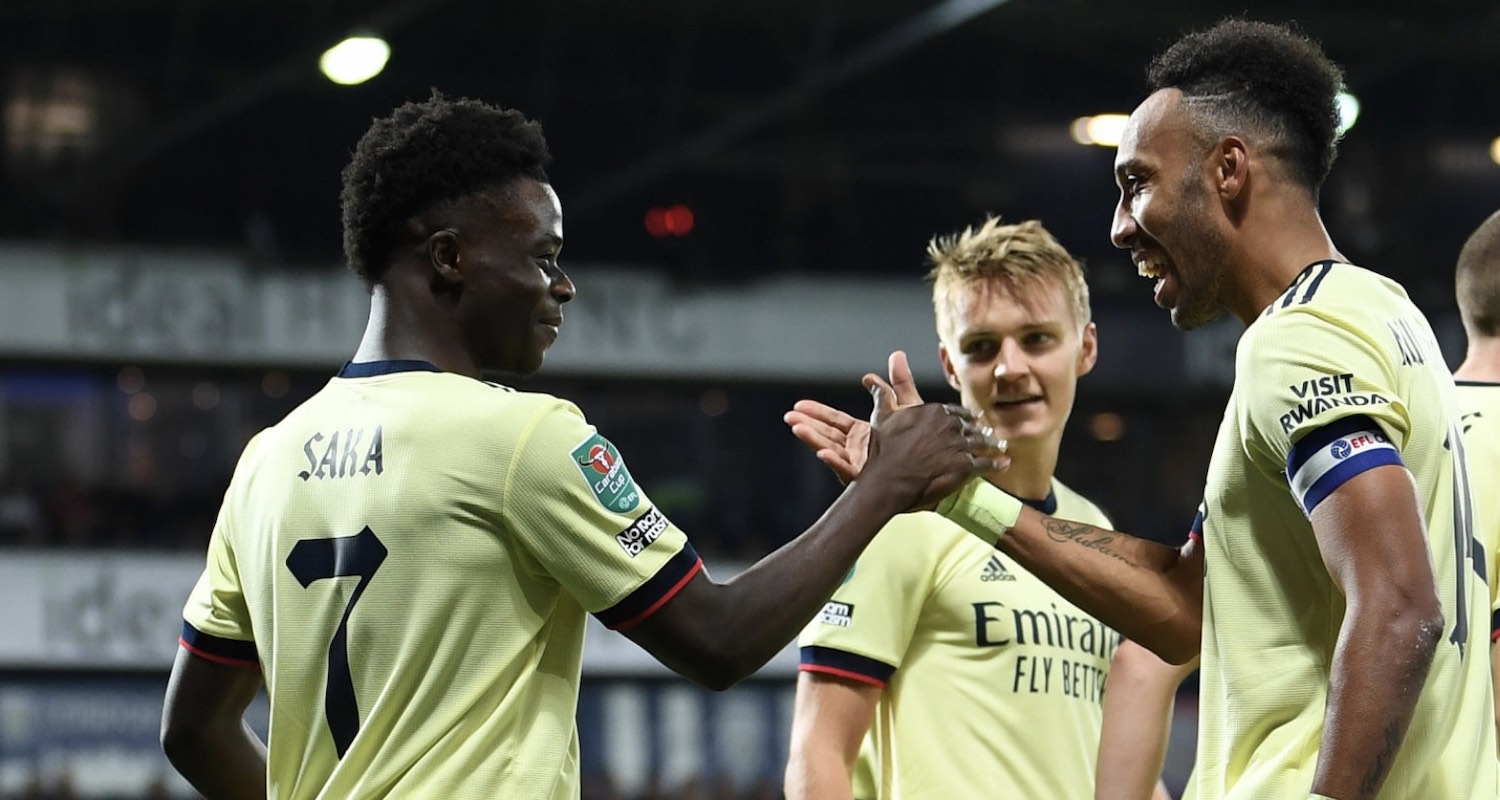 It’s a shame I have to start today’s blog with a disclaimer, but such is the world we live in: Yes, I am aware this was just the league cup; I know West Brom are a division lower and played a team full of kids; and I am fully cognisant of the fact we lost our first two league games. Thank you.

After a couple of weeks in which pretty much everything seemed to go wrong, it was nice that some things went right. We won a game, scored some goals, and under the circumstances we got everything we could possibly have wanted from this fixture.

A couple of delicious poacher’s goals to kick us off, but watch the movement and the sharpness for the first one in particular. As Bukayo Saka’s shot is saved, he’s already anticipating where the ball might go. Before the defender even wakes up to that, the ball is basically in the back of the net.

The third, the hat-trick goal, was the pick of the bunch in terms of the finish, curling it into the top corner, but again, look at how quickly he takes the shot after picking up the pass from Ainsley Maitland-Niles and cutting onto his right foot. I thought Aubameyang looked quite sharp during his Chelsea cameo, so this wasn’t a huge surprise, but to get off the mark like that in his first game of the new season is very pleasing. He had four shots, all of which were on target, and scored three times.

I also maintain the below is completely, 100% true:

Aubameyang’s absolute refusal to use up any of the goals he has left in him during pre-season is genuinely impressive.

I’m just happy that today we won this game. It’s good for the confidence of the team, we know we had a tough start to the season but the only thing I can say is that the commitment of every player is always there 100 per cent. We tried to give our best to give the fans what they want; winning games.

The £24m signing was handed his debut last night and can be pleased with his night’s work. He made a couple of decent saves, the fans sang his name from early on, and he kept a clean sheet. I don’t think he could have asked for more from his first appearance for the club.

It’s early days, obviously, and the sample size is very small, but I thought there were signs that with the ball at his feet he’s capable of finding some very interesting passes. I’m interested to see how that aspect of his game develops.

Odegaard added some oil to the engine

It’s not completely new for the Norwegian having spent 6 months on loan last season, but he got a good hour under his belt and really kept things ticking in midfield. His flicked assist for Bukayo Saka was lovely, but owed plenty to Aubameyang’s awareness in letting the ball run. Welcome back, Martin.

Bukayo Saka is back

He had a difficult day against Chelsea, but last night he looked much more like his usual self. His right footed finish was a nice way to finish Odegaard’s clever pass, but the 19 year old was lively throughout. His shot led to Aubameyang’s first goal, he was integral to Pepe’s goal with a gorgeous burst from midfield, and you could almost see the confidence return as the game went on.

There was a bit of a late scare when he got hacked down, and I have a bit of a worry that it won’t be the first time we see that this season, but he got up, shook himself off and finished the game.

Nicolas Pepe scored one, and could have had more. His left footed shot hit the post but Aubameyang was there to tuck home the rebound (his penalty box positioning was perfect and it showed the benefit of playing the captain through the middle). The Ivorian also hit the bar with a delicious, but very slightly meaty, chip, and created a goal for substitute Alexandre Lacazette.

Like Aubameyang, it was good to see the Frenchman get off the mark in his first game back. We’re a team that lacks goals, and while there’s a lot more to it than simply confidence, it does play a part too – so for these guys in particular to produce is encouraging. It will be more difficult at Premier League level, but let’s not quibble about that this morning. We need positives right now, and to score six away from home is exactly that.

I feel like this tactic of scoring goals, not conceding any, and winning games is one we should apply more often. In seriousness, you can only beat what’s in front of you, and we did that. Whether it provides us with enough of a boost ahead of Saturday’s trip to Man City remains to be seen. I’m a little doubtful, to be honest, but you never know in football, so let’s see what happens.

Mikel Arteta meets the press later today ahead of that one. Whether we have any updates on some transfer stuff we’ll have to wait and see. Lucas Torreira is gone to Fiorentina on loan, and clearly there are others who could well be on their way too before the window closes on Tuesday. Even a couple of the lads who played last night are halfway out, so it’ll be interesting to see what the next few days brings. Press conference coverage on Arseblog News as always.

Right, that’s it for now. Back tomorrow with more and a brand new Arsecast. Take it easy.